A server who was tipped $2,000 from a generous customer never got the money. Her employer decided to give her the tip amount, plus the cost of the customer's tab. 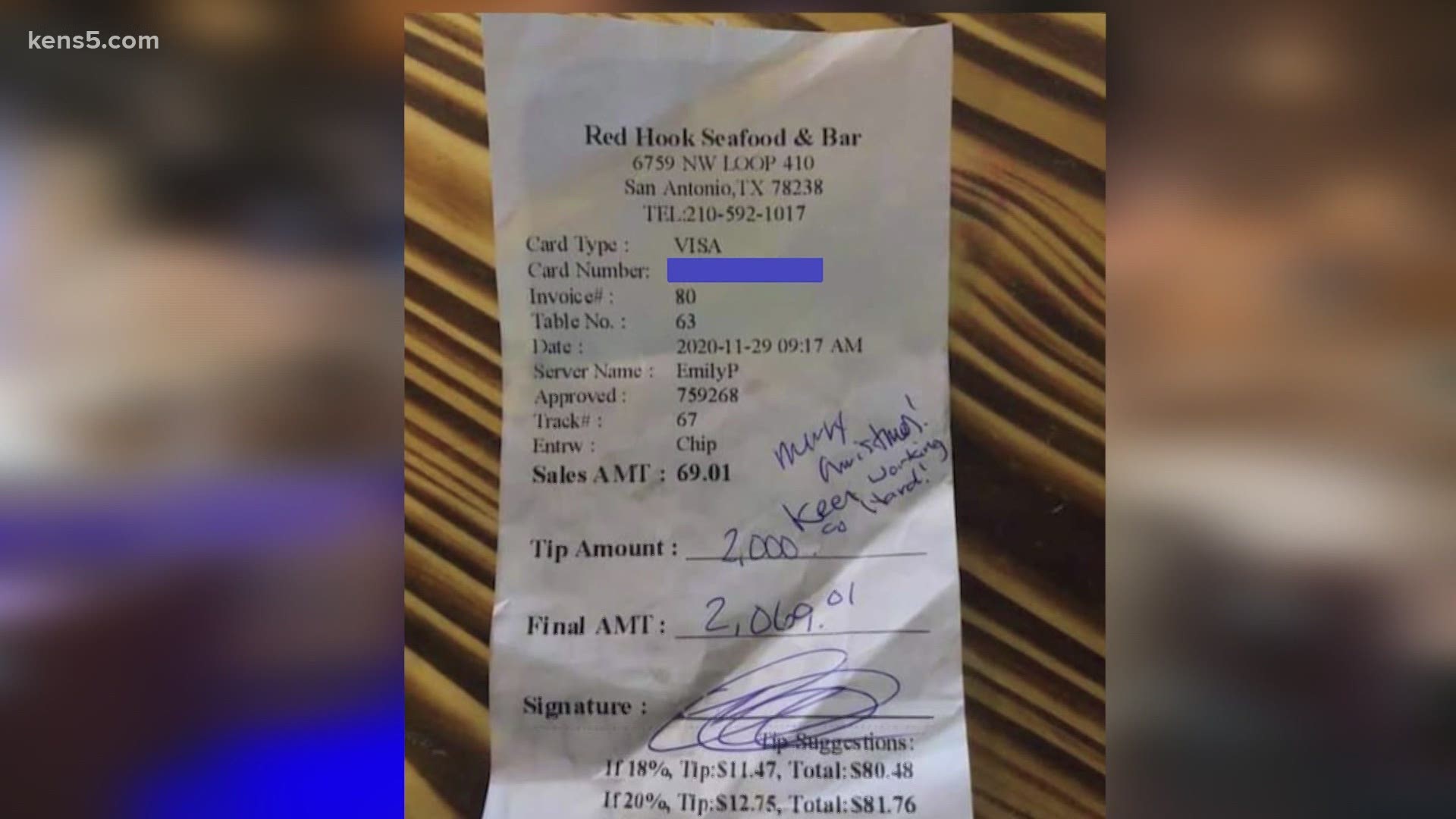 SAN ANTONIO — A server who was tipped $2,000 from a generous customer over the holiday weekend never received the money. Now her employer says it plans to give her the full tip amount, plus the cost of the customer’s tab.

Emily Bauer has been a server at Red Hook Seafood and Bar located on Northwest Loop 410 for about two weeks. She said she was busy with several customers Saturday when one man extended an empathetic hand toward her.

Bauer said the man told her he owned several restaurants and knew how difficult it was to be a server. After he left, she said she didn’t notice the tip amount on the ticket until she went behind the drink station. The man had given her $2,000 and wrote a note that stated: "Merry Christmas! Keep working hard!"

But Bauer hasn’t been able to get her money. She said the system at the restaurant wouldn’t allow her to process the tip, and her manager told her the limit of a tip is $500.

Fellow servers suggested the restaurant give Bauer four payments of $500, but she said management told her it wasn’t possible. She said the customer called back to see if she ever received the tip, but the general manager didn’t take down his information.

On Tuesday, KENS 5 reached out to the restaurant but did not hear back prior to the story airing Tuesday evening.  The next day, the general manager – who wanted to leave her name out of this story – and the restaurant's owner, John Cheng, shared their side. They said they had in fact tried to process the tip several times, but the transaction came out invalid every time.

They added that when they swipe cards in their system, the only customer information that's captured is the last four digits on their card. The general manager said the customer did call the restaurant to see whether Bauer received her tip, but the manager had no time to write down his contact information.

“I told him to come back to the store because we were unable to process the payment. He said, 'OK, and immediately hung up before I could say anything.' Now the number he called from was a private number,” explained the general manager.

Restaurant management said the owner called the credit card company, but it could not authorize the tip. She added they would not allow four different transactions of $500 to make $2,000. She said that unless the customer came back with the money or approved the transaction, Bauer would be unable to get it.

But Cheng said he wanted to make the situation right. He decided to write a check to Bauer for $2,069.01, which is the tip amount plus the cost of the customer’s tab.

“It’s Christmas time, and everybody is struggling,” Cheng said. “I'm ready to give it to her as a Christmas gift.”

“The fact that the owner of my job is willing to give it to me, even though it wasn’t his mess-up, I can’t thank him enough for that,” said Bauer, in tears.

The restaurant said that ever since Bauer’s initial interview, they have received backlash from the community, including verbal attacks and death threats to the owner. They added that people have placed to-go orders and never showed up to pay. They hope the community will not hold the incident against their restaurant.

Bauer apologized and called the situation a misunderstanding, saying she never meant to bring harm to her employer.

The restaurant encouraged the server to contact news media in hopes the man would come forward. Bauer shared the receipt from the customer on her social media page. The restaurant wanted to clarify that the date shows Sunday, Nov. 29, with the time stamp of 9:17 a.m. But their system was not properly updated. The manager says the customer left the tip on Saturday, Nov. 28, in the evening.

RELATED: Server gets $2,000 tip, but restaurant says it can't process a tip that big