A retired Air Force Colonel is teaming up with another photographer to help our nation’s K9 heroes in a way that's never been done before in S.A. 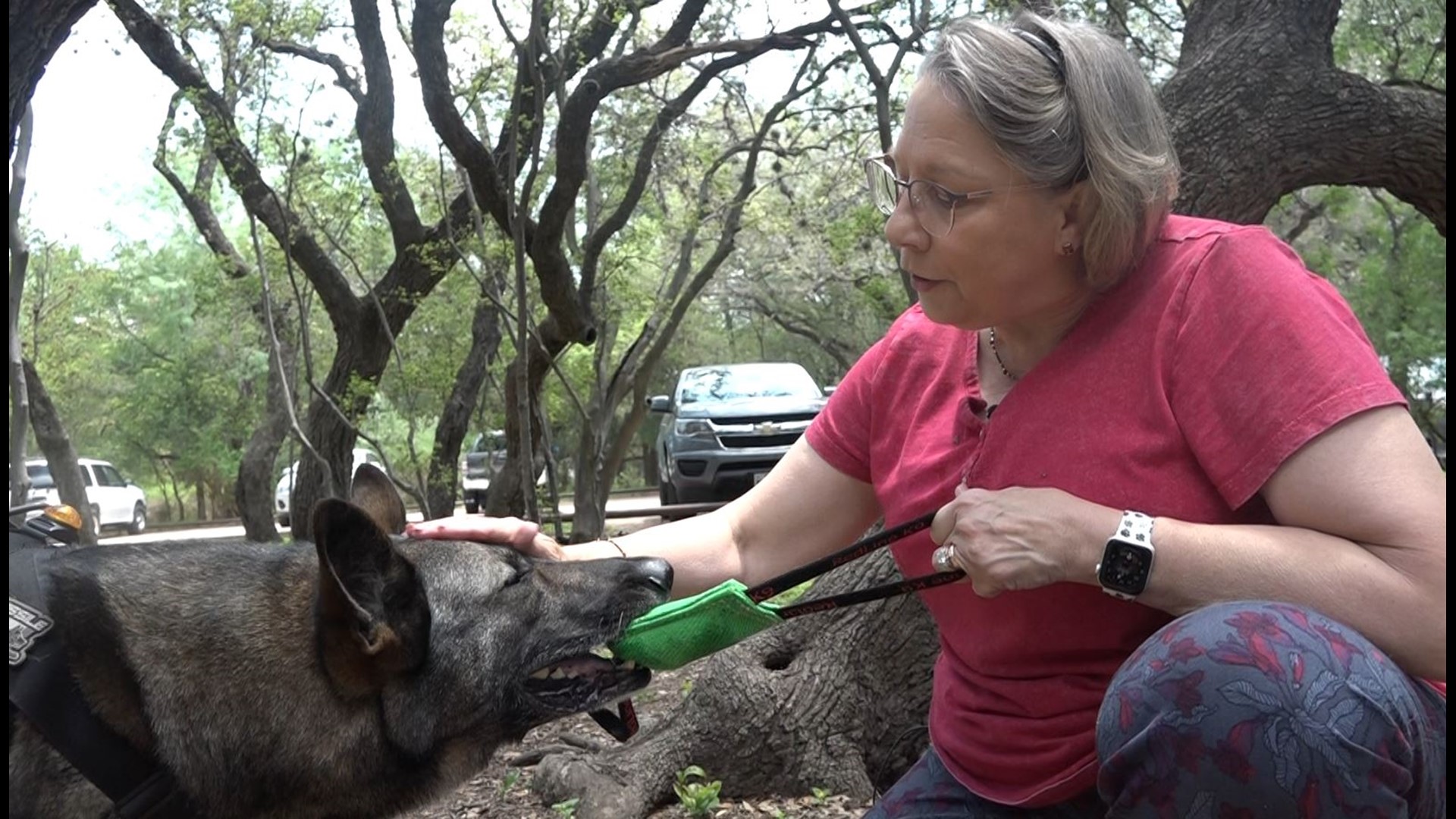 SAN ANTONIO — A retired Air Force Colonel is helping Military City USA live up to its name. She's teaming up with another photographer to support our nation’s K9 heroes.

Retired Colonel Janet Deltuva says she pursued her passion for photography after serving as a deputy surgeon general in the Air Force. She’s now the owner of Janet Deltuva of Ares and Emzy Photography where she photographs animals

Credit: Janet Deltuva
Janet Deltuva with EMZY on her retirement day at Kunsan Air Base Republic of Korea in 2010.

She named her business after two of her adopted military working dogs. Deltuva first adopted EMZY from Kunsan Air Base Republic of Korea. Her second adopted MWD is Ares, a former bomb sniffing military working dog from Lackland Air Force Base. He has become an inspiration for a new project in San Antonio. Deltuva says 5 years ago, Ares developed a growth on his paw.

“It was a melanoma cancer that can be fatal,” she recalled. “It is a very treatable cancer but expensive.”

She says Ares is with her today because of U.S. War Dogs Association, a nonprofit that supports military workings dogs through different educational and financial assistance programs. The organization helped connect her to Military Vet Specialty and Emergency where staff provided life-saving treatment.

“U.S. War Dogs went to various hospitals and asked if they would participate and not everybody could. But Mission SA Vet came forward and did. It’s something I couldn’t have afforded,” said Deltuva.

As a way to show her gratitude and help other military dogs, she teamed up with photographer, Jacquelyn Smelter. Deltuva says Smelter came up with the idea to create a travel book for dogs and they're in the process of making a first of its-kind guide, “Tails of the Alamo City.” It will showcase pet-friendly sites and landmarks in San Antonio. The book will also list alternatives for visitors whose pets may not be allowed at certain locations. Military working dogs and regular pets will be featured in it. The guide was selected to be part of an international collaborative, “Tails of the World.”

“We put our own little spin on it when we call it “Tails of the Alamo City,” explained Smelter. “A lot of people come to San Antonio. We’re Military City, USA. We want to be able to say: hey, if you’re going to bring your dog, here are some places you can go.”

Once they cover the cost of the book publication, all of the proceeds will be donated to nonprofits U.S. War Dog Association and Mal-FFunctions Rescue. The photographers say the organizations provide much-needed support to disqualiﬁed and retired military working dogs, contract working dogs, as well as their handlers.

“It’s really nice to be able to do something that gives back to them. They’ve done so much for us,” said Smelter.

The book should be finished by November. The photographers are still looking for dogs to be featured including a chihuahua. Deltuva says there are approximately 20 sessions left. If you would like to help their mission, a photo session is $95 and pre-sale books cost $50. For additional information, you can e-mail info@aresemzyphotography.com. Check out their work on Facebook or Instagram @tailsofthe_alamocity.

Deltuva says in addition to the guide, a series is being discussed. They want to feature surrounding cities in Texas and eventually, create a guide for various cities across America.