The home on the 200 block of Segura was declared a total loss after a blaze Sunday morning. 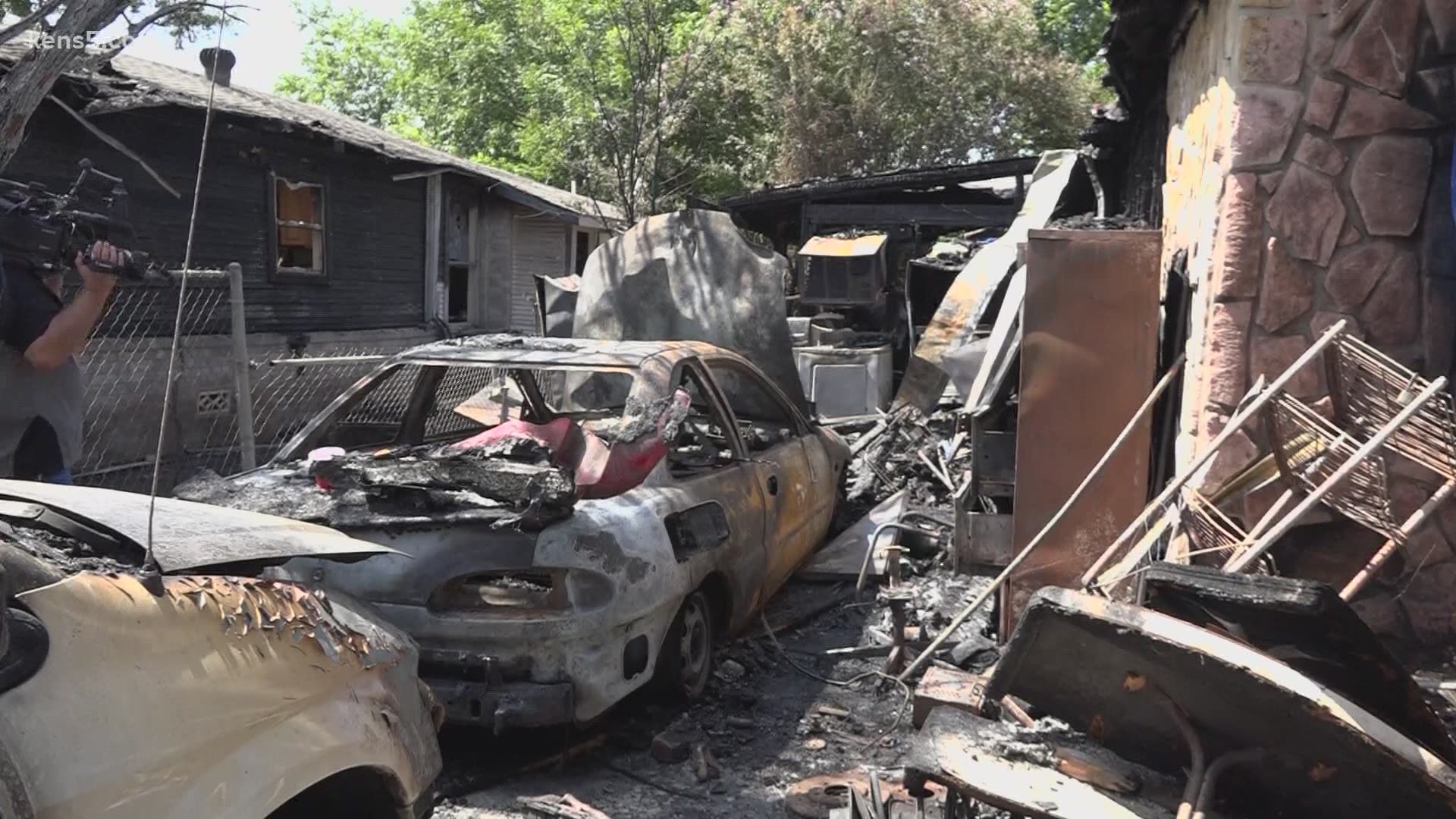 SAN ANTONIO — Choking back tears, Barry McKinnley says the loss of his pets in a devastating fire Sunday morning is the most difficult part of coping with the loss of his childhood home.

"We had them a long time and it hurts. It hurts," McKinnley said.

The fire, in the 200 block of Segura, near Enrique M. Barrera Parkway, raced through the modest home that McKinnley and his sister Angenette grew up in.

“We were trying to get to the animals but the flames were in our faces,” McKinnley said.

McKinnley said he had hoped firefighters, in protective suits, would be able to save the pets, but the fire was too fast.

“They didn’t have a chance because it went up too fast.  We tried to open the door but it was engulfed and the smoke just got to them,” McKinnley said.

Overcome with the memory, McKinnley said the cats were crying and trying to escape.

"You could hear them taking their last breaths in the back," he said of the painful moment.

In addition to the loss of his companions, McKinnley said he and his sister had no time to save any of their possessions.  He says medications, cell phones, computers and other electronics and two cars were all lost to the flames.

Wearing the only shoes he could salvage, McKinnley said “I digged into the debris to find these galoshes.”

Still wearing the soot-stained clothes he had on at the time, McKinnley said a family friend loaned them a vehicle for shelter, and that’s where he and his sister slept overnight, unable to find a nearby motel.

Fire officials have yet to establish a cause for the smoky fire, but McKinnley said he is grateful he and his sister were able to escape. "We have soot in our lungs but we're okay," McKinnley said.

McKinnley said the house next door was damaged as well when the fire jumped from his house, to his cars in the driveway and then to the neighbor’s house.

McKinnley said they have no insurance on the home they inherited from their parents, so he was relieved when volunteers from the American Red Cross delivered a stipend that will help with basic needs for a few days.

McKinnley and his sister also found comfort at a neighborhood pantry just a few blocks away.

Kym’s Kupboard at the Rogena Reed Center is in the 200 block of Purcell.  The facility, on Edgewood ISD grounds, offers many types of emergency aid to the needy from all sections of the city.

Pamela Allen, who established the service, said “It was so good that they came here!”

Allen said “They were able to come in and get what they needed. We were able to give them food, and they will come back for things that are specific to their needs.”

Thanks to generous donors, the Edgewood pantry is able to help anyone in trouble.

“We are a lifeline. We do see a lot of crisis here. There’s poverty, drugs, trafficking. But we don’t close our borders. We welcome everyone here,” Allen explained.

“We just see a lot of families in need and being able to offer them the basic necessities, such as food and milk for their children and underwear. I mean that is a necessity," Allen said.

Allen said she’s proud that the facility is a beacon.

“You can hear about the bad and you can walk away thinking what a dark, dismal time we’re in but I get to see the goodness of people driving up here delivering donations,” Allen said.

The brother and sister pair, who came to the pantry empty-handed, left with full hearts, fresh food, new shoes, and even new underwear.

Allen says the love and support of this west side community will continue as the family finds shelter and begins to rebuild. Allen says they will be able to come back to get more things they need.