As parents worry about social distancing, the quarantine policy and requirement for struggling students to return to campus, NBISD is offering insight. 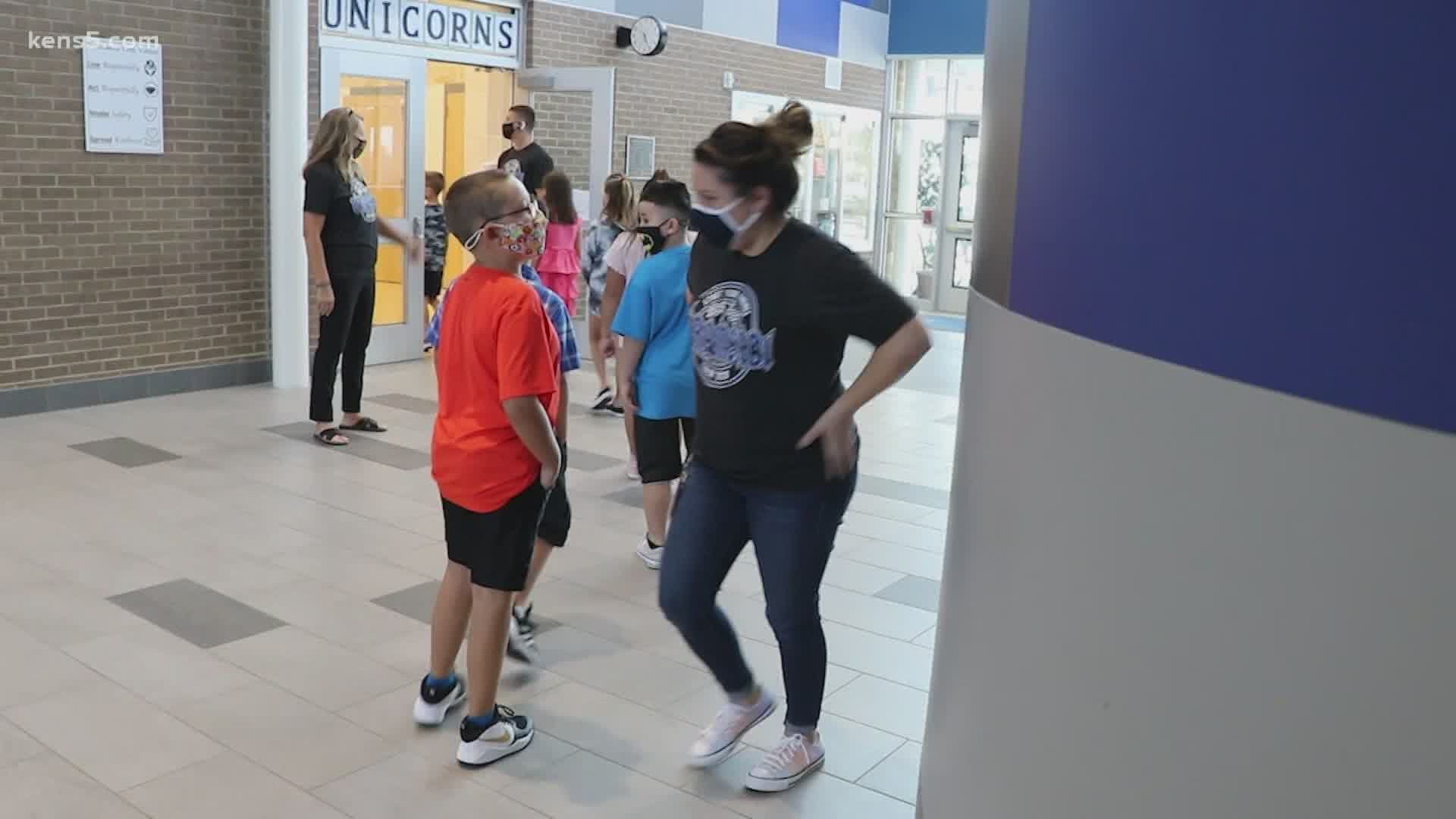 NEW BRAUNFELS, Texas — A New Braunfels ISD parent is raising concerns as the number of students on-campus is set to grow with the start of the next grading period.

The district is sharing what it's doing to avoid overcrowding at schools—overcrowding that one parent says she noticed on social media.

“When the school first came back, there was a live Instagram shot that I did see,” said Vanessa Vasquez, an NBISD parent. “It was a normal transition and the caption on it was: 'Six Feet. What?'”

She chose to have her eighth grade daughter learn from home this year. Clips on social media showing school hallways at two of the district's schools, she says, have reaffirmed that decision.

“We are a family that would be considered in this high-risk category,” Vasquez said.

On Friday, a New Braunfels ISD spokesperson shared video of New Braunfels High School hallways, explaining that one-way traffic and A-B block scheduling are being used to reduce congestion. A fourth lunch at NBHS and alternating table use is another way the school is trying to create extra time for cleaning the cafeteria.

The district expresses confidence in its measures.

“Our students have been very cooperative with following the guidelines that are in place,” the district's statement reads. “We have been very impressed with their resilience and ability to adapt. We want to also thank the parents for encouraging them to follow the procedures and for helping set an example for their kids.”

Vasquez has been paying close attention to what's happening in the district's schools. The reason: An NBISD policy is requiring her daughter to return to campus for the next grading period, due to academic issues in core classes.

“Performance is important, but I don't feel like it should cost our safety,” Vasquez said. “It's not something that we need to add additionally to our child to carry that burden to protect your family.”

She also pointed to Comal ISD’s approach of managing grade or attendance issues on an individual level instead of the return-to-campus mandate made by NBISD.

Vasquez says that, after asking the district to reconsider, her daughter was eventually allowed to remain a remote learner.

“I had to fight very hard and I don't know how many other parents were like me,” she said. “I don't know if they knew the good fight had to be fought.”

The data could change after NBISD gave parents another chance to update their choices between October 13-15th.

Most of the 1,408 students switching to in-person learning next week chose to do so voluntarily. The district spokesperson explained:

“Each child's academic record is being evaluated every three weeks to ensure they are successful and being given the right resources. The number of students that are coming back to campus next week includes a small percentage due to grades and/or attendance. Most of the students that we have been tracking have complied and are getting their work done and attending classes.

"So rather than than working out some of these social distancing issues, they've decided to redefine the (Centers for Disease Control) guidelines," said Vasquez.

The district says the new plan was put in place after examining how many students in quarantine had contracted the coronavirus. They pledge to frequently reevaluate the policy.

"This new protocol will be implemented during the next nine-week school period that begins on Monday, October 19, 2020, and reevaluated frequently with regards to community spread indicators and district COVID positive cases," said the district spokesperson. "All tracking and tracing of students will continue and notifications will go to all parents when a student is in 'close contact.'”

RELATED: 'Look at the facts': Parents dig into info as hundreds of NBISD students quarantine