Driver's attorney speaks out, disputes city claims in NBPD use of force case

Clarence Crawford, a Black man, was tased by a white New Braunfels police officer. His lawyer is sharing what he believes city officials left out of the story. 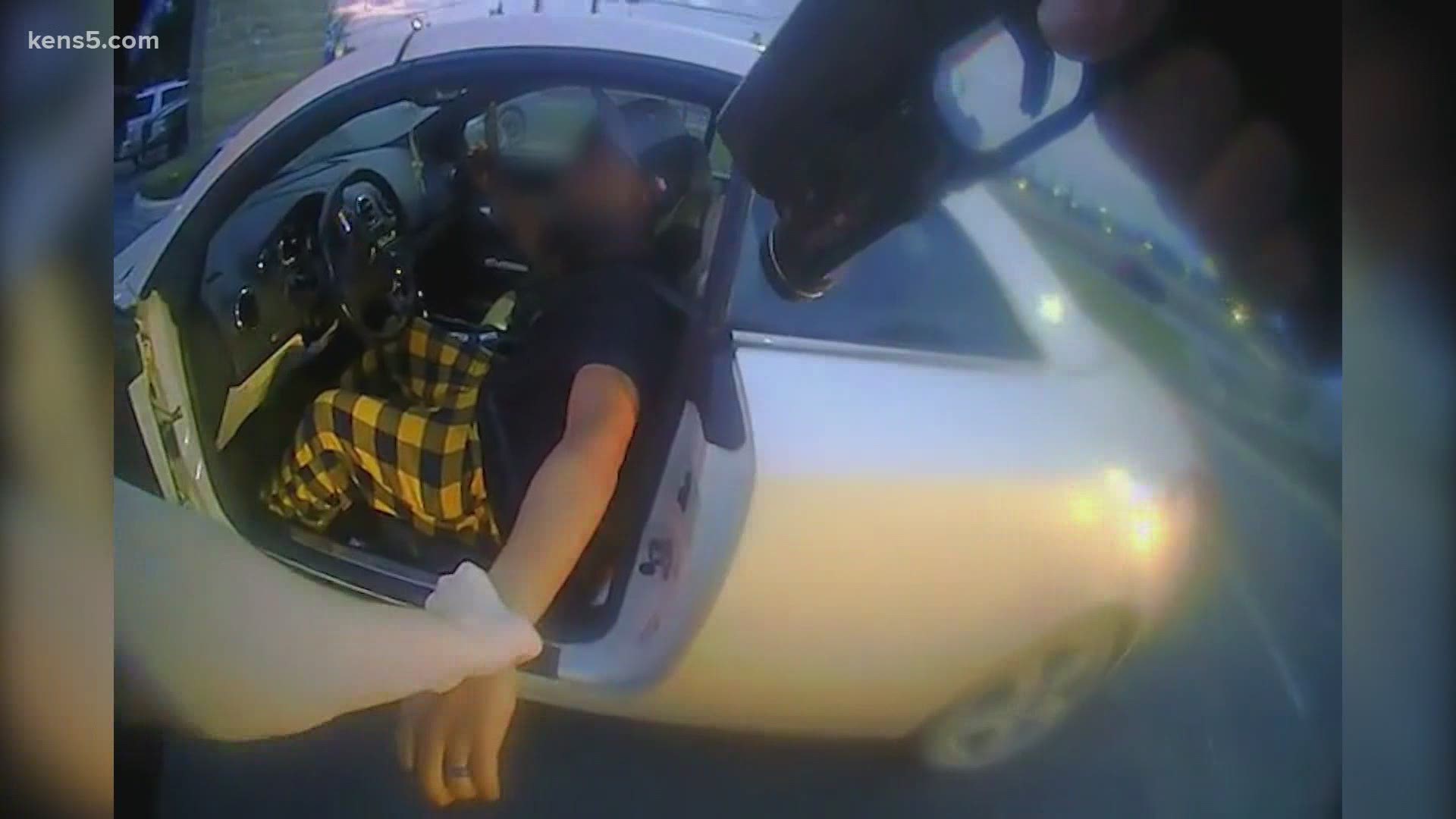 NEW BRAUNFELS, Texas — The Black man shown on body camera video being tased by a white New Braunfels police officer is sharing what he believes city officials left out of the story.

The footage was released Monday, showing what happened during a traffic stop for a dirty license plate on January 15, 2020. The driver's lawyer released the new details Wednesday.

The written statement said the traffic stop upended Clarence Crawford’s life. He lost his job afterward and is still unemployed. The lawyer also said some claims, made by the New Braunfels City Manager this week, are false.

Crawford filed a lawsuit against the city in June.

City officials said they didn’t publicize the incident sooner at his request. The Monday announcement was made after mediation didn’t resolve the suit.

But the lawyer’s statement said that is not true.

“Mr. Crawford requested the body and dash-cam video numerous times since January 2020. The New Braunfels Police Department stalled for nine months before releasing an edited version of the body-cam video to Mr. Crawford and has never provided the dash-cam video to him,” said Paul Vick in a statement on behalf of his client, Crawford.

“The claim by Mr. Camareno that the NBPD waited to publish the video at Mr. Crawford’s request is false.  In fact, Mr. Crawford was not asked if the video of him being assaulted by Officer Meyer could be shared with the public nor distributed on a flash drive.”

The statement also alleges Officer Kaleb Meyer pulled up next to Crawford, saw him through the car window and then followed him for some time before turning on his lights and sirens.

In the release, Crawford mentions the female officer who arrived at the scene second and thanks her for deescalating the situation.

“Mr. Crawford may not be here today if not for her,” the statement continued.

The City of New Braunfels says Officer Meyer was never investigated for misconduct but retrained over the summer.

Kaleb Meyer resigned from the force in September.

“We're also working with an independent outside firm to review policies and standard operating procedures and also review our training and processes to build an even stronger department,” said City Manager Robert Camareno on Monday.

Charges against Crawford were dropped seven weeks ago.

The city manager said former Police Chief Tom Wibert took some responsibility and this incident was part of why he retired in October.

An interim chief was sworn in on October 12.

Keith Lane formerly served as police chief then city manager in Haltom City, near Fort Worth. 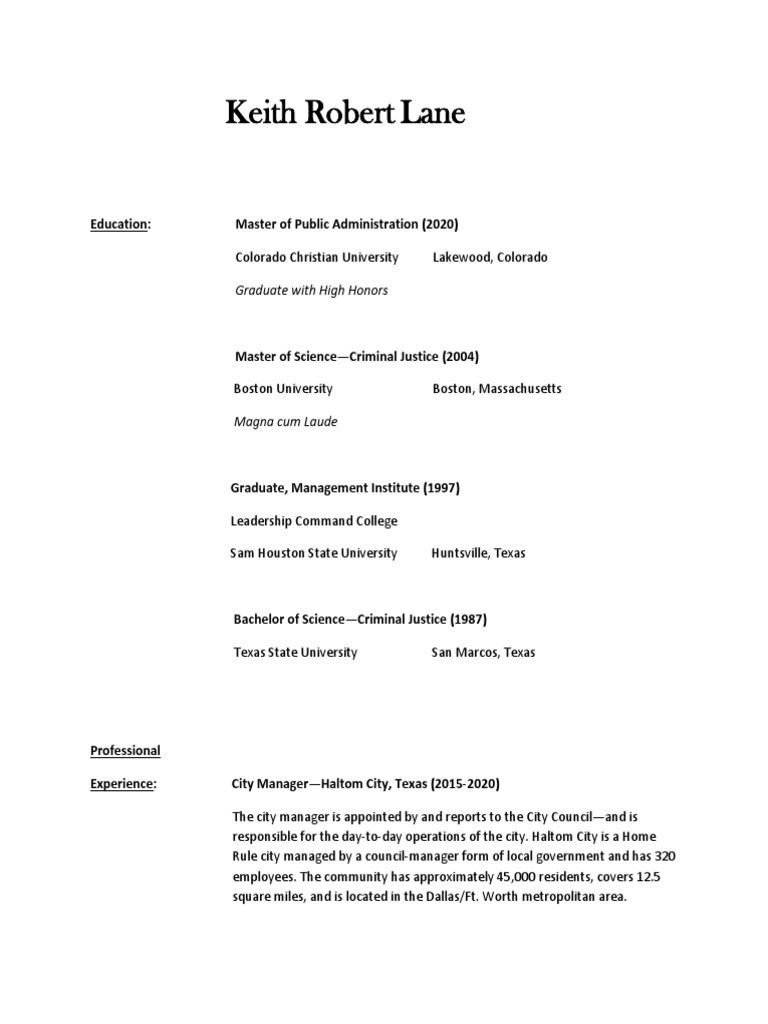 Resume for interim New Braunfels police chief | Texas | Police
Professional responsible for the day-to-day operations of the city. Haltom City is a Home Rule city managed by a council-manager form of local government and has 320 employees. The community has approximately 45,000 residents, covers 12.5 square miles, and is located in the Dallas/Ft. Worth metropolitan area.

The city is finalizing their job posting and will begin to accept applications for a permanent police chief soon.

KENS 5 reached out to the city for comment on the facts Crawford’s lawyer disputes in his statement.

A spokesperson for the City of New Braunfels replied:

“We respect Mr. Crawford and appreciate his comments on our honest, hard-working law enforcement officers. The City stands by our previous statements.”

Statement on behalf of Clarence Crawford by his attorney, Paul Vick regarding the release by the New Braunfels Police Department of body and dash-cam video from January 15, 2020

First, Mr. Crawford extends his heartfelt appreciation to the female officer who deescalated the situation on January 15, 2020 involving NBPD Officer Kaleb Myer; Mr. Crawford may not be here today if not for her.

The overwhelming majority of law enforcement officers are honest, hard-working public servants.  However, as in any profession, there are police officers who do not live up to and meet the objective standards of their peers.  We believe Officer Myer falls into this category.

Mr. Crawford was simply driving home from work when Officer Myer pulled up beside Mr. Crawford and directly observed him.  Mr. Crawford’s vehicle did not have tinted windows and his race was easily recognizable. Officer Myer then followed him for a period before turning on his lights and siren allegedly because Mr. Crawford had a dirty license plate.  Strikingly, Officer Myer, while claiming that he could not read the license plate, called the plate number into dispatch while following Mr. Crawford at dusk on IH-35 at approximately 60 mph during New Braunfels rush hour traffic.  Mr. Crawford pulled into the closest safe and well-lit area.  The events that followed, as captured by Officer Myer’s body-cam video, are extremely disturbing and in the words of the city manager “unacceptable.”

Even more troubling, Officer Myer continued to serve as a police officer in the New Braunfels community during the nine-month period following these events. No investigation was conducted by NBPD or the Department’s Professional Standards Unit regarding the incident.

New Braunfels City Manager Robert Camareno misled the public in the recent news conference by claiming to project transparency and describing this as an isolated incident. The following events contradict his statements:

As reportedly stated by the council member at a municipal meeting, “the purpose of the meeting was to be proactive and minimize or eliminate any kind of situation like was going on in Ferguson, Missouri,” and “we should address this at a local level before it explodes;” and  “we have all the same ingredients brewing here as in Ferguson.”

• Officer Myer was reportedly allowed to resign from the NBPD in September 2020 (nine months after the incident involving Mr. Crawford) with no internal investigation of his conduct.   This reckless conduct by the NBPD opens the door for other jurisdictions to hire Myer without knowledge of his history of dangerous and reckless conduct on the job.

• Mr. Crawford requested the body and dash-cam video numerous times since January 2020.  The New Braunfels Police Department stalled for nine months before releasing an edited version of the body-cam video to Mr. Crawford and has never provided the dash-cam video to him.  The claim by Mr. Camareno that the NBPD waited to publish the video at Mr. Crawford’s request is false.  In fact, Mr. Crawford was not asked if the video of him being assaulted by Officer Meyer could be shared with the public nor distributed on a flash drive.

Mr. Crawford, a long-time New Braunfels resident, was simply driving home from work when his life was upended by the dangerous and unwarranted actions of Officer Myer. Mr. Crawford lost his job shortly after the incident and continues to be unemployed.  Although the criminal charges against him were dropped nine months after the arrest, the arrest still appears on a public records search.

Despite all of this, Mr. Crawford continues to strive to be part of the solution.  Unfortunately, leaders in the New Braunfels city government have yet to give him that opportunity.

The citizens of New Braunfels deserve transparency. The neglect shown over the past five years by NBPD and city officials concerning similar matters threatens to tarnish the incredible image of New Braunfels, both locally and statewide.  The citizens and businesses of the community deserve much better from their city leaders.