SAN ANTONIO — A heated exchange over campaign signs was caught on video this week.

Nathan Buchanan, who is running for Bexar County constable in Precinct 3, said he and his wife were placing one of his campaign signs off San Pedro Avenue near Highway 281 Monday night when a woman pulled up onto the curb and tried to snatch it.

“I noticed a lady stepping out of the car, ripping my sign out of the ground,” Buchanan said.

He said they approached the woman, and she started cursing at him.

“She said that parkway belongs to her. I told her, ‘No, it belongs to the city or the state,’” Buchanan said.

He said the woman then threw the sign at him, assaulting him.

What happens next is caught on video that Buchanan posted on his campaign Facebook page. (Warning: The video contains explicit language.)

Buchanan’s wife can be heard accusing the woman of stealing the sign, with the woman responding, "It's not stealing."

Buchanan’s wife is then heard saying, “It is, Patty, it’s against the law to touch people’s political signs.”

Shortly after the exchange, the SUV drove off the curb and left the scene.

But the woman accused of stealing the signs had a different story.

“We are adamant about keeping our parkway very beautiful,” Gibbons said.

Gibbons said she was driving home from a meeting and saw the sign, and decided to remove it.

“I just saw the sign, and the mama bear came out of me. It’s like, 'We just cleaned that area up, and I’m not going to let it get trashed again,'" she said.

She denied that she assaulted Buchanan, and said he was the one being confrontational.

“I didn't even know who he was. He never introduced himself. He used a lot of F-bombs,” Gibbons said. “It felt like I was in was a very hostile situation he created, so I just wanted to get in my car and leave.”

Gibbons said the sign shouldn’t have been there in the first place.

“Both state and city code declare those right-of-ways as illegal places to put a sign, and city code will even go to say that that's considered a bandit sign when they're put in the right-of-way, and that citizens have the right to pull those signs up or remove them,” Gibbons alleged.

KENS 5 reached out to the city’s code ordinance department, who said the political signs can be placed in a city right-of-way and remain there until 90 days after the election.

City officials also said the right-of-way off San Pedro Avenue in question is a city right-of-way.

They sent us this document, dated February 2014, with information which they said is still in effect today: 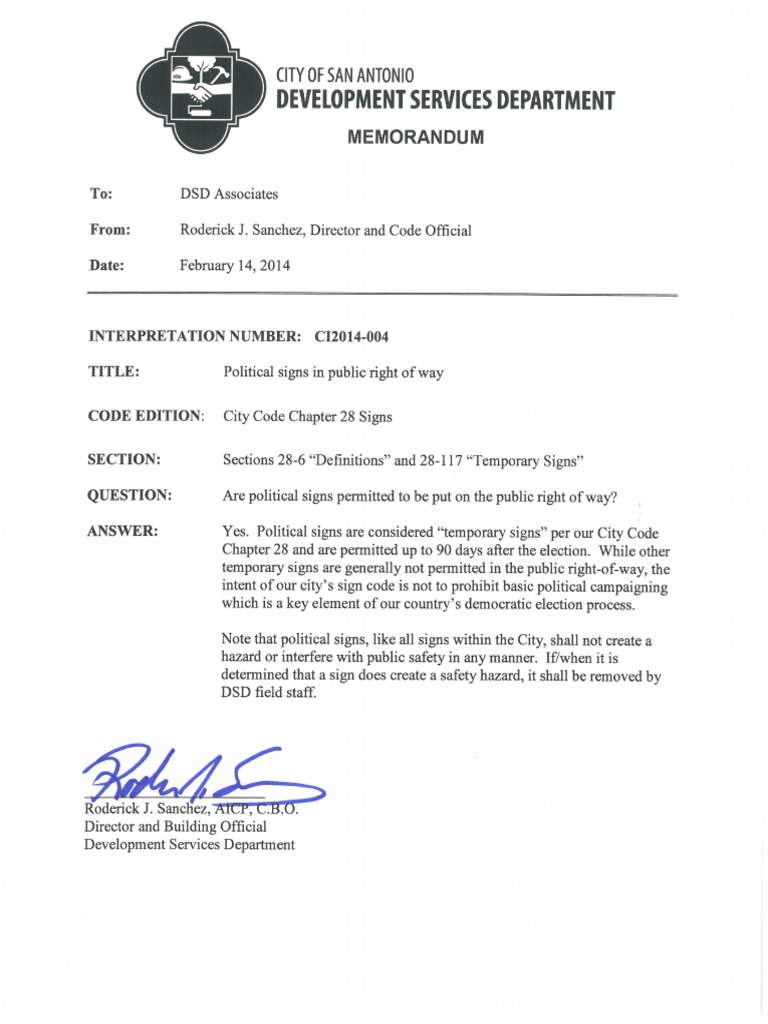 Since this story aired, city officials have informed KENS 5 that the policy previously sent is outdated.  The current policy is posted by the Chief Sign Inspector.

The "Tips for Installing Political Signage" indicates that political signs are exempt from requiring a permit or being in violation if they meet the following guidelines:

Gibbons said she was just protecting the green space in her neighborhood.

“It's political season. There are a lot of them around town. They start to become clutter and litter and really tear down the beautification of our side of our neighborhood and we're here to make sure that people love living here, feel good living here and it's a beautiful place,” she said.

Buchanan said he later filed a police report against Gibbons for assault.

“This could have been handled in a totally different way,” he said.

He said he’s had signs stolen in the past few weeks, and doesn’t want to lose anymore.

“She could have called me, sent me a text, ‘Hey, come get your sign. We don't allow signs here,’” Buchanan said. “I mean, I would've done it. I've gotten a lot of signs taken. I don't want my signs taken anymore; they cost money.”