SAPD Officer Steve Casanova was wearing a body camera the day his gunfire killed an unarmed African American 18-year-old man. A copy of the footage was sent to KENS. 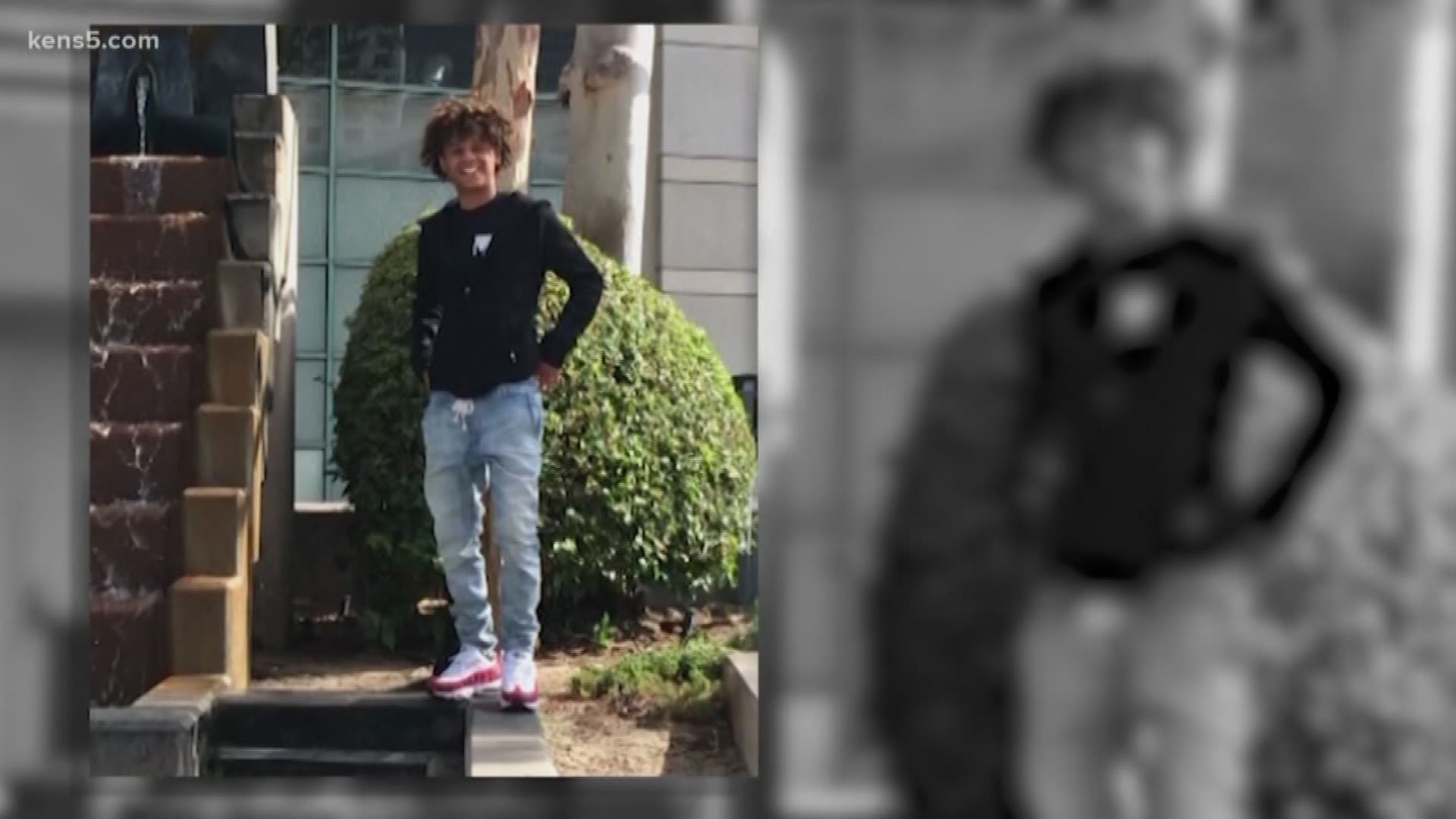 217 Roberts St. was not the house on the block with a perfect reputation, instead receiving regular visits from the San Antonio Police Department.

On the morning of October 17, 2018, yet another visit from police snowballed into an officer-involved shooting that killed Charles "Chop" Roundtree Jr.

McManus said Casanova then fired his service weapon, striking Snowden in the backside. The chief said the gunfire exited Snowden's buttocks hitting Roundtree in the chest.

The unarmed 18-year-old was killed.

"It's a very unfortunate tragic incident that happened," McManus said after the shooting.

According to the chief, the city was trying to shut down the residence for good. But the owner of the home chose to fight the city’s effort in court. The issue remained unresolved the morning of the shooting.

In a two-year span from the date of the officer-involved shooting, SAPD calls for service to 217 Roberts Street revealed 130 visits by police; 64 visits for drugs and six for gun-related incidents.

During that same time, police made 111 calls to the entire rest of the block.

None of the calls were fatal at 217 Roberts Street until that October morning, when Casanova's gunfire killed an unarmed teen with no criminal record.

Eyewitness News has been working for months to get a copy of Casanova's body camera video. SAPD denied the requests, citing the officer had not been cleared criminally, as well as the ongoing case investigation.

Casanova was placed on administrative duty following the shooting. That's procedure in all SAPD officer-involved shootings until the officer is cleared of all criminal legal hurdles preventing him from being back on the street.

SAPD also refused to let KENS 5 News see the officer's personnel files because he had not been disciplined and the investigation was ongoing. Additionally, department officials said they could not comment on the case because they are being sued by Roundtree's family.

However, a source wishing to remain anonymous sent a copy of the officer's body camera video with a note that said, "You should see this."  The police department said it could not authenticate any video connected to the case under investigation.

KENS 5 was able to authenticate the nearly 90-minute-long video with Snowden's criminal attorney, Alex Washington. He had no comment beyond its verification.

The footage begins with Casanova sitting in his police cruiser, talking to Maria Herrera. Initially, there is no audio until the policeman gets out of his vehicle to investigate assault allegations.

The Central patrol officer walks over to a vehicle. Herrera opens the door. Her husband, Esteban Preciado, is sitting in the front seat with a busted lip.

The couple had their infant in the back seat of the car. Herrera said she was delivering soup to a Facebook client even though it was after 1 in the morning.

Casanova and a second officer were reportedly watching 217 Roberts St. The couple was parked across the street from the house when the attack happened.

Herrera: He just popped him in the face three times.
Casanova: And that’s all he said?
Herrera: Look. I wanna press charges.
Casanova: What…What…Hold on. Give me a sec. What was he wearing?
Herrera: He was wearing a grey sweater, blue jeans. He was black.

On the video, another police officer approaches Herrera and Casanova. He is brought up to speed on the couple’s complaint.

Casanova: She had got down across the street. She was dropping menudo.
Herrera: I’m selling Caldo de pollo. And uh..
Casanova: And, uh, this girl I saw…(Casanova interrupts Herrera.) Hold up. Hang on. This is the girl that I saw that was across the street. The girl in the pink was at the dope house. Dude from there came out and f***ing went up to them and was f***ing talking s**t saying, 'Don’t be f***ing on my block' and f***ing punched him in the face.
Officer: Alright.
Casanova: Cause they were parked there? So, it looks like we need to go check the house.

Herrera tells the officers the attacker was tall, skinny and had no hair. Casanova said officers would look for the attacker before returning to his vehicle to wait for backup to arrive.

Casanova: What are the odds of that s**t (laughs)?

During that time, the audio on Casanova’s body camera is muted as he talks with another officer. He turns the audio back on when additional officers arrive.

Casanova: This black dude f***ing comes out and was like, 'Don’t be f***ing parking in front of my aunt’s house.'
Officer: What did she say he looks like?
Casanova: She said he had like short hair. Said he looked between 20 to 25. And he was real skinny. And said he was wearing like a grey hoodie.

According to the body camera, three officers got in position down the street from 217 Roberts in case any potential suspect ran.

Casanova: What’s up, man? (Walks up to the house. Opens gate as he speaks to a man eating on the porch.) You live here?
Man: No, sir.
Casanova: You don’t? Who’s staying here right now?
Man: I don’t know.
Casanova: You don’t know. Remove your hat for me. (Shines police light on the man. The man pulls his hat up.) I recognize you.

Casanova walks on the porch and pulls on a locked screen door to the side of him. Two knocks can be heard on his body camera video. A nudge from the officer opens the front door, behind the screen door.

Snowden: What’s up?
Casanova: What’s up, man?
Snowden: Hey who the f*** is this? (Snowden rises from a couch with one hand in his pants.)
Casanova: Hey lemme see your f***ing hands! (Fires gun twice) F***! Shots fired! (Runs toward the street.) Oh s**t! Watch out! Move out my way!
Dispatcher: 2330, you said shots fired?
Casanova: F***! Get back!
Officer: Back! Back! Back! (Emergency tone goes off. Dogs are barking and coming toward police.)
Casanova: Get that f***ing dog outta here!
Officer: What did you see?! What did you see?!
Casanova: Hey, he had a f***ing gun and pulled it out (Emergency tone sounds off).

Casanova is never seen entering the home in the video; he shot from outside the front screen door.

Officers rushed to the scene when they head the distress call. In the middle of the chaos, Casanova and the other officers allow the man who was eating on the porch to crawl out of the yard.

The body cam video shows a pit bull following him out of the yard. The dog has a confrontation with police.

Officer: Back off! Watch out!

An officer shot and killed the dog. As police move tactically to set up a perimeter, a woman screams out of 217 Roberts at officers.

Woman: Hey! What’s going?!
Casanova: Hey…stay in the f***ing house!
Officer: Stay inside!
Officer 2: Get in your house and you won’t get shot!

Casanova runs across the roadway to other officers. He reaches for more gunpower.

Officer: Come out of the house, guys! We’re not leaving until you come out!

Police get their first indication someone is wounded inside of the house, and they tighten their grip on the scene. They demand the occupants in 217 Roberts to come out with their hands up.

One by one, the occupants emerge with their hands in the air, forced to show they had no weapons and walking backwards into SAPD custody.

Snowden was shot in the backside. He was taken to University Hospital. Roundtree died inside of the home.

'Nothing...that would justify a use of deadly force'

Ramey is a St. Mary’s Law School professor who was formerly a Dallas-based attorney. He also served as legal advisor for the Irving Police Department. He is an expert in criminal law, criminal law procedure, police searches, seizures and use-of-force.

“There’s nothing at the point of the shooting that would justify a use of deadly force in order to make an arrest,” Ramey said.

Saidler has 45 years of law enforcement experience, having worked at SAPD, where he was a robbery and homicide detective and SWAT member.

He also worked as a capital crimes investigator at the Bexar County District Attorney’s Office, where he also looked into officer-involved shootings.

Before retiring, Saidler served as the deputy chief of criminal investigations. Officer-involved shooting investigations were investigated under his eye.

“I’m not aware of anything right off the top of my head that I see that just stands out to me and goes, 'Yeah, that’s not the way you should have handled that,'” Saidler said.

Both said Casanova did not expect the shooting, judging by how he approached the home.

“He didn’t have much time to make that decision. He fires and I think where you can come up with he’s firing for his safety...he fires and back away,” Saidler said. “He doesn’t stay at the door. He doesn’t continue to go in and take hold of the person. He ‘s afraid and backs up.”

Ramey said it’s unclear if Snowden has a gun in the video. He doesn’t believe the people inside of 217 Roberts St. knew Casanova was an officer because he never identified himself.

“He certainly needs to identify himself quickly because he’s wearing a dark uniform. This is in the middle of the night,” Ramey said. “So it’s not going to be clear to anyone who is on the porch.”

Saidler said he believes what he saw is a self-defense shooting by the officer. But he’d like to review more information on the case, such as witness statements, adding the video is not enough to make a firm decision.

Snowden was charged with felon in possession of weapon. Police have not held anyone criminally responsible for Roundtree’s death.

SAPD’s review was turned over to the DA’s office. It’s unclear where the case stands but Christine Del Prado, chief of Special Crimes for District Attorney Joe Gonzales, released the following statement:

“The officer shooting is under review, so we cannot make any further comment at this time."

Ramey said the DA’s Office has a lot of power and persuasion in such cases, including the ability to present the shooting to a grand jury for an indictment. He said most grand jurors are sympathetic to police.

According to court filings, Casanova continues to work at SAPD. His attorney did not respond to a request for comment.