Community members who live in the area say their discomfort about the zoning proposal stretches back generations. 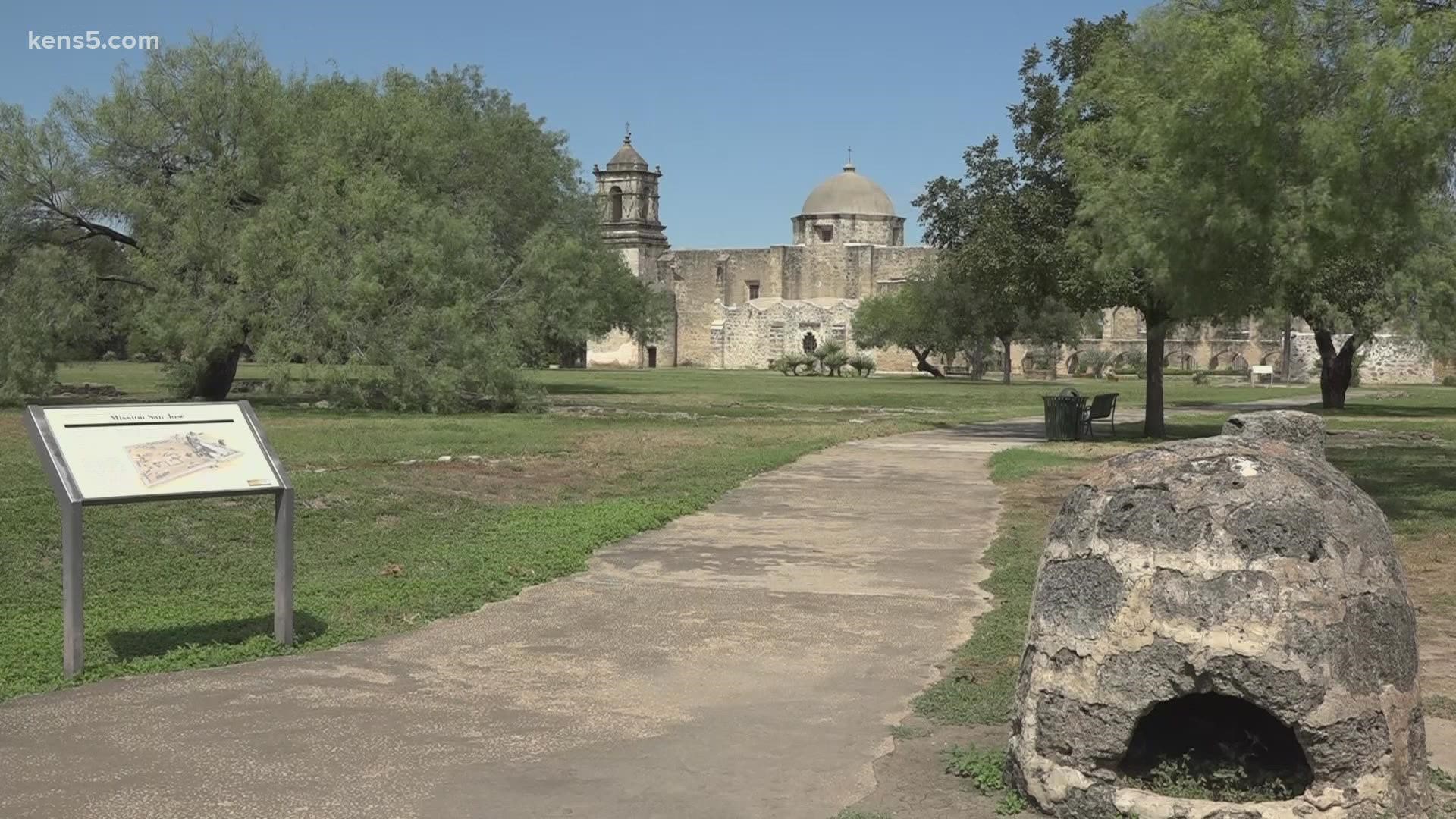 SAN ANTONIO — Some people who live near Mission San Jose on San Antonio’s south side are doing everything they can to protect the World Heritage-designated site from encroaching development.

There's an online protest petition drive underway now, and upset neighbors say they will take to the streets this weekend for an in-person picket event.
Explaining the background on the proposal, neighborhood advocate Terry Ybanez came armed with a measuring device to illustrate the 1,000-foot protection zone at Mission San Jose.

Ybanez said the area has viewshed protection, a sacred space surrounding the World Heritage site with rules about how the land can be developed.

Ybanez said when neighbors learned of a proposal by developer James Lifshutz to change the zoning on a parcel just 500 feet from the mission in order to add 46 apartments, they sprang into action to stop the project.

It’s a feeling of discontent that stretches back generations, as Ybanez said indigenous families were forced to sell their land and move when the mission became part of the national park system.

“The families were told, ‘You're moving. We're buying your property. You have until this time to get off the land.' So there are some deep-seated pieces of anger and resentment because of that, for all those families,” Ybanez said.

Adding a high-density apartment development in an already crowded neighborhood is not a good plan for the buffer zone, according to Ybanez.

“When the city signed the designation in 2015, along with the World Heritage committee, they made a promise to UNESCO to protect the World Heritage site and the people who live around the missions, and that is not happening,” Ybanez said.

Summarizing key concerns of area residents, Ybanez said, “this neighborhood already has four low-income apartments in close proximity to Mission San Jose and the density that the apartments bring near the mission hinders the openness of the mission, the greenspaces that are already here.”

Ybanez said they also have economic concerns, as the project would be done as part of a Tax Increment Reinvestment Zone or TIRZ.

“We don't get any benefits from a TIRZ. Taxes do not come to our community. They do not go to our schools, Harlandale school district, or our hospital system,” Ybanez said.

Ybanez says they would welcome community-focused development that respects open space and would bring new business and tax revenue to the area.
“As it is, it's a free ride for the developer and the investor, and they are the only ones who benefit. The neighborhood does not,” Ybanez said.

KENS 5 reached out to the Lifshutz development office for comment and did not get a return phone call, but the neighbors said the group’s attorney did reach out to the group and offer to pull the proposed zoning change.

The parcel, located at 129 Huizar, is currently zoned C-2, which is a commercial designation. The proposal by the developer was to change the zoning to MF33 for a multi-family residential complex.

The District 3 City Council office confirms the zoning case has been postponed. Representative Phyllis Viagran said she hopes everyone involved will work together on a compromise.

While saying the neighbors would welcome appropriate, respectful changes, Ybanez said, “it is urgent that we protect the missions with a very great long-term vision of doing the right development.”

The parties are supposed to meet Friday, but full of distrust, Ybanez said the protest and the petition drive will continue.

Viagran provided the following statement about the controversy:

"To better understand and respect both positions, I am willing to bring all stakeholders together composed of the neighborhood association that falls within the Zoning boundary, community leaders, and applicant to conduct a series of public meetings that would allow more dialogue between the parties, discuss plans, and garner support ahead of applying to bring this to Council.

"The Council office will also be working with City Planning and Zoning staff, along with the Office of Historic Preservation and the World Heritage Office to make sure any project that falls within the Mission Protection Overlay District and Mission Historic District will align with the numerous zoning overlays in conjunction with the UDC amendment process that is underway.

"The renters vs homeowners dialog has to stop; renters are just as important as our homeowners. Everyone needs housing and with the current housing shortage, we are taking into everyone's needs into consideration."