A 4-month-old Gaston County girl suffered an injury in recent weeks. Her parents believe their babysitter is to blame. They filmed her with a hidden camera. 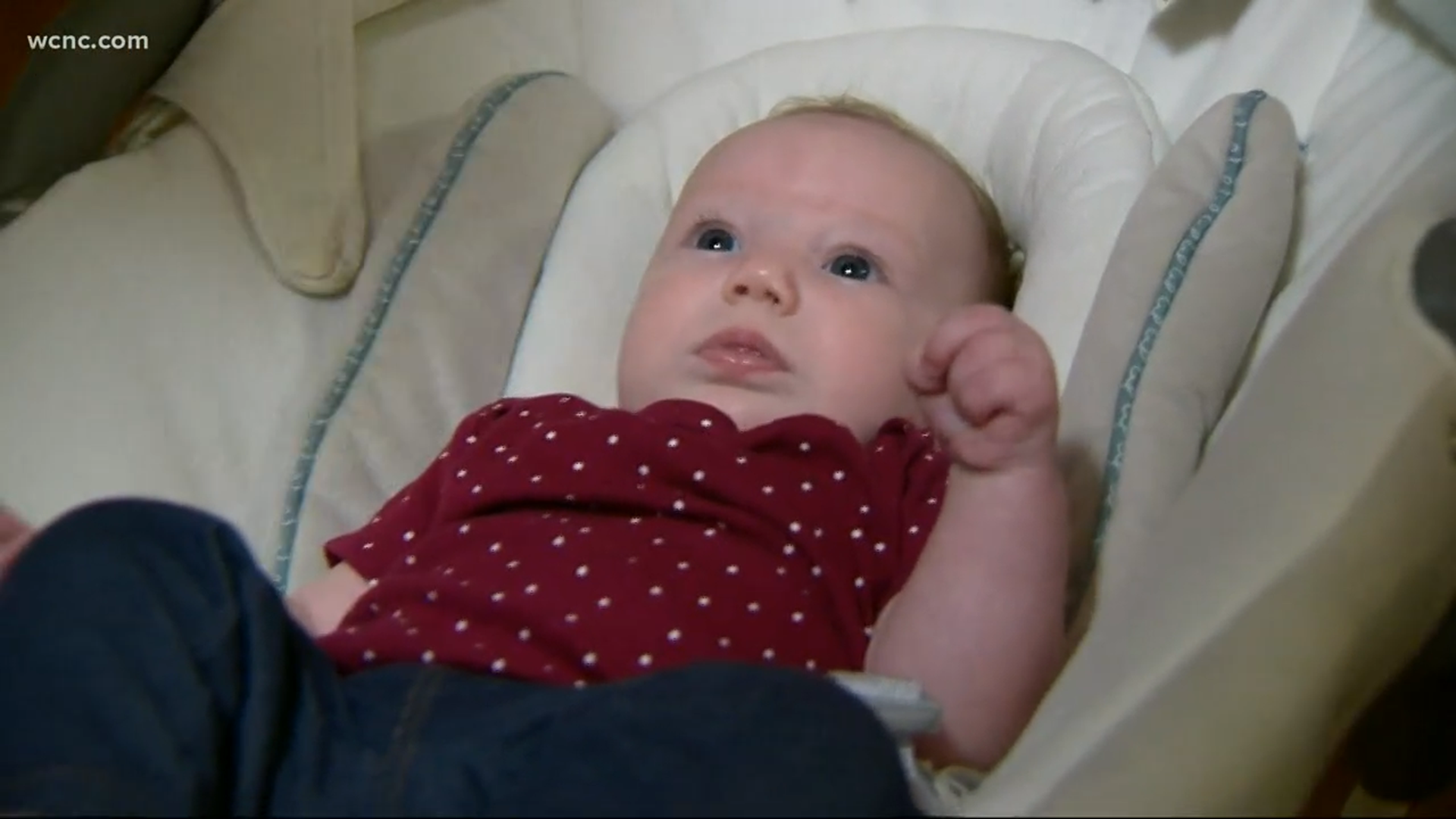 CHARLOTTE, N.C. — Editor's Note: This story contains images that some may find graphic or disturbing.

A hidden camera caught a Gaston County babysitter crossing the line with a Cherryville infant, according to the girl's family.

Lucas Armstrong and Brittani Ledford said they filmed the video last week after noticing a change in their kid's behavior.

"Emotionally, I was completely torn down by how she treated my daughter," Armstrong said.

The video shows a woman using tough language with the little girl, calling her "a brat" and "overdramatic," and telling her to "shut up." Gracelyn's parents also question the way she handled the baby. She's seen lifting up the infant by her hands.

"She like, yanked her up and her head flung like really far back," Ledford said. "I was mad at myself because I felt like I let it happen. I should've seen the signs."

Despite initially declining to take a police report, the Gaston County Police Department is now investigating the actions of the sitter. Capt. Brent Roberts said an officer followed up with the parents of Gracelyn Armstrong Thursday morning and said the agency now plans on reviewing the family's full video, investigating their concerns and turning the case over to the district attorney for a decision on whether charges should be filed.

While Capt. Roberts doesn't believe the original officer made a mistake in this case, he said any time someone disagrees with an officer's decision, they should call a supervisor.

"We are not perfect, we are always learning and always trying to get better," Capt. Roberts said.

The babysitter told NBC Charlotte in a text message that she's "making legal arrangements due to feeling threatened and defamation of character."

A doctor diagnosed Gracelyn with non-accidental trauma this week, according to medical records.

"They did a CAT scan on her brain," Armstrong said. "The doctor couldn't say when it happened. She would say it was older than three weeks."

They said their babysitter started watching their 4-month-old and 5-year-old a couple of months ago. Since she's not charged with a crime, we've blurred her face and are withholding her name, but Gracelyn's parents think she should be charged.

Gracelyn's parents said law enforcement disagreed. The family said they called the Gaston County Police Department last week, an officer came and watched the video, but with the help of a magistrate, decided there was no crime, so he didn't take a report.

After visiting the doctor this week, the parents decided everybody needed to see the video. They shared it on Facebook so others could be warned.

With a medical diagnosis now in hand, the parents plan on calling police again. In the meantime, they feel duped.

"She was phenomenal in-person," Ledford said.

"As soon as we turned our backs, it was a disaster," Armstrong said. "It was a nightmare."

We reached out to the Gaston County Police Department. A spokesperson told us the agency wouldn't be able to release any details until later this week.

'The last thing my camera & I saw before being tackled': UGA photo intern shares 'the' shot