UIL state tournament started Thursday morning at the Alamodome and ends with the Class 6A title game Saturday night. 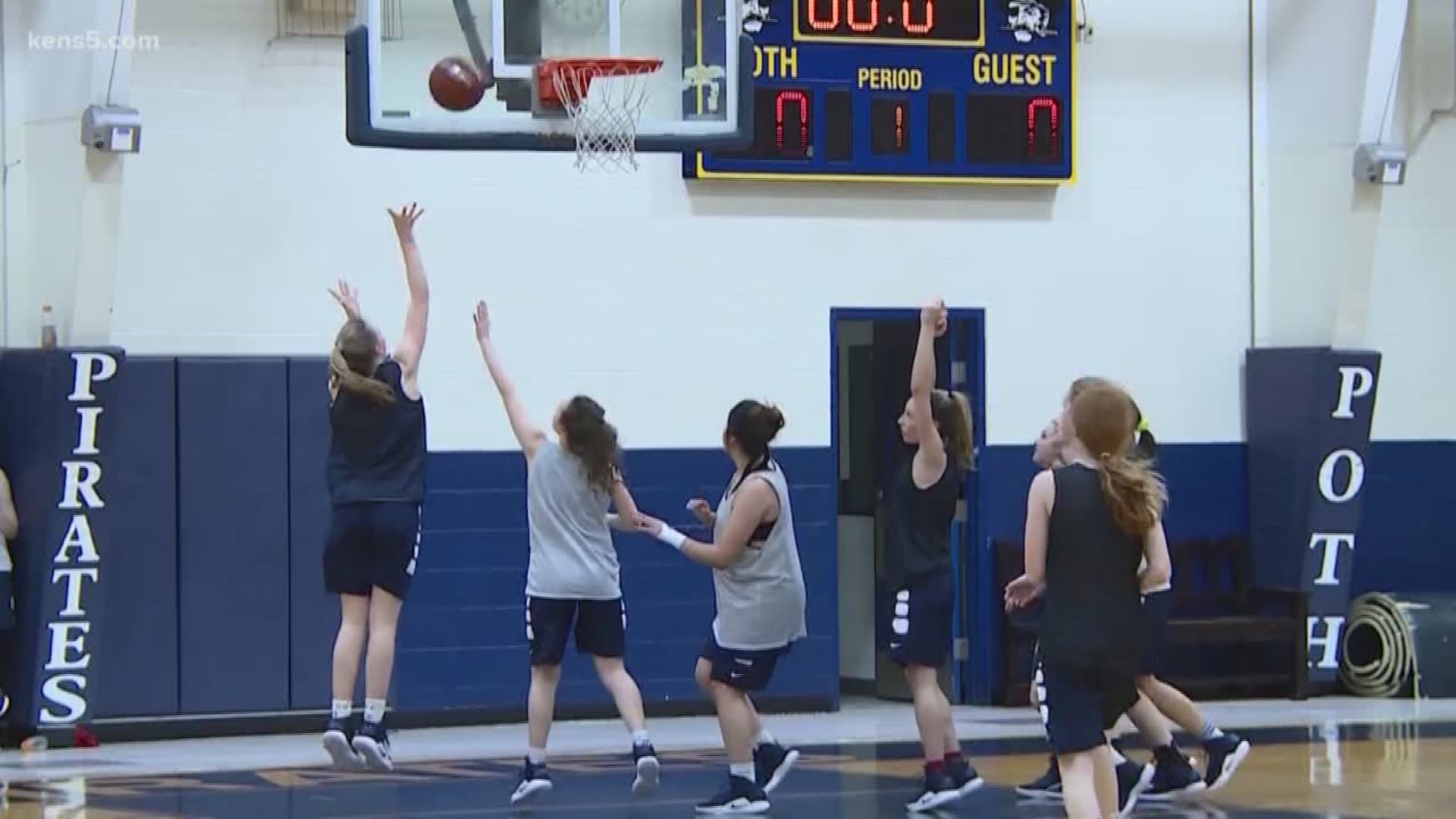 (Pairings for the other 6A, 5A, and 3A semifinals are at bottom of the story.)

SAN ANTONIO – If you’re looking for someone in Poth on Thursday afternoon and can’t find them, take a drive north to San Antonio and drop by the Alamodome.

Chances are good you’ll find practically every citizen of the town in the stands cheering on the Poth High School Pirettes in the Class 3A girls basketball state semifinals.

Poth beat Skidmore-Tynan 54-32 in the Region IV-3A final on Saturday to advance to the UIL state tournament for the 14th time in school history. The appearance in the tournament will be the first since 2013 for the Pirettes, who won state in 1997 and 2007.

Poth (29-5) plays Woodville (38-1) in the 3A semifinals at 3 p.m. Thursday at the Alamodome, where the UIL girls and boys state tournaments have been played since 2015. The girls' tournament started Thursday morning and ends with the Class 6A championship game Saturday night. The boys' tournament is scheduled for March 7-9.

With the Pirettes playing an afternoon game, the Poth ISD canceled Thursday classes to accommodate students. This season’s team has tapped into Poth’s rich girls' basketball tradition and rekindled memories of the Pirettes’ championship runs.

“We’re overwhelmed. I’m overwhelmed,” Poth coach Amanda Hemby told KENS 5’s Evan Closky this week. “I know the girls are super excited. Our community is super excited to have them back (in the state tournament).”

Banners honoring the Pirettes’ past state-tournament teams adorn the walls of the school gym, where the community gathers to support its team throughout the season.

Poth is one of three San Antonio-area teams playing in the girls' state tournament. Kerrville Tivy meets Frisco Liberty in the 5A semifinals at 7 p.m. Thursday, and Judson takes on Allen in the 6A semis Friday at 7 p.m.

Tivy (37-1) advanced to the state tournament for the second year in a row with a 44-34 win over Veterans Memorial, which made the 4A semifinals last year in its first varsity season. Mansfield Timberview defeated Tivy 62-43 in last year’s 5A semifinals.

The Antlers are led by senior Charli Becker and junior Audrey Robertson, who average 16.9 and 11.2 points, respectively.

Judson made history with its 71-44 rout of Clark in the Region IV-6A final, becoming the first area team in the UIL’s largest classification to reach the state tournament three consecutive years. The Rockets advanced to the state final for the first time last season and made their first state-tournament appearance in 2017. Plano beat Judson 62-58 in last year’s 6A final.

“We’re definitely ready,” Rockets coach Triva Corrales said Thursday morning. “We have one more touch-up tonight but, honestly, we work until it’s time to tip off. We take full advantage of every minute we can get.”

No San Antonio-area team has ever won a state championship in the University Interscholastic League's largest classification.

Allen (33-6) is led by point guard Nyah Green, who signed with Louisville in November. Green, who committed to the Cardinals when she was in the eighth grade, had been recruited by schools across the country since she was a six-grader.

Judson will have a pep rally in the school gym Thursday at 3:45. The Rockets will have a shootaround at the Alamodome on Friday from 11:30 to noon before returning to campus.

Other Class 6A, 5A and 3A State Semifinals