Record-low housing inventory in Austin and Round Rock has families looking out in the suburbs and beyond, buying up land in the Hill Country at a record pace. 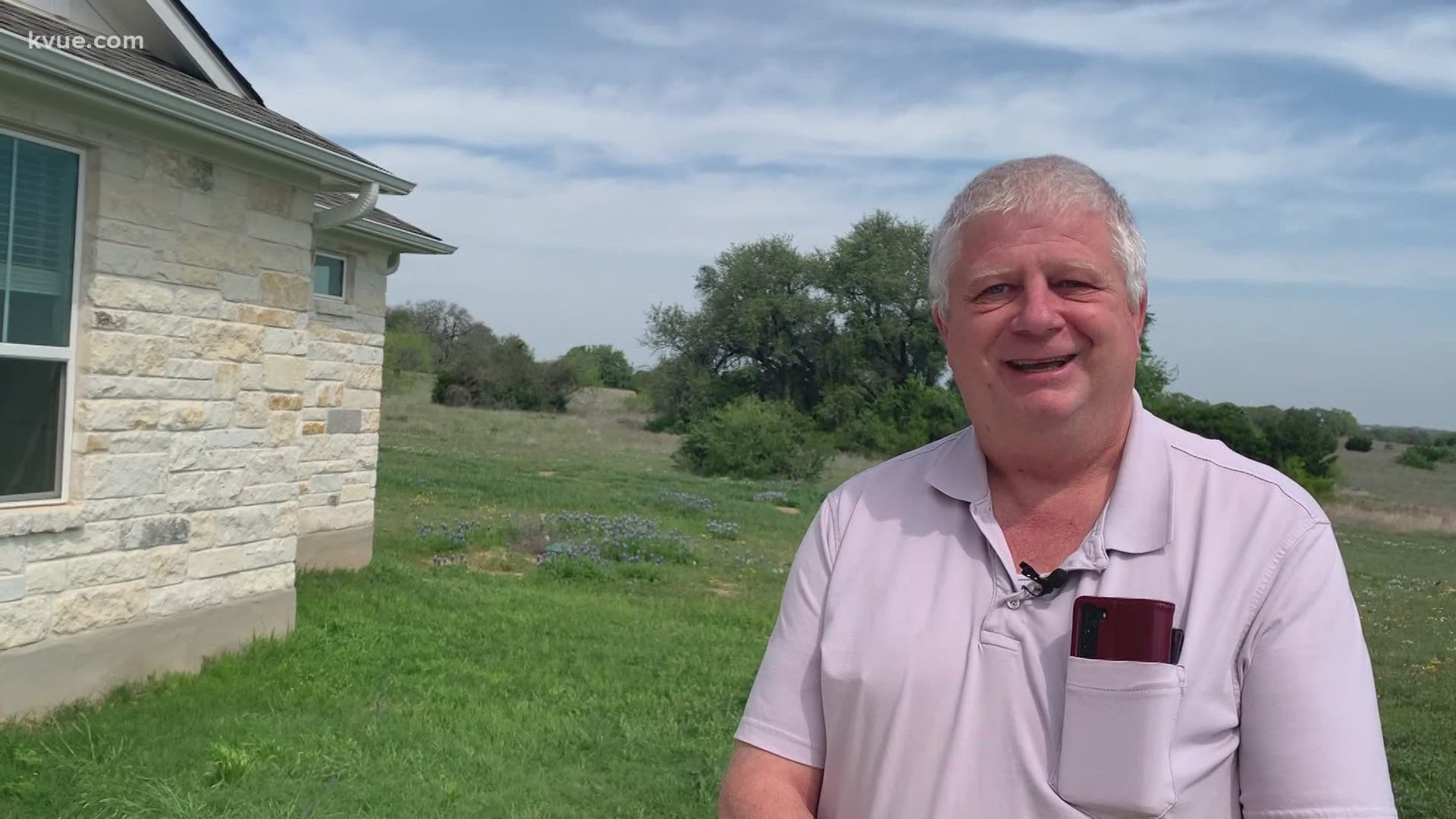 BURNET COUNTY, Texas — With record-low housing inventory in Austin and Round Rock, many more families are looking out in the suburbs and beyond, buying up land in the Hill Country at a record pace.

In this hot housing market, there is a delicate balance between having a home and being able to afford to stay in it.

Retiree Terry Standifer had plenty of hobbies and experience to know it was time for a change.

“The only way you gain any benefit from a rising cost in housing is actually to move. With property taxes in Austin becoming more like the Bay Area, where even if you can afford the house, it becomes difficult to service the interest or the taxes on the house,” said Standifer.

The peace and quiet of the Hill Country drew Terry Standifer and his wife, Diane Standifer, to Cloudwood Ranch in Briggs, one of the growing number of ranchette communities where people can still build a home and get some land.

“I would say when you walk, when you come here, regardless of your day in Austin, you can just breathe. The air out here is so clean. It’s quiet. It's nice,” Terry Standifer said.

It is what's drawing more people out of Austin and into the 17-county region considered the "Texas Hill Country." The population is now 3.1 million and expected to jump to 4.3 million in the next 10 years.

You can see the growth. In the last quarter of 2020 during the pandemic – Hill Country rural land sales hit a record, up 85% over the year before. And Hill Country land is the fastest-selling across the state, according to the Texas A&M Real Estate Research Center.

“First quarter 2021 sales of large-acreage rural properties grew more than 50% in West Texas and 37% statewide compared to 2020,” said Dr. Charles Gilliland. “First quarter activity exceeded the remarkable levels seen in the third and fourth quarter of 2020 in most areas.”

“We're pretty much sold out of inventory,” said Chad Calhoun, a ranch land broker for the last 23 years at Jim Perry Ranch Sales in Burnet. “I've sold a lot of land to people from Liberty Hill, Leander, Cedar Park and Georgetown. They want what they bought 10 or 15 years ago in those same cities. Now, they have to go 15 to 30 miles further out to get it.”

Land that was selling slowly for years is now sold out.

For example: The Peninsula along Lake Buchanan, which is about an hour outside of Austin along State Highway 29. Since 2015, Calhoun would sell three to four lots a year. Last year, he closed on the final 45 lots.

“The word has gotten out that Austin is a boomtown and this is where to place your money,” Calhoun said.

Investors have definitely capitalized on the draw, but so are many longtime Austin residents.

“My wife works at Dell and I've worked at a company for a long time. Now, both of them allow us to work remotely. So it's great,” said Scott Houston.

RELATED: 'Do we want to shrink our office space?' | COVID-19 effect on Austin office spaces

The pandemic changed a lot of the way we work – even changing the vision of younger homeowners.

“The original plan was to buy this property and use it for a retirement place somewhere down the road because, obviously, the prices are skyrocketing. But we decided to kind of flip that around and go ahead and build a large house or a regular-sized house here and then keep something smaller in the city, so we can have both city amenities and live out in the country,” said Houston.

Lewis and Lavenda Elmer traded in close-knit community living, which they enjoyed for years in Cedar Park, for the country at the end of 2019.

“Our next-door neighbors were living 20 feet away when we were living in Cedar Park. He actually came over, knocked on my door one time and told me, actually asked me what was going on. He was giving me a hard time about snoring. He could hear me in his house next door,” said Lewis Elmer.

The Elmers' Burnet County ranch has left Lavenda with a 30-minute commute, but the couple said the money they save on taxes has been worth it.

Ranch communities are also pulling out all the stops – running lines for high-speed internet, combining modern conveniences with the country draw.

The Elmers agreed to let the developer put a high-speed internet tower on their property, something all of their neighbors now enjoy.

“I've got the best internet I've ever had,” Lewis Elmer said.

“My go-to place in the evenings is on my back patio, just watching all the hummingbirds,” said Lavenda Elmer.

Scenic landscape and wide-open spaces are why so many of us choose to live in Central Texas.

“We're so excited to be out here,” said Terry Standifer. “It's hard to contain ourselves.”

Whether it's a great escape or a place to work and play, the boomtown growth continues to spread.

“It will move this way. This is about 30 miles out of Cedar Park,” said Standifer.

It is life in Central Texas ... in this hot housing market.

According to the Texas A&M Real Estate Research Center, activity in West Texas expanded, driving dollar volume up 103.97% and the number of sales up 53.28%.

In the Gulf Coast-Brazos Bottom and Austin-Waco-Hill Country regions, the number of transactions increased 48.34% and 39.81%, respectively. The Northeast region grew 31.60% in sales volume. Even the Panhandle and South Plains had a sales increase of 17.76%.

Bucking this trend, Far West Texas sustained a sizable drop in activity, retreating 22.61% due to a sudden halt in purchases from the oil and gas industry.

The uptick in demand began to incite price increases, with the Northeast region’s prices rising 12.11% to $5,423 per acre. Prices in the Gulf Coast-Brazos Bottom followed suit, increasing 11.22% to $7,069 per acre.

The Far West Texas region did not register enough sales to provide an accurate indication of price dynamics there.

Monica's Law: How a tragedy changed the protective order search process in Texas

News literacy: The social media algorithm that influences your newsfeed