Did COVID-19 impact the amount of office spaces in the Austin area? KVUE investigates the future of work life in Austin and what's changed in the last 18 months. 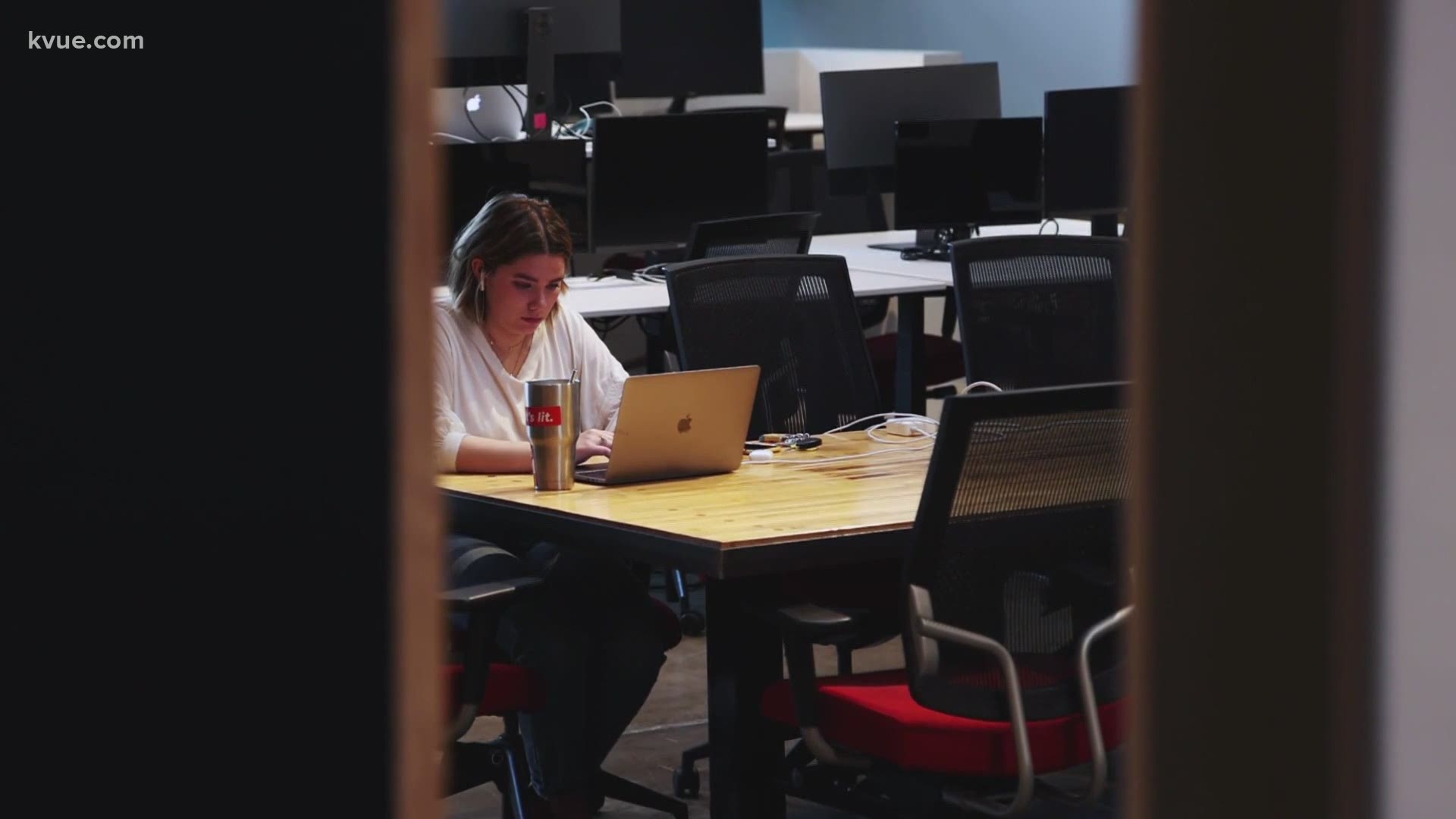 AUSTIN, Texas — Boomtown is KVUE's initiative to track the explosive growth in Austin and the Central Texas region.

As a part of KVUE's Boomtown coverage, we looked into the ever-changing world of office space in Austin. Even through the COVID-19 pandemic, office spaces remained a hot commodity.

Return to the office?

At this point, it might be a sight you're not that used to: people being back in the office. But it's something businesses are starting to reintroduce.

"You know, that meeting-in-person experience can be really powerful for a company, even when you're just remote," said Scott Francis.

Francis is the owner of BP3, a consulting company that decided last year to leave its original office space.

Those questions were what led BP3 to Red Velvet Events offices.

"We were shopping for new neighbors, new roommates, and his happened to be coming up and [Francis] said, 'Wait? Shouldn't I throw our name into the mix?'," said Cindy Lo, owner of Red Velvet.

"We have some unfair advantages in that we did some company events here," explained Francis. "That real unfair advantage is my wife [Lo] owns the building for her company's permanent home."

The couple looked at it as a chance for both of their companies to thrive. For BP3, it was a chance to try something new.

"Maybe the extra wrinkle is, as we come back, we won't have a dedicated desk for every person. But on any given day, they can find a chair and a desk and a place to work," Francis said.

But what about the rest of Austin? With plenty of construction underway, what happens to the office spaces that once were filled, but now sit empty?

"Office space has held steady. It hasn't declined really. It's held steady in some submarkets and risen in other submarkets," said Alan Peters, a real estate agent who helps tenants find offices. "I'd say over the last couple of months with the success of the vaccinations, there's definitely a lot of momentum to get back into the office."

Now, there are 53% more available office spaces compared to 18 months ago.

However, Peters pointed out that it's not just people ditching the office space altogether, but rather mostly due to new construction and downsizing. He doesn't expect the work from home model to be the norm forever.

"All of these corporate relocations to Austin ... they aren't coming here with the expectations that people are working from home. They want to have an office for them so they can recruit, retain, train. Have high-performing teams," Peters told KVUE.

Putman and Aquila fill the offices for the owners of 7700 Parmer Lane, a building that can hold up to 5,500 people, but is empty right now.

Even though the space is empty, every office in the building is leased. Putman said he sees some changes coming, but the office will still be a part of any company.

"I think the days of everyone having their own office and not being there are probably going to be behind us for the time being," Putman added.

Austin-based Dell Technologies has announced it's moving to this new model.

After a year of its Round Rock campus sitting empty, Dell has a re-imagined look at its workplace moving forward, including online reservations for workspaces, a true hybrid model that brings people in and out of the office.

Putman said he expects to see other companies follow this trend.

"We expect, again, how they're going to use it is evolving," Putman said. "These tech companies would scale up and down by having increased density. Going forward, we don't expect to see as much density."

"You know should I be fully remote, or fully in office? I think there are some really good hybrid solutions to get a smaller space or shared space that you're only paying some of the rent for. And sharing with another company because if you don't need the space all of the time, that's awesome and it's an opportunity to save some money," Francis said.

Defenders: Why Central Texas development may be partly to blame for toxic blue-green algae