There's an increasingly dangerous cyber arms race going on in the world. The good news? San Antonio is leading the way in cybersecurity. 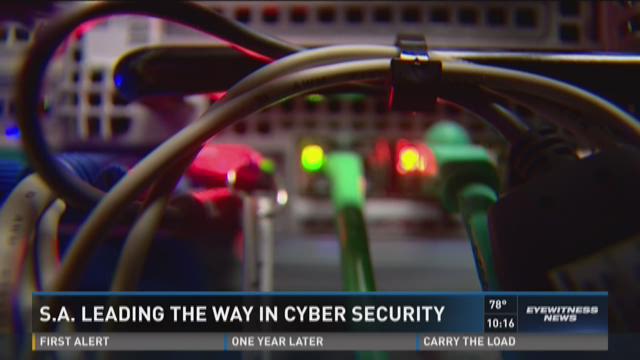 This year, experts say we'll have a total of 6.8 billion connected devices on the planet, each one a tempting portal for hackers who want to steal your identity, your savings, or even shut down a city.

It's an increasingly dangerous cyber arms race. The good news? San Antonio is leading the way in cybersecurity.

Imagine San Antonio losing power due to a cyber-attack, then all of South Texas, then the entire Texas power grid shuts down, possibly for days on end.

"An attack on the power grid is definitely not far-fetched. We've actually seen it,” Congressman Will Hurd said. “This is no longer in the theoretical world."

It’s not far-fetched because much of the nation's power grid was designed 100 years ago.

"There have been incidents where entire cities have been blacked out as a result of a cyberattack," said Dr. Greg White, a cybersecurity professor at UTSA.

Last year, alone, many major cyberattacks succeeded on power grids and beyond.

"If you're a terrorist and you're looking to wreak havoc, this is a place where you can do that," Congressman Hurd said.

The access point is often with smaller agencies and vendors that service major institutions, but lack their security protocols.

One solution is to improve the culture of cybersecurity… with a card game.

Another project in development is a video game about cyber-bullying designed to teach better passwords and procedures.

San Antonio, itself, has a culture of cyber know-how second only to Washington, D.C. in cybersecurity talent, jobs and research.

"To think that San Antonio has the largest collection of cybersecurity professionals outside of the nation’s capital is amazing,” Congressman Hurd said.

San Antonio is truly at the top of the industry, the tip of the spear, defending against unseen enemies.

"Everybody knows that San Antonio is ‘Military City USA,’ but we're starting to become ‘Cybersecurity City USA,’ and that's great,” Congressman Hurd said. “And the role that we're playing in defending our digital infrastructure across the country is pretty huge."

Another plus for San Antonio is that the Department of Homeland Security selected UTSA to lead a team that's developing cybersecurity standards for information-sharing between the private sector and the U.S. government.