"They went together." Local couple dies on the same morning after battling COVID-19

A local family is sharing their parents' love story after passing away from battling COVID-19 in the hospital. They were just weeks away from their 57th anniversary. 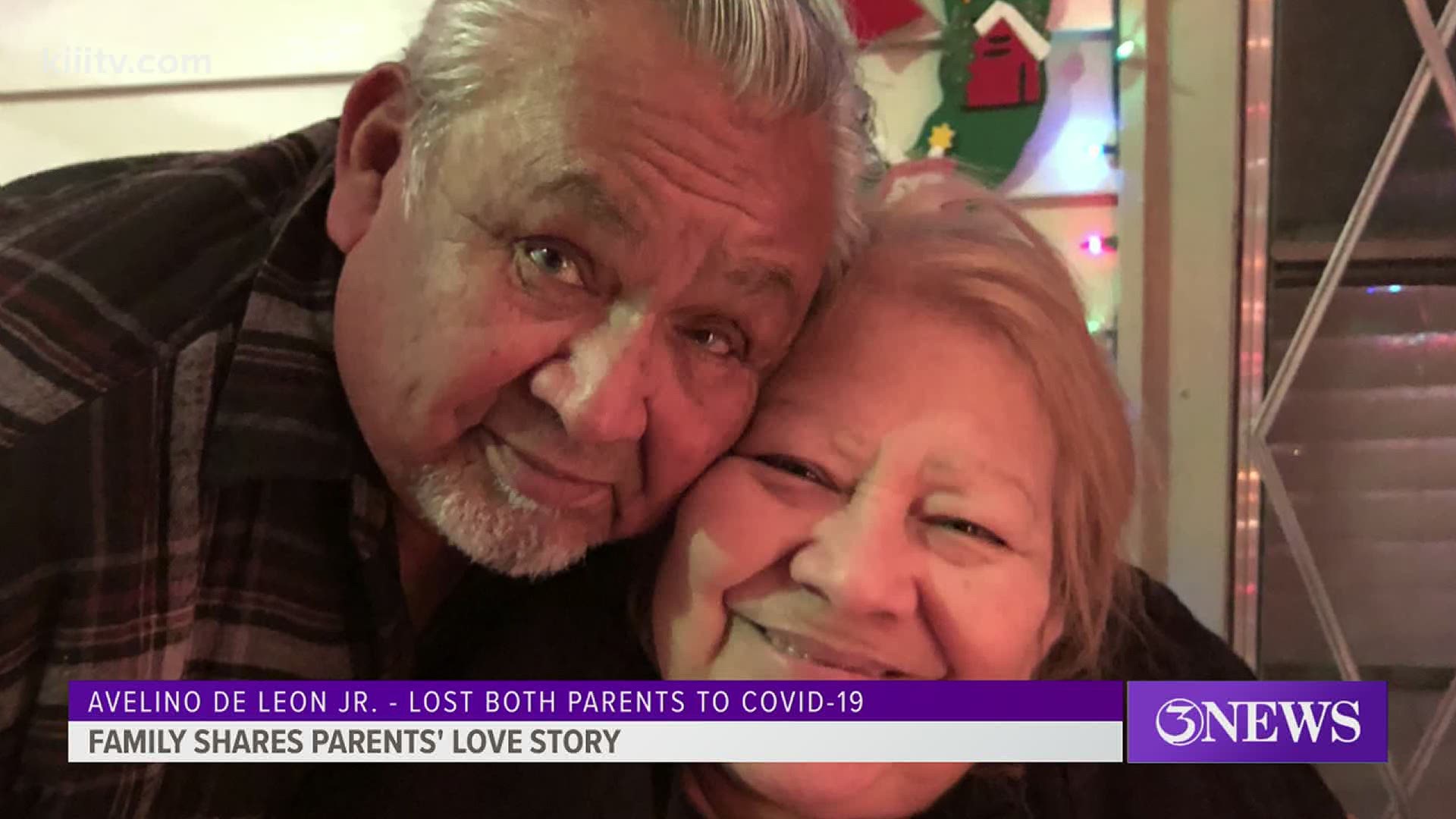 CORPUS CHRISTI, Texas — It was a love story built on nearly 60 years of precious memories. In just a few weeks, 78-year-old Avelino De Leon and 73-year-old Anita De Leon would be celebrating their 57th wedding anniversary.

Their loved ones shared the couple had four children, and eight grandchildren, and that they always would find a reason to celebrate just about anything in life with a family barbecue. They were also each other's life-long dance partners.

In their younger years, Anita worked in home care for over 40 years, and Avelino worked as a truck driver and then later retired as a custodian for Corpus Christi ISD. All of their children attended CCISD schools, graduating from Moody High School. Two of their daughters now work for the district as well.

However, on the early morning of August 13, the couple died from COVID-19 complications after battling it for well over a month in the hospital. Their children say their mother and father died within seconds of each other. Now, they're sharing their parents' love story in hopes that those who still aren't taking the virus seriously will have a change of heart.

It was in late June that the De Leon family first began to see their lives altered by the coronavirus.

"My dad had a lot of sinus issues, and so we just assumed, oh he's having sinus problems, allergy problems," said Deborah De Leon in a Zoom interview with 3News. Her siblings, Avelino De Leon Jr. and Denise Garcia, also joined the interview virtually. The siblings have another sister, Donna.

Deborah explained that their mother took care of their father, until she too began to feel a little 'sluggish.' The daughter made a call to their doctor, described their symptoms, and after receiving guidance to get tested, they both produced positive test results.

On July 2, their father was taken to the hospital.

Three days later, on July 5, their mother was taken to the ER as well. Both parents were then at Christus Spohn Shoreline. Their father in the ICU on a ventilator, their mother battling the virus on the third floor.

Loved ones weren't allowed to visit at the time, but they were able to call their mother's room phone. They said their mother would ask and cry constantly for her husband, longing to see him. Her breathing began to worsen. Eventually, Anita was also moved to the ICU and placed on a ventilator.

"We thought, well that's what my mom wanted. She wanted to be closer to my dad. Even though they were both sedated, because they were on the ventilator, but we felt they were so close."

The siblings shared that though their father had been born in Tivoli, that he and his future wife wound up growing up close to one another when they were younger. Their children said they lived a block apart, and that when their parents were both in the ICU, they were told that their beds were relatively close as well.

"Their houses ended up catty-cornered almost like their hospital rooms," Garcia said.

"She made her way to the ICU with him," said Deborah.

"We just made the decision, let them go, let them both go. They wanted to go together," Deborah recalled tearfully. "She wants to go with him, because she knew he was going. So she didn't want to leave him to go by himself because my mom took care of my dad. They were inseparable. They both went at 7 o'clock, and they had different doctors and different nurses and different rooms, and they were pronounced dead. The nurse called us back later on and within seconds, they had both passed."

The siblings said that their dad had been stable, but not in a good way. That his lungs never improved. They were somewhat hopeful after hearing of some signs of improvement in their mother's blood pressure and kidney function, but believe the virus must have been too strong. They say there is some comfort though in knowing their mom and dad passed together.

"They were the kind of couple you'd still see them out as old as they were and would still walk holding hands, wherever they were at," said Avelino Jr.

The siblings credit their parents for raising them to, "stick together, and be strong together." They smiled sharing fond memories of their parents, but say they are heartbroken and still confused as to how they could have even contracted it, believing that they had been so careful.

"We took care of our parents, we wouldn't let them go anywhere. I'd go to H-E-B for them, or my brother," said one of the sisters.

Now, they have a message for those who may still be underestimating the virus' spread.

The couple was laid to rest on August 21 in Rose Hill Memorial Park.