They lost their daughter after 7 weeks. Now they’re helping other couples of babies diagnosed with a terminal illness

Cara Hamilton died just 7 weeks after she was born. Her parents are now dedicating their lives to help other families of babies diagnosed with a terminal illness. 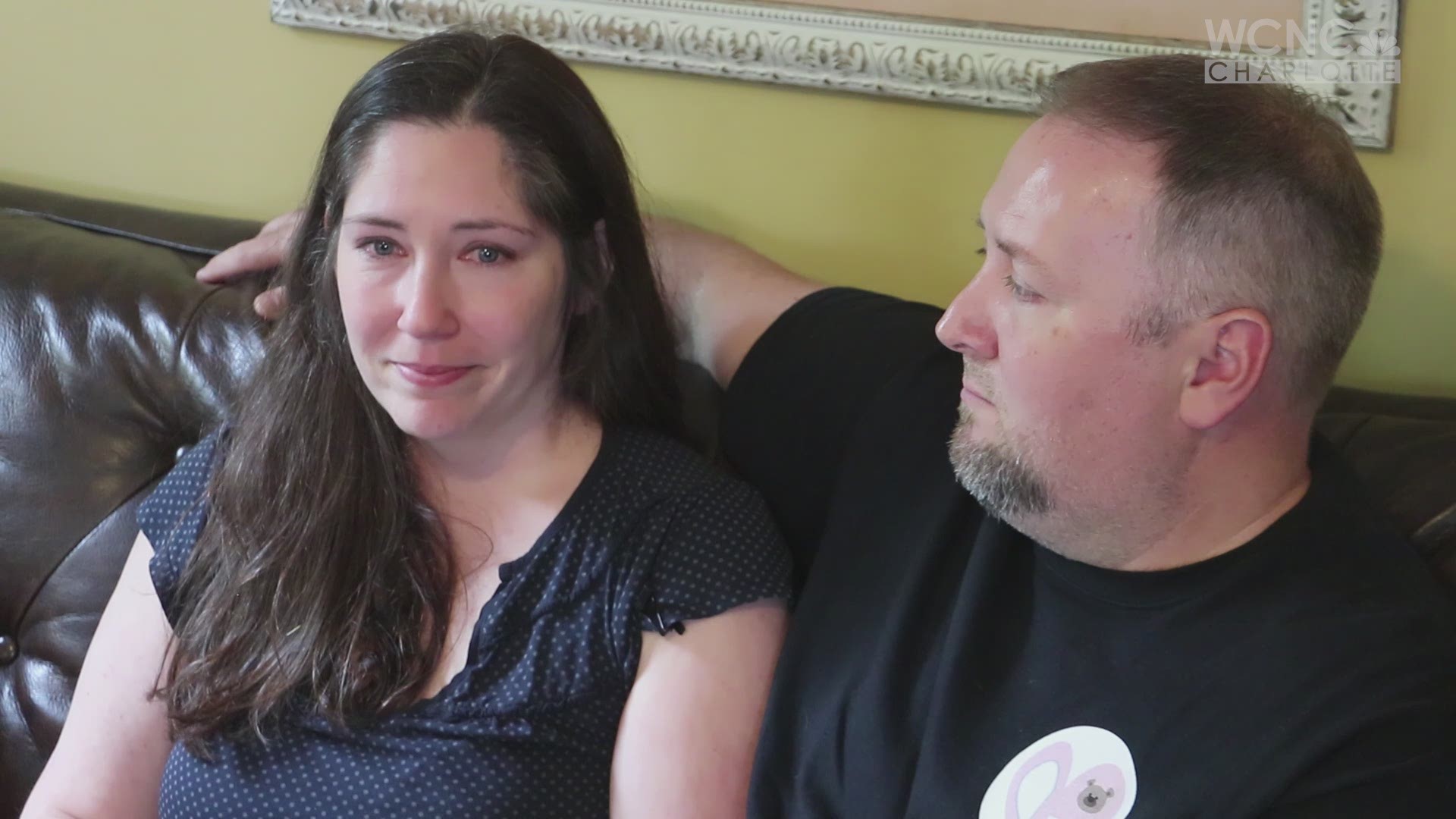 CHARLOTTE, N.C. — Tom and Jennifer Hamilton were ecstatic when they learned that they were expecting a baby girl.

The couple had three children among them from previous marriages, but this would be the first baby the couple would have together.

“We just felt like we wanted to have one together, so she was already super special when we decided to start trying and then when she told me she was pregnant,” Tom said.

“We found out on September 7 that Cara had a brain abnormality. We were 36 weeks along,” Jen said.

She and Tom were devastated. But what would happen next?

"We decided to go ahead and deliver and see if there was anything we could do to help her or to fix the problem,” Jen said.

So doctors delivered Cara, and after a quick MRI, the Hamiltons received the gut-wrenching news.

"After she was born, they did an MRI and found that it was a very large tumor and medically there wasn’t anything that could be done,” Jen said.

A few days later Cara was released from the hospital and the Hamiltons were coming home with their daughter. It was a moment they weren't even sure would happen.

Before Cara could even open her eyes, she was assigned a hospice nurse.

The Hamiltons had to quickly learn how to take care of this newborn with so many medical issues. It was brand new territory for new parents.

"Coming home was really scary because she had a feeding tube and before we left the hospital they were kind of preparing us for every worst-case scenario,” Jen said.

Cara, at any moment, could have a seizure. Her feeding tube could slip out or she could just pass away with no warning.

"Once we got her home and got her settled we were able to get into a routine and it wasn’t quite as scary. We still had a few scares when her heart monitor went off; that was always scary," Tom said.

He added, every time some monitor that was hooked up to Cara would go off, they would think, "is she dying now? Is this when we call 911? Is this the thing?"

Tom and Jen said they started slipping into a routine with Cara.

The couple was documenting every second they had with their precious baby girl. They would share the good times and the bad times with friends and family on their Facebook page.

"Meanwhile our family is growing closer together and our faith is growing stronger, friends and family are all just pouring into us," Tom said.

One of the hardest moments for him was to watch his bride with Cara.

"I think Jen only got to hold her like on her chest once, twice, just because her body was so little but her head was so big. And so you couldn’t really hold her because it was so much weight," Tom said.

Jen said the morning they lost their daughter began just like any normal day.

Jen got up with Cara at around 2 a.m. to feed her. Shortly after, Cara started vomiting up her previous meal.

“I just came downstairs with her and just held her for a while,” Jen said. “And her eyes lifted. “So I knew that something was not right. I went to get Tom at around 4 a.m. and we just sat with her and rocked her and we had music playing."

Jen called for the rest of the family and they just sat with Cara, holding onto her as tightly as they could.

“We were listening with a stethoscope to her chest and still holding onto that miracle still. Crying out to God to please let her stay with us,” Jen said.

“She was very peaceful,” Jen said.

Tom and Jen said the day after Cara died they went to a funeral home to plan for their daughter's final arrangements.

“We were talking about something that we could ask people to donate to, in lieu of flowers. Something that would create a something more lasting than flowers,” Jen said.

The two tossed around some ideas but could not think of anything that paid tribute to Cara's story.

“So we just decided in the car on the way back home that we would start something. And we didn’t know exactly what it would be or what it would look like, but let's just do something to honor her life,” Jen said.

Soon after, Cara’s Purpose was born. It was a way for Jen and Tom to connect with other families of babies who are diagnosed with a terminal illness.

"We just went full steam ahead," Tom said. "We had a friend get the website up and running and started up all of the social stuff."

Everything was just falling into place as if this was their purpose.

"The first family that we were able to help live in Maryland and they had a baby boy that was sent home from the hospital with a terminal diagnosis," Jen said."And what Cara's Purpose did -- we sent a care package to them and at that time we didn’t have a clear vision of where we were going to go with this."

They just knew they had to help somehow. And the help continues.

“We have care packages at CMC Main. So when a baby gets sent home under the similar circumstances they take a care package home with them," Jen said, "And there's an invitation inside to reach out to us."

The Hamiltons said for families struggling with a devastating diagnosis, just knowing that there’s another family out there, that knows your pain and supports you, can mean more than any monetary gift.

“I think one of the biggest things that came from that was just the reaching out was helpful,” Tom said.

Tom and Jen said while they are extremely proud of their new organization, they hope to never have to help another family again.

"Obviously we never want any baby to have a terminal diagnosis," Jen said. "But we don’t want for the ones that do to go home feeling alone or scared. We just want to try and grow to where we can reach those people."