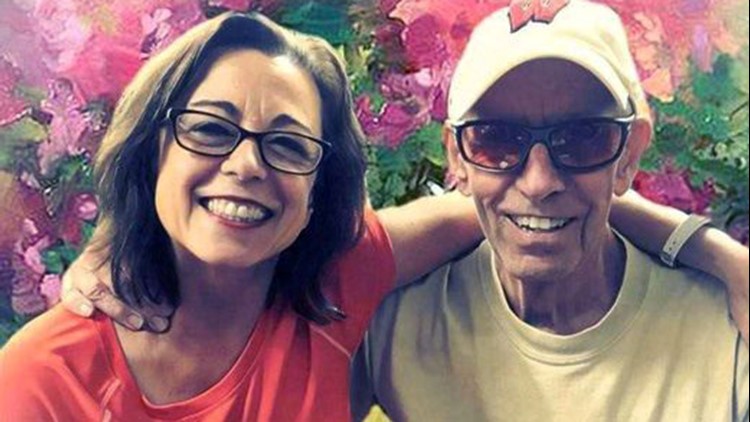 Photo by: Family photo/Milwaukee Journal Sentinel
It took more than five decades, but Mary Jane Millehan and Tom Peters finally determined through a DNA test that they are daughter and father. This photo was taken this summer when Tom of Brookfield visited Mary Jane in Roanoke, Va.

Lie Keeps A Daughter And Father Apart For 51 Years, But They Found Each Other

A lie, it was famously said, gets halfway around the world before the truth has a chance to get its pants on.

The deception in this story spanned half a century, and it kept Mary Jane Millehan from her real father, Tom Peters, from infancy until she was 51 years old.

Well, the truth finally caught up, and this daughter and father have found one another and begun the loving relationship they missed out on all those years.

"My whole past has been a lie, ever since I was born. There are times when I'm still really mad at her. I can't help it," Mary Jane said.

She's talking about her mother, who was born Carlotta Pucci and died Carlotta Hebblethwaite. In between, she was Carlotta Peters, married in 1960 to Tom Peters, a young fellow she met while both were students at UW-Madison.

Carlotta, raised in Kenosha and known to friends as Lotty, got pregnant in the spring of 1963. What she didn't reveal to Tom was that she was falling in love with another man by then.

He learned the painful truth when he came home from work to their apartment, at that time near Rockford, Ill., and found Carlotta and her lover, John Hebblethwaite, moving her stuff out. The baby, Mary Jane, was just 10 days old and was whisked away by her mother to a new place in Madison.

"I mean, that would have been an Amber Alert now," said Mary Jane, who today lives with her husband, Ron, in Roanoke, Va. She works in the insurance industry.

"I was so shocked, I don't remember saying much," recalled Tom, a retired salesman who turns 80 this month and lives in Brookfield. He was raised in Wauwatosa.

John was Carlotta's boss who had four kids in Madison and a wife he later left. Tom also worked at John's food service company for a while.

As part of the divorce process, he went in for a paternity test. Carlotta never showed up and no results were obtained. Over time, he was left with the impression that John was Mary Jane's father, not him. Carlotta never asked for child support. She appeared to want a clean break, and Tom was completely swept from the girl's life.

Tom married again in 1966 to a woman named Elaine. He adopted her daughter, Terri, and the couple then adopted two babies in Texas where Tom worked for a while and two more children in Michigan where he transferred. They returned to the Milwaukee area in 1984.

Meanwhile, John married Carlotta when Mary Jane was 6, and his name was put on her birth certificate. They lived in Madison and then Buffalo, N.Y., before settling in Beaver Dam. Two of John's sons lived with them. Carlotta did not bear any more children.

Mary Jane Millehan was about 10 years old when she posed for this snapshot with her mother, Carlotta Pucci Hebblethwaite.
Family photo/Milwaukee Journal Sentinel

Mary Jane was 19 when she married a Navy guy and moved to his hometown of Roanoke. They divorced six years later. She married her current husband, Ron, in 1996. They have no children.

John and Carlotta both earned advanced degrees. Carlotta worked as a school psychologist. Mary Jane says Carlotta was a good mother and that she and John gave her a happy childhood.

Not long after Carlotta died, Mary Jane was told by two of her mother's close friends that John was not really her father, despite his insistence that he was. This confirmed what she had long suspected. She seemed so different from him.

Carlotta told the friends in confidence that Tom was the father, but she never shared that truth with her daughter or anyone else. It was for the best, she insisted.

Tom's wife, Elaine, was diagnosed with Alzheimer's disease in 2012. He cared for her at home for three years, and now she is largely unresponsive and in a memory care facility a short drive from his home. He visits her every day.

In his abundant alone time, Tom searched the internet for the whereabouts of Carlotta and found her death notice. Curious about the past, he then contacted Carlotta's brother, Bernie Pucci, in Tennessee. Bernie, who had once sent Tom a photo of Mary Jane as an adult, told him he long believed Tom to be Mary Jane's father, but decided to leave it alone.

Bernie told me he confronted Carlotta, and she said Tom was not able to father children due to a low sperm count, which we know now to be false.

"I'll never forgive my sister, bless her soul. I'll never understand the reasoning or thought behind it from her side," he said. "To keep that back from Tom is just a crime, and to have Mary Jane not know who her father was."

In September 2015, Bernie and his wife, Linda, gave Tom's phone number to Mary Jane, and she called him. They talked for an hour and a half, and soon they were chatting numerous times every day. Everything clicked between them.

They decided to remove all doubt and get DNA tests, Mary Jane in Virginia and Tom here. The resulting probability of paternity: 99.99997%. "I rounded it off to 100," Tom joked.

They were thrilled. Mary Jane traveled to Wisconsin in October 2015 to be reunited with Tom. They hugged and held hands and cried. She's been back here 20 times, and Tom has visited her in Virginia a few times.

In 2015, Mary Jane Millehan and Tom Peters were together in person for the first time since Mary Jane was an infant. Although Mary Jane's mother lied for years about the identity of Mary Jane's father, a DNA test determined it was Peters.
Family photo/Milwaukee Journal Sentinel

Mary Jane will be here Aug. 23 to celebrate her dad's 80th birthday at a party. She threw her own "Meet My Dad" party in Virginia during one of Tom's visits. They had balloons and stickers that said, "It's a dad!" and "It's a girl!"

"She's brought so much joy to my life," Tom said, especially at this difficult time as his wife slowly slips away.

He says he's getting too old to harbor anger over the way things went, adding, "I'm just happy I've got her now."

Over the past three years, Mary Jane has sent him 68 thinking-of-you cards. He showed me the stack. I was touched by the message she wrote in one of them. It cuts right through the lie.

"You are my dad, and I am your daughter, and that will never ever change!"