'I had no words': Keller ISD bus driver with serving heart surprised with brand new bike from student

High school senior Caden Filler said everyone who donated to his fundraiser helped him serve a bus driver who always serves others. 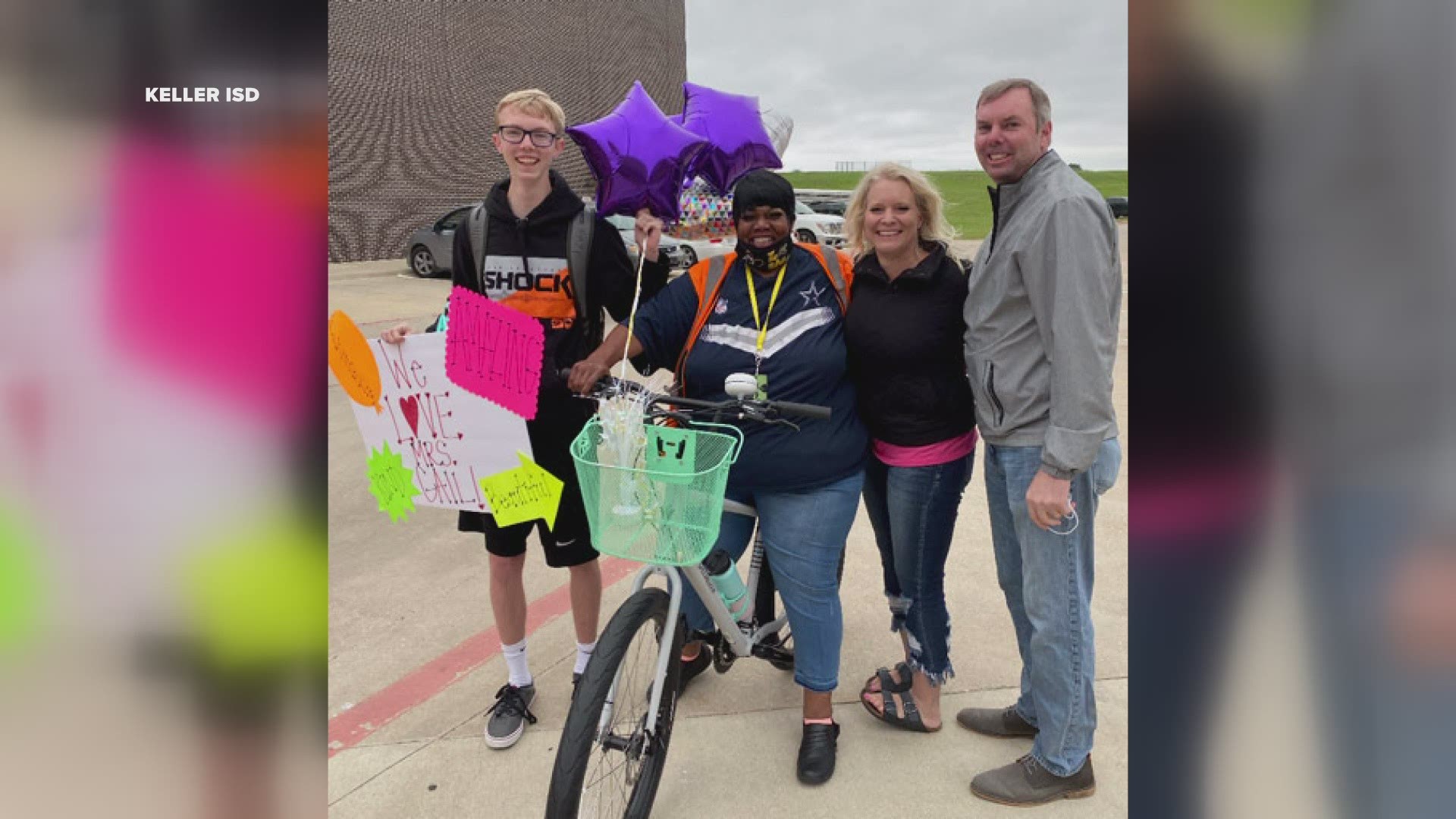 KELLER, Texas — A special bus driver at Keller ISD, who says her calling is to bless every kid who gets on her bus, received a very special surprise from one of the students.

With the help of the community, Keller High School senior Caden Filler was able to raise more than enough money to buy Gail McDaniel a brand new bike, helmet, water bottle, and a gift card for shoes.

"I saw a need and acted on that need, and was able to bless Ms. Gail’s life," Filler said.

Not only did the North Texas community pitch in for the surprise, but people from other states got involved. And it all stemmed from a simple, "Hello."

Filler rides the bus every Monday and Friday to and from the Keller Center for Advanced Learning for his advanced classes.

The high school senior said every time he gets on McDaniel's bus, she welcomes the students with big a "Hello" and always asks how they're doing. Filler said at first, he met the optimism with quietness and would hurry to his seat.

But that changed after a few weeks, when Filler said he began talking to McDaniel.

"Ever since then, Ms. Gail and I routinely hold up the other kids trying to get on the bus, as we stand and talk about how the weeks are going," he said.

The school district said McDaniel is a natural at developing these relationships with students.

RELATED: 'I just needed someone to talk to': UNT student uses class essay to vent. Her teacher's response brought her to tears.

During the duo's weekly conversations, Filler learned that McDaniel wanted to get an exercise bike to improve her health, but she wasn't able to financially do so at the time.

This sparked an idea in Filler's mind, and he began researching bikes that would be best for her and started a fundraiser to gain the money needed to purchase the bike.

"I wanted to repay the kindness she has shown me and ensure that she knows the kids on the bus also care about her," Filler said.

People from Texas, Chicago, Washington, and California all made donations, resulting in his updated goal of $800 being surpassed overnight.

Filler said the extra support overwhelmed him and that it opened his eye to realize how many people in the world are willing to help if they just receive a cause.

"All of these people helped and trusted me to serve a bus driver who always serves others," he said.

Last Monday, Filler said he arrived at school a little early and set up the bike and a sign for McDaniel.

He says they hid the bike so that it would be a surprise. The boy said when she pulled up to drop off the students he waved down McDaniel. He says at first she seemed confused but her expression quickly changed when she realized there was a bike around the corner.

Credit: Keller ISD
Keller High School senior Caden Filler got to school early to surprise his bus driver with a brand new bike on May 10.

"She covered her face in amazement and struggled to get the bus to stop. She opened the bus doors and repeatedly yelled, 'Is this for me, is this mine?' before getting off the bus," he recalled.

That's when Filler said McDaniel ran up to him and his parents and hugged them, thanked God, and then immediately took her new wheels for a spin.

McDaniel said she was not only surprised, but also excited about her new bike.

"I felt really, really special," she said. "I've been talking to the kids about this for about six or seven months – asking them to help me look for a deal on the internet, and I was going to save up the money. But the gift from this young man touched me and I had no words. I cried right there on the bus," she said.

Filler said he was so overwhelmed with emotion that he could barely tell McDaniel that the bike was for her.

"I felt tears of happiness clouding my vision as I finally realized I was able to 'repay' her for the kindness she had shown me all year long," he said.

Credit: Keller ISD
Gail McDaniel was surprised and overwhelmed with joy after being surprised with a gift from a Keller ISD student.

The boy also shared that he thought about the fundraiser for three months before bringing to act of kindness to life. Now looking back, he says never listen to the voice in your head and never pass up the opportunity to make someone's day.

"Never underestimate the power that small acts of kindness have," Filler said

Filler said he now knows that something as simple as saying, "Hello," to a bus driver can expand into a greater opportunity. And in return, Filler helped repay the bus driver who always serves others.