Four women get second chance at life thanks to court program

Four women, who had been in and out of jail for nonviolent offenses, are getting a second chance at life thanks to a new court program. 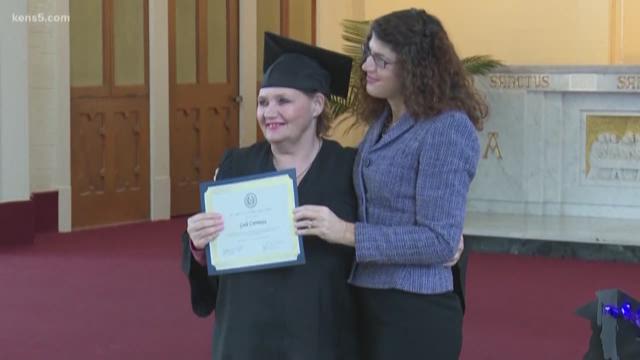 Inside a small chapel, four women are honored for their work putting their lives back together. These grads represent the second class to finish the Esperanza Court Program.

"These women need to change their lives. They need to reclaim their lives in order to stop that revolving door of incarceration,” explained Judge Lorina Rummel of the 144th District Criminal Court.

These women found themselves behind bars for prostitution. But to change their lives, they have to face the trauma that led them to the streets.

That abuse leads to drug use, which turns to prostitution to pay for that habit, according to the judge. Through their testimony, the graduates shared the reality of their old lives.

"I managed to work enough to get high and have a normal life,” one woman explained.

"He told me to go to the corner and don't come back until I had what he wanted. My unborn baby and I would be killed if I didn’t,” another said.

In addition to a certificate, these women get to thank their support system, the family members who have been there through arrests and relapses. The program takes two to two and half years to complete. In addition to counseling, graduates get help finding housing and reaching education goals.

"It was women in powerful positions or women you could look up to, that helped plant the seed for that epiphany that I had,” graduate Carol Gutierrez said.

Their next goal is to spread the word that it's never too late to get help.