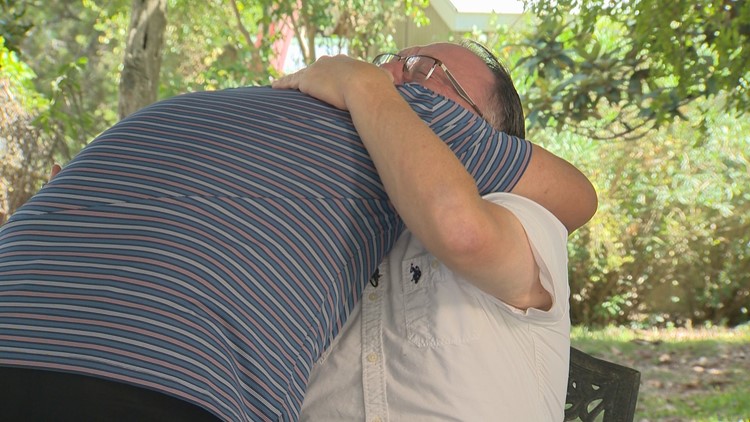 Photo by: KENS 5
Cory Hranicky hugs his brother after tearfully admitting he has not had time to grieve his son's killing.

‘I haven’t faced the reality’: Father of teen killed by Kerrville policeman discusses his son, forgiveness

KERRVILLE, Texas — Cory Hranicky has been on the go since his son was killed in an officer-involved shooting. When he settled down to talk about the incident, he broke down in tears.

“I haven’t grieved for him because I haven’t had time,” he said.

The 53-year-old father of three has been balancing funeral arrangements and accommodating funeral guests since Sept. 1

Hranicky said his last conversation with his son, Tommy, was about owning up to chores around the house. They hugged, kissed and said goodbye.

According to Hranicky, members of the Kerrville Police Department and the Kerr County Sheriff’s Office came to his home. He said they were asking questions about his 17-year-old son but would not answer any of his. Hranicky said he demanded answers,and was eventually told his son was killed by a Kerrville policeman in an officer-involved shooting.

“I did not handle the news very well,” he said. “I said (things) and reacted in ways I’m not proud of.”

Police said they got calls about a man waving a knife on the 900 block of Sidney Baker Street.  A news release states Sgt. Hal Degenehardt responded to the scene. According to investigators, Tommy was armed with a knife.

Investigators said the teen advanced on Degenehardt even as he commanded to stop and drop the knife. KPD said the sergeant even retreated, before eventually shooting and killing the teen to protect himself.

“What they said he had done, I cannot imagine that happening knowing him for the past 17 years,” Hranicky said.

Tommy Hranicky's father said it was a major deal for his son to cut his hair. It was a step for the introvert to come out of the shadows.
KENS 5

Tommy moved to Kerrville more than a year ago, his father said. The teen was adopted, and an introvert working hard to come out of those shadows. In fact, he cut his hair, which his family said was a big deal; Hranicky said his young history buff used his precious locks as a shield.

His son had a girlfriend, and attended Tivy High school. The teen also had Asperger’s Syndrome. Hranicky said his son had taken a few alternative learning education courses.

Tommy joined the Future Farmers of America, theater and considered being a member of the ROTC.

His son had even declared his political allegiance to the Republican Party.

Hranicky said he called KPD to talk to the officer who shot his son; he wanted him to know he was forgiven. In fact, he’s holding off any judgement on the officer-involved shooting until the Texas Rangers and local police conclude their investigation.

Now that his son’s final services are complete, Hranicky must deal with the surreal and tragic. He admits hasn’t taken to the time to grieve.

“I haven’t faced the reality,” he said.

Degenhardt has been placed on a non-punitive leave pending the investigation’s conclusion. Police said they have body cam and in-vehicle video from the officer on the day of the shooting.