Watch: Woman says snake jumped into her home when she went to check on noise at her front door

Ashlye Robinson, who lives in the Houston area, says she was checking on squawking bird when the snake 'jumped' in. 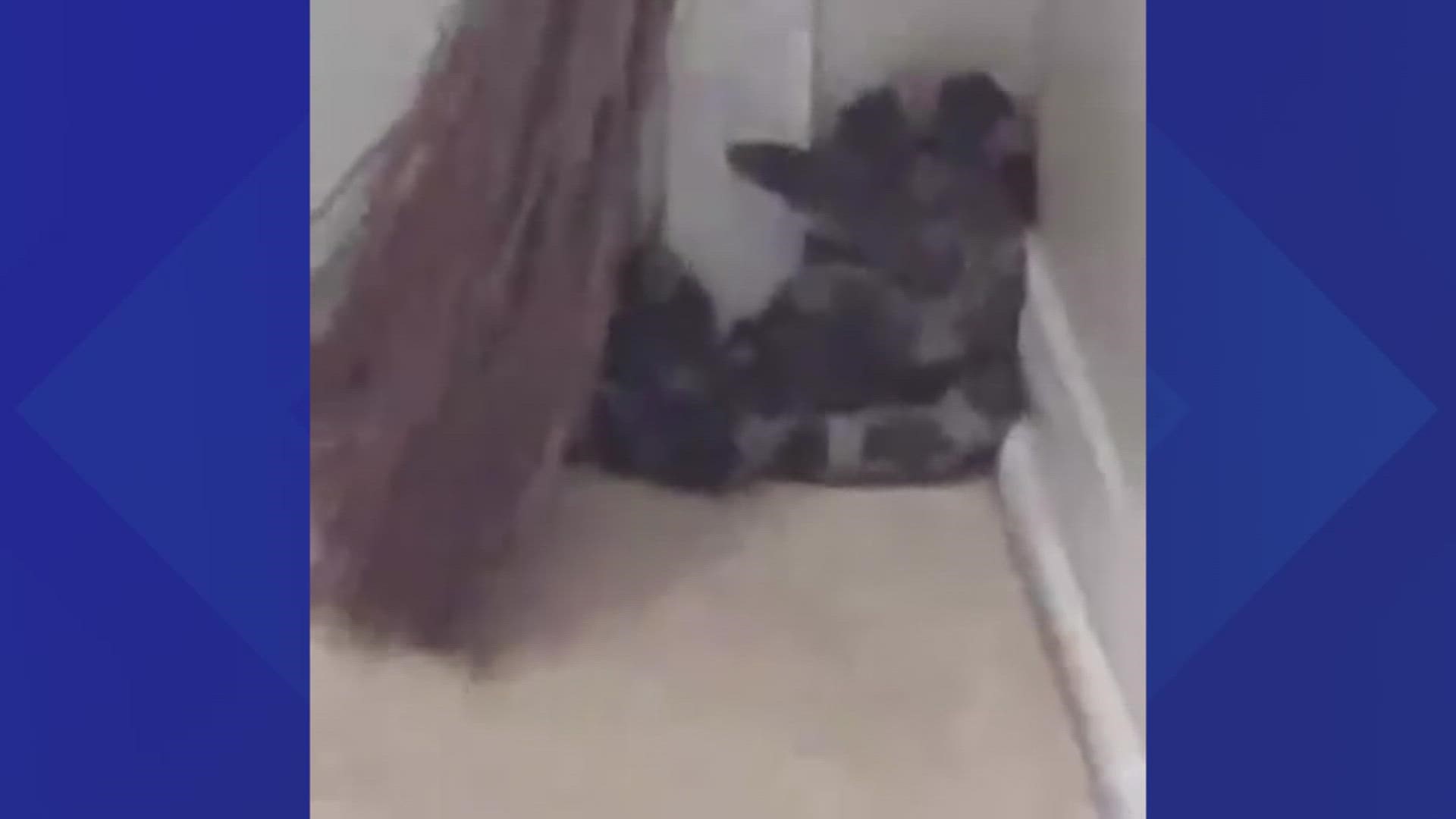 FRESNO, Texas — Ashlye Robinson recently sent a wild video into KHOU 11 that shows her encounter with a snake at her Fresno home.

Robinson explains she kept hearing a bird squawking at her front door, and when she opened it, a snake fell in.

She says she thought the bird was making noise because her puppy was harassing it, but that wasn't the case.

"...no, it's not. A snake jumped — literally jumped in my door when I opened it, and it scared me so bad that I jumped back and closed the door," she says.

The video shows the snake, later realized to be a harmless, non-venomous rat snake, curled up in a corner near the door, next to a broom.

"My brain was just like run away," Robinson said.

Robinson says she was able to get the snake back outdoors on her own using a broom, which the snake tried to attack. She then called in a cruelty-free animal expert to remove the animal from her property.

They are joking now, but in the heat of the moment the snake sacred Robinson half to death.

"I refused to turn my back on it because I have little kids and I knew if I turned my back on him, I'd probably never find him again in this house," she said.

Recently, snakes have been spotted in the strangest of places.

"I got up in the middle of the night to go to the bathroom," Patty Tidwell said. "I opened my bathroom door and turned around and there was this big python on the back of my toilet."

From a West Texas bathroom to a bank off Highway 290 at Fairbanks where an AC repairman changing filters came face-to-face with a 6-foot rattlesnake, snakes have been active this summer.

"Had me pinned on one side and he was blocking me to get to my ladder," said Jesse with Kleen Air Services. "I called the bank and the bank called 911."

Back to Robinson and Martinez’s snake story.

Martinez, a 17-year-old high school senior with a snake side hustle, relocated the rat snake.

"It was just snake show and tell," Martinez said.

"She was so gentle with him and totally calmed down the whole situation and she even had a little box for him," Robinson said.

HAVE SOMETHING TO SHARE? Remember you can always send KHOU 11 your photos, videos and news tips using the Near Me function in the KHOU 11 mobile app.

Also watch: Texas man finds a snake in his toilet - what would you do?