Vidor Police Chief Rod Carroll said the officer used her Taser, which had no effect on the dogs, before she was bitten. 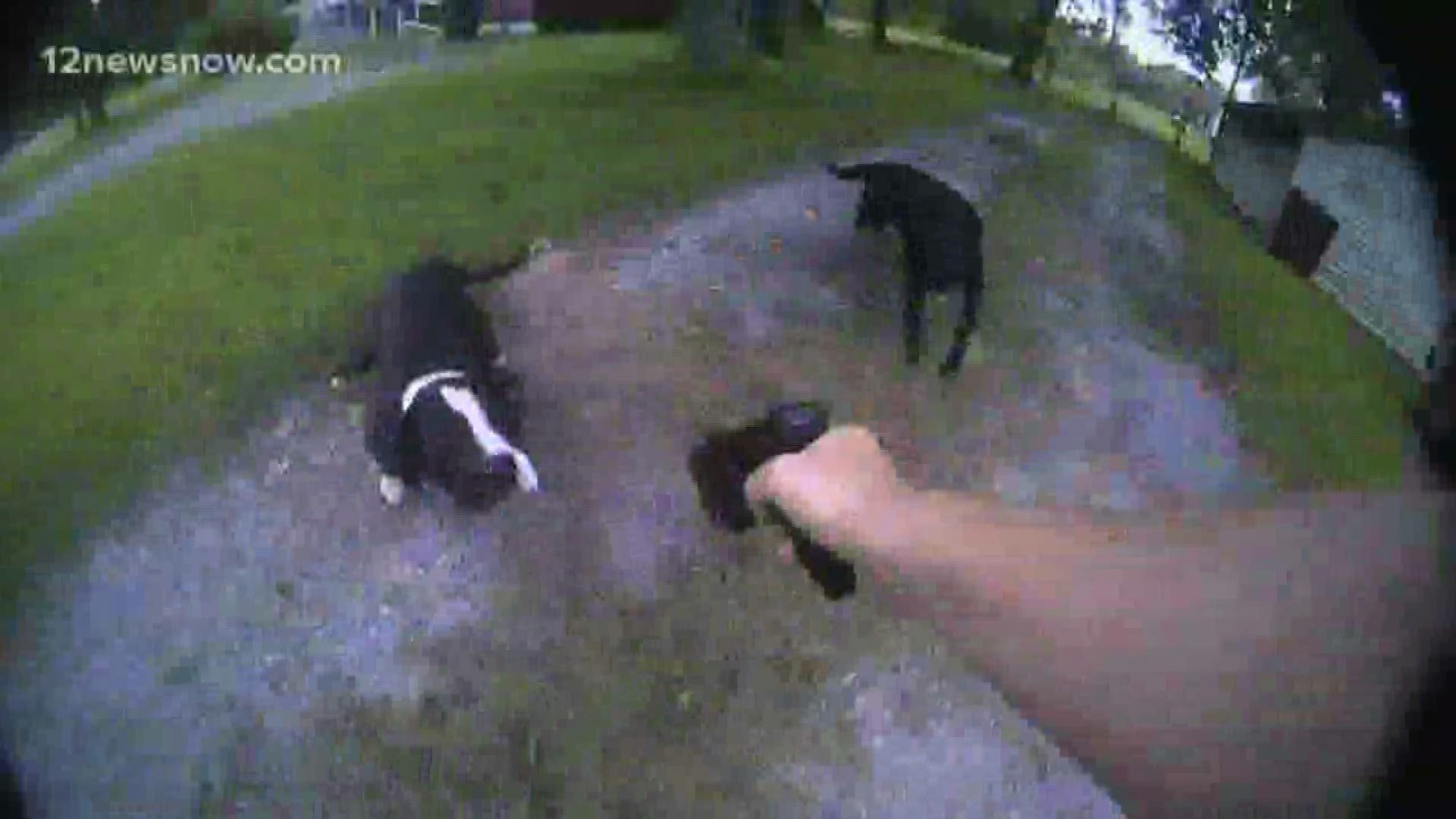 A Vidor officer is recovering after she was bitten during an attack by two dogs on Sunday, forcing her to shoot and kill one of the animals.

The officer was called to the 500 block of Alamo about two aggressive dogs around 11:45 Sunday morning.

The dog’s owner, Tina Potter told 12News on Sunday she left her home around 11:30 a.m. Sunday morning and left her two dogs in the backyard.

However, they were gone when she got back. Potter said all that was left was a note from animal control.

"The neighbors all ran over and told me that our dogs are not here, and a cop shot our dog," said Potter.

"They're not harmful, they never bit anyone," Potter said.

Police say the caller told dispatch the dogs were in his yard, and when the officer went to speak with the caller, the dogs charged the officer from the next door yard.

The officer used her Taser, which had no effect on the dogs, and she turned to retreat to her patrol car according to a Vidor Police Department news release.

The release said as she was going back to her car, one of the dogs bit the officer on her left forearm.

The officer fired a shot, missing the dog and stopping the attack according to the release.

The dogs went back to their yard, and the officer went to her vehicle, positioning herself behind the driver's door according to the release.

She was then approached by the dogs from the back of her vehicle and fired a shot, hitting one of the dogs.

The dog was killed, and the second dog was taken by animal control according to the release.

The officer was taken to a medical facility and treated for the bite. Neither of the dogs had a rabies vaccination, and officers are waiting for the results of the rabies test and quarantine.

The attack happened in the caller's front yard and in the roadway according to the release.

On Sunday, August 25, 2019, at approximately 11:45 AM, the Vidor Police Department Dispatch Center received a call of 2 aggressive dogs in the 500 Block of Alamo. The caller advised that 2 dogs were in his yard acting aggressive. Upon arrival the officer did not see the dogs. As she went to make contact with the complainant / caller, in his front yard, the dogs charged the officer from the yard next door. The officer deployed her Taser with no effect on the dogs. As she turned to retreat towards the street and her patrol  vehicle, one of the dogs bit her on her left forearm. The officer discharged her firearm missing the dog and stopping the attack. The dogs retreated to their yard.

The officer retreated to her vehicle taking a defensive position behind the driver’s door. The dogs approached the front of her vehicle before coming at her from the rear of the vehicle. The officer discharged her firearm striking one dog and the second dog ran away. One dog was deceased, and the second dog was taken into custody by animal control. The officer was transported to a local medical facility for treatment for the dog bite. Neither animal had a rabies vaccination. We are awaiting results of the rabies testing and quarantine. The investigation showed that the dogs had broken through gate of their enclosed backyard. The attack took place in the complainant’s / caller’s front yard and the roadway.