She's not a regular mom, she's a bee mom. 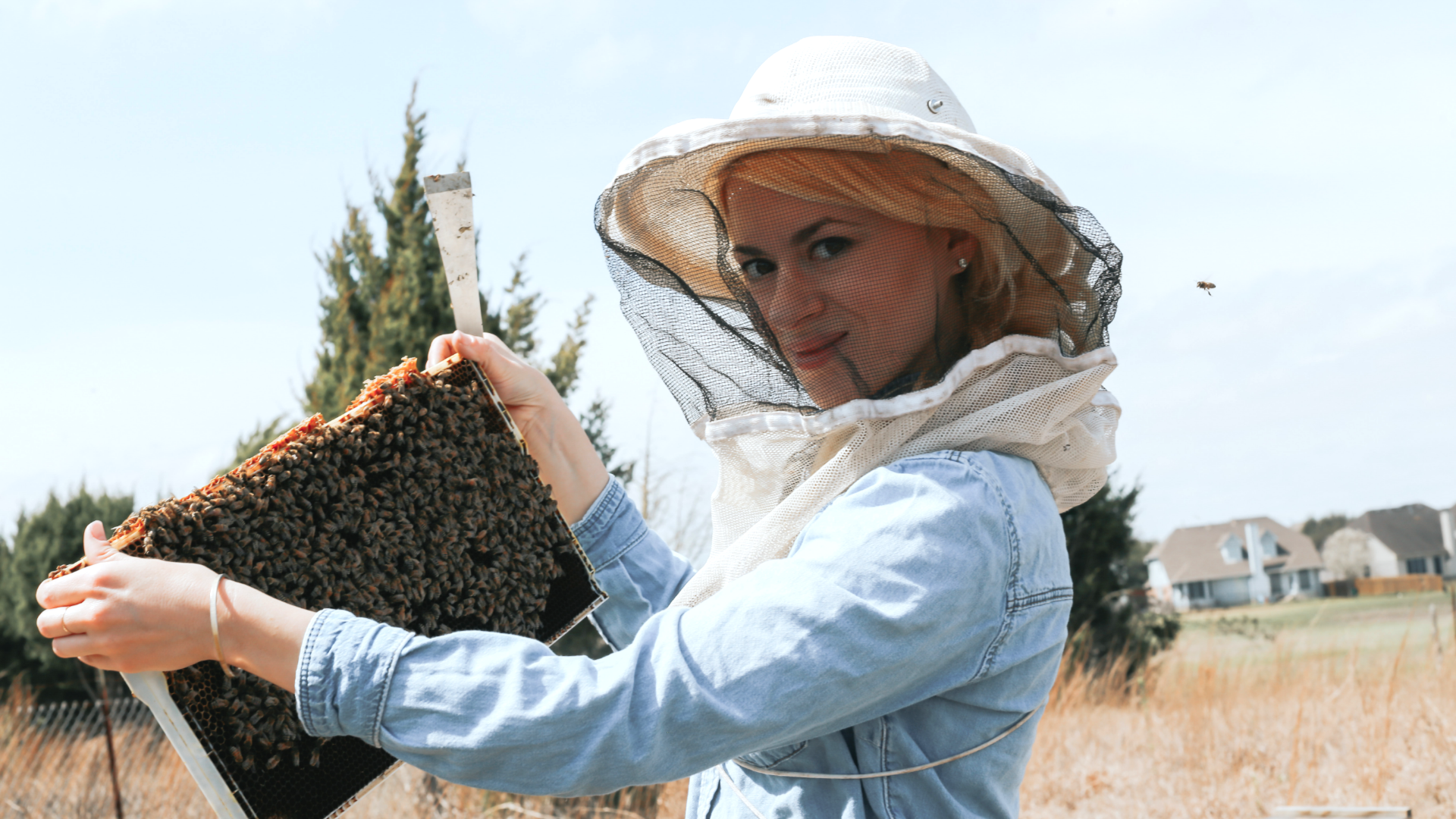 AUSTIN, Texas — When Erika Thompson discovered the world of bees, it didn't take her long to instantly become fascinated with them. Within nine years, Thompson created her own beekeeping business, Texas Beeworks, and quickly learned how to get that liquid gold.

Thompson has more than 100 hives across five counties in the Austin area. She said that works out to more than 5 million bees. You could say she's quite the expert.

Although the buzzin' insects are often feared, they are an important asset to the environment and even have a sweet side. Thompson gave KVUE's Rebecca Flores an inside look at what it's like tending to the black and yellow pollinators.

A day in the life of a beekeeper

Being the owner and founder of Texas Beeworks is no easy task, but the reward is sweeter than honey.

"I love my job! I'm the luckiest person in this world," Thompson said.

Equipped in a bee suit, gloves, boots and hat, we were ready to get our hands dirty on the job.

"I usually start by spraying the bees with a bee smoker," Thompson said.

The bee smoker helps mask alarm pheromones that are released by bees. This helps beekeepers open and work inside the beehives while the colony's defensive response is interrupted.

"I like to use all recycled or found materials in my smoker," Thompson said. "Things like cardboard egg cartons, burlap coffee bean bags generously donated by Cuvee coffee, pine needles, pine cones and even dryer lint are good to use."

This may sound fun and adventurous, but you will break a sweat tending to the bees, especially during the summer Texas heat.

After checking the hives, Thompson closes them up before heading to her other farms.

Thompson explained she visits each of her bee farms at least twice a month to make sure things are running smoothly, but tending to the hives isn't the only thing on her agenda.

Thompson said she is able to grow her bee colony with help from local homeowners who allow her to farm on their land. The homeowners also get a little something in return.

"Most of my business is centered around placing my beehives on landowners' properties so that they can qualify for an agricultural 'ag' exemption/valuation on their land and receive a significant reduction in property taxes," she said. "This is a great opportunity for property owners, but most importantly, it means there are more bees in more places all around Austin."

If you live in Central Texas and have between five and 20 acres of land, you could qualify for an ag exemption on your property taxes for having honeybees. Beekeepers like Thompson can place hives on their property and tend to them, allowing homeowners like yourself to apply for the exemption. Here's a step-by-step guide on how to apply for the ag exemption.

It's a phrase you hear often, but the meaning behind it is a loud reminder that we need bees in order to survive.

Although the honey is a sweet topping, Thompson said that's not why she's in the bee business.

"Hives before honey," she said. "We're in the business of helping bees. We focus on the health and wellness of the hive, and we manage every Texas Beeworks colony with the mission of maintaining a healthy honeybee population."

RELATED: Last winter saw more honeybees die off than ever before, survey reveals

Bees face many obstacles to stay alive, and the weather is one of them.

This past winter hit U.S. honeybees hard with the highest loss rate yet, according to an annual nationwide survey by the Bee Informed Partnership. About 37.7% of honeybee colonies died this past winter, nearly nine percentage points higher than the average winter loss.

According to Texas Parks and Wildlife, one out of every three bites of food we eat is directly the result of pollination, which includes bees, birds and bats. TPW added that honeybees can have major impacts to the populations of wild and native pollinators through direct competition and the introduction of pathogens.

According to the Pollinator.org, up to 95% of all flowering plants need help with pollination from pollinators like bees. They sustain our ecosystems and produce our natural resources by helping plants reproduce.

The pollinators are definitely something we need to "bee" thankful for and "bee" friendly to.

Let's end this story on a sweet note with a few interesting facts about the golden pollinators, courtesy of Texas Beeworks.

To learn more about bees, check out the Texas Beeworks website to see how you can get involved.

WATCH: A day in the life of an Austin beekeeper