The organization's mission is to promote marriage, gender, and human equality, but the scope of the message has grown. 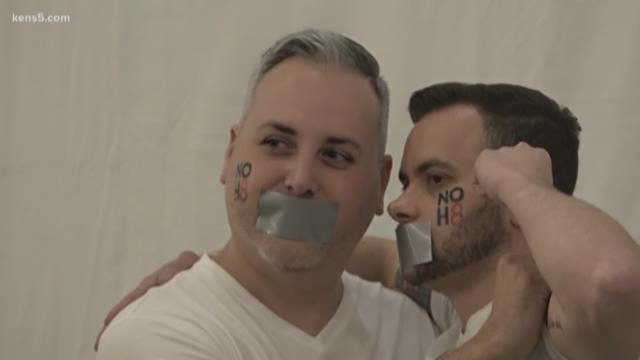 In a time when our country is troubled by hate and tragedy, San Antonians gathered Saturday for a powerful worldwide movement that includes duct-tape, three letters, and a number.

Hundreds showed up to Woodlawn Pointe to take part in the NOH8 photo shoot.

Mother-and-daughter Michelle and Cassie Drake said that they couldn't miss out on the opportunity.

"I think the negativity and the hatred just needs to go away," they said.

started 10 years ago in a living room by celeb photographers Adam Bouska and Jeff Parshley. The movement is now global, with nearly a million Twitter followers.

"It is humbling to see the community come out and support something that we just wanted a photo to speak-out against Proposition 8 at the time, and to have something for social media, and it has turned into something that is so much more," Parshley said.

The photos show people wearing a white shirt, duct tape over their mouth, and NO H8 on the side of their cheek. The organization's mission is to promote marriage, gender, and human equality, but the scope of the message has grown.

Fiesta Youth in San Antonio, an LGBTQ youth program, helped bring the NO H8 campaign to the Alamo City. Board Secretary David Laidacker said that it was truly special to have the campaign here.

"One of the great things about the NO H8 campaign is that it strives to show anti-bullying, ant-discrimination. And in the world we live in today, it even provides a bigger light to show the world that San Antonio is a NOH8 city," he said.

Even though Mayor Ron Nirenberg is on a business trip in Mexico, he snapped a photo to show his support for the campaign.

Despite recent data showing hate crimes are on the rise in the U.S, the Drakes believe our country is making positive progress.

"The tides are slowly turning, and it is one person at a time.”