Who can escape the room: 12 Today vs. the 12 News Night Team

You've probably seen those escape room challenges where a group of friends have one hour to find their way out of a room by answering riddles and solving puzzles. 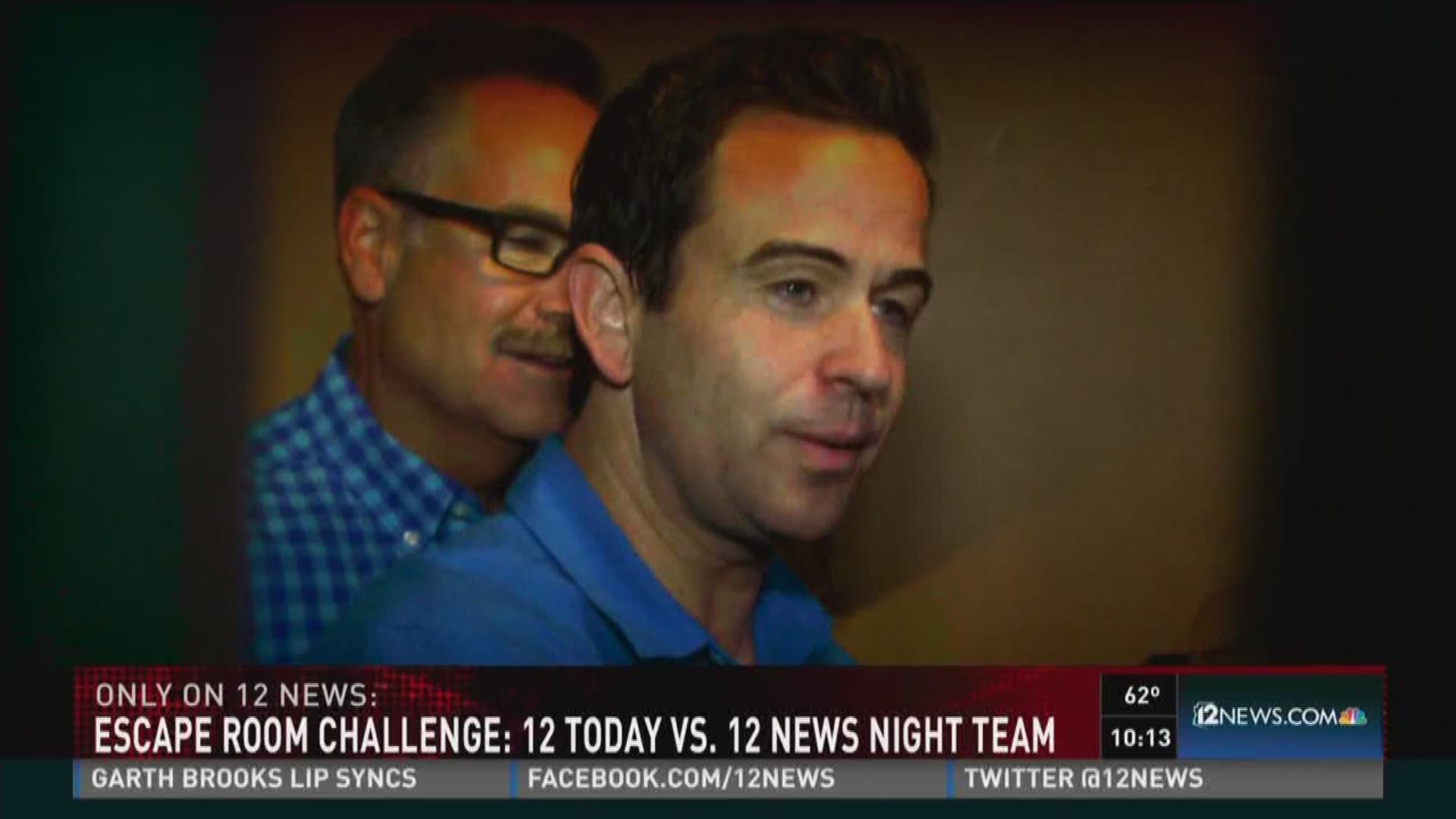 SCOTTSDALE, Ariz. - You find yourself and your friends in an unfamiliar room. There are no windows, and the only obvious exit is locked. You’ll need to use your surroundings, your fellow detainees and your ingenuity to escape.

That’s the concept behind a popular game known as an escape room challenge, where a group has one hour to find its way out of a room by answering riddles and solving puzzles.

Team 12’s morning and night teams went head-to-head at the PanIQ Room in Downtown Phoenix to see who could find their way out first. The morning team made it out with time to spare. The night team … not so much.

Here’s what they had to say about the experience. It might come in handy in case you were thinking of trying it out for yourself.

My advice is don’t overthink your predicament. We had a tendency to not look at the big picture, which would have helped our situation.

Overall, we had a blast … just hated that we couldn’t “get out” in time.

They say hindsight is 20/20, and that couldn’t be more true with this experience. I think my first mistake was my approach to “Escape the Room.” I was approaching it like someone “playing a game” as opposed to putting myself in the mindset of a fugitive trying to break out of jail by using crafty maneuvers. If I had been thinking about if from that viewpoint, I believe I would have seen the rope as a useful clue instead of just part of the set décor. That first room really deflated our morale. Once we made it to the third room, I felt we were on a roll. Unfortunately we had such little time left.

This kind of exercise forces you not just to answer complex questions, but to identify what the questions are supposed to be in the first place.

It challenges your ability to think creatively and logically at the same time.

Our team put up a good fight. Even though we didn't win, we had fun. If you take yourself too seriously in one of these things (and you don't do very well like us) it will drive you crazy! Being able to laugh at yourselves is important.

I know it sounds like I’m towing the company line here, but it was honestly a team effort. All four of us had at least one shining moment of brilliance.

We got off to a slow start, but once we started to figure out the unwritten ‘rules’ of the room, we never got stuck for too long again. Every item in every room seemed to have a purpose; there were no red herrings.

Some of the puzzles could be done individually, but we learned we expedite our escape by doing them together. Without giving away any secrets of the room, let’s just say it’s designed to reward team work.

I would do it again in a second. And I think now that we know how these things work, we’d finish even more quickly.

To be honest, I didn’t have a lot of faith in our team going into the challenge. We’re new, we are all SUPER different, and while we really love each other, I wasn’t sure how well we would combine our differences and work together.

As soon as we started we just clicked. Each of us went into different roles finding different clues, making sense of them and progressing enough each phase. It was frustrating, hilarious, fun, exhilarating and exhausting. I remember the time ticking down thinking, “Oh my gosh, we’re really going to complete this!” I was so proud of our group. I still am so proud. We worked together in such a great way and completed so many intricate challenges ... made me feel like this team can do anything!

I did not even know what an escape room was when I started. Then was unbelievably blown away by the team work of the morning crew. I felt like I won a team championship when we finally made it out of there with time to spare! I am so proud of my team!