Could you survive Jason? Real-life horror game puts you against the infamous 'Friday the 13th' killer

A group in Arizona created the 'F13: Survive Jason' game, which gives players a real horror scenario to escape all while being hunted by Jason Voorhees. 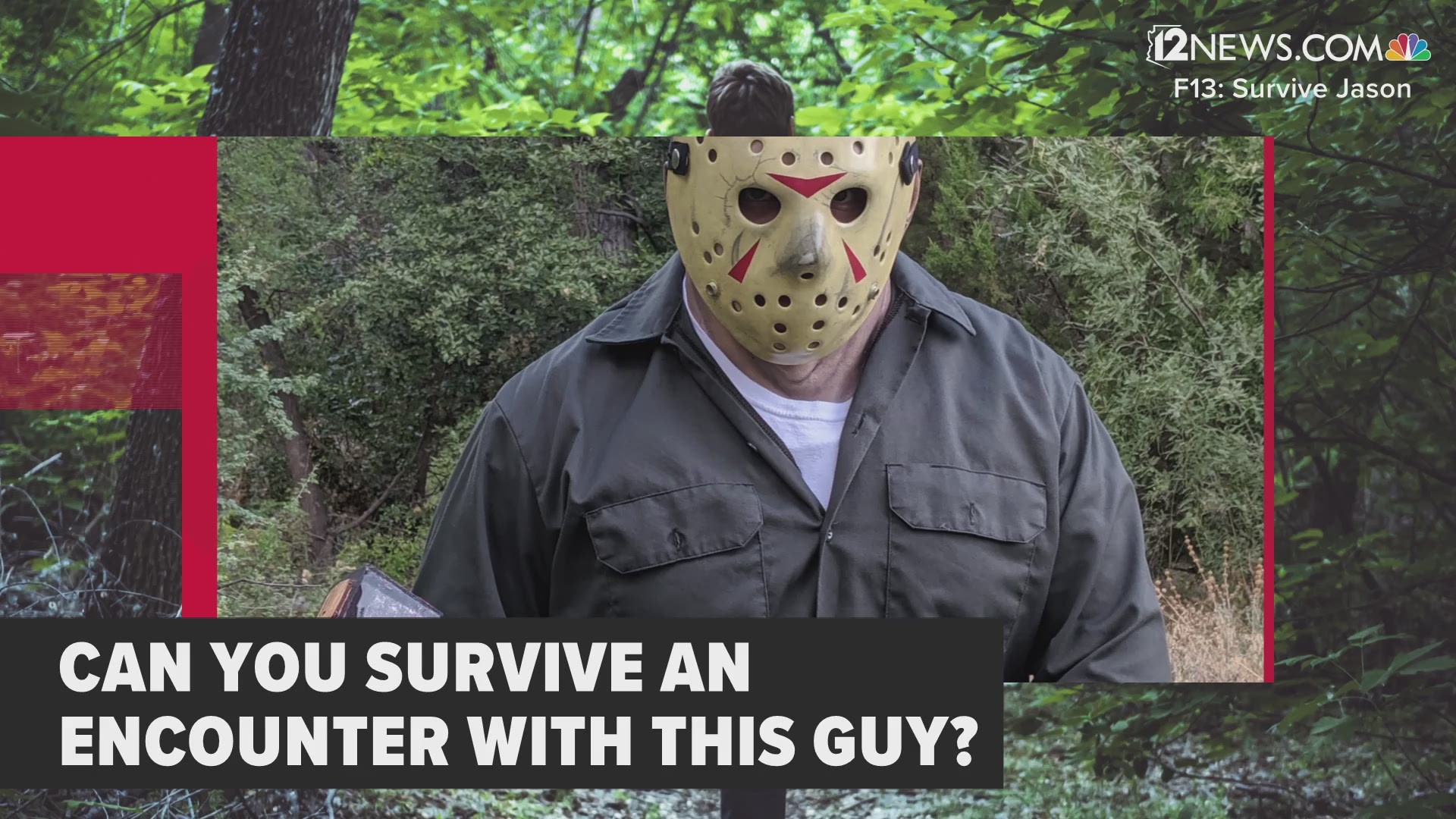 We've all been there, right? Watching a slasher film screaming at the screen telling one of the characters, "No! Don't go in there!" Only for them to go in "there" and get chopped to pieces by the movie's killer seconds later. Some of us have probably thought it at least.

A group in Arizona is putting horror fans to the ultimate test with a game that was born from that very scenario and those who actually think they could survive if they ever found themselves in a horror movie.

Maggie Mater is the founder of On Pins and Needles and the F13: Survive Jason game, which puts a group of people against the infamous mass murderer Jason Voorhees in a real-life scenario. The goal, of course, is to survive.

Mater, a fan of horror movies, says she and her friend Jennifer were discussing the concept of being able to survive scary movie situations.

"I said that it would be amazing to try this out in real life, get people to put their money where their mouth is," Mater said.

Her friend suggested they make something they could play and F13: Survive Jason was born right here in Arizona.

How is the game played?

Mater said it works like an outdoor escape room. A group of eight players, who may work in pairs or solo, attempt to solve one of three puzzles in order to escape. But they have to do it all while avoiding being "killed" by an actor playing Jason. Each game runs for around 25 minutes.

RELATED: Who can escape the room: 12 Today vs. the 12 News Night Team

"If players are still alive at the end, we go into a 10 minute overtime where the play area shrinks, and extra weapons are added, either to help or hinder the players," Mater said.

Each player will get a T-shirt that shows whether they were a survivor or a victim. If you survive the game you'll win a prize.

"Every game is a little different, from the intro to puzzles to the overtime," Mater said.

What can I expect if I play?

The game takes place at night. Mater said each player is equipped with safety goggles, flashlights, and glowsticks. Players must be at least 18 years old.

"We try to keep everyone's safety a primary concern, from our players to our actors," Mater said.

The glowsticks are used if a player or an actor has to stop playing whether that's because of fatigue, an injury or they're just too scared.

"They snap their glowstick and play stops for that person, and one of our team will escort them back to the home base area," Mater said.

And don't worry, Jason isn't wielding an actual machete. Foam weapons are used during the game and Mater said there are specific rules when it comes to using or hitting with those foam weapons.

As for the puzzles, Mater said some do require logic so you'll have to really think to solve them while avoiding being "killed."

"Our Jason actors generally move according to their character type, which can be fast, so be prepared to move and think quickly," Mater said.

Mater said they have a team that is on the perimeter around to play area making sure rules are followed and to watch for anyone who may need assistance.

"While the horror world can be wild, we take everyone's safety seriously, and expect all rules to be adhered to at all times," Mater said. "Anyone who doesn't, will get the axe... and evicted."

Planning such a 'killer' game

The game has been held at a few different locations around Arizona including Tortilla Flat and most recently in Cordes Lakes on Sept. 13.

Mater said the game is based a lot on what they want to see and feedback from those who have already played the game. The "F13: Survive Jason" team looks at everything from play space, puzzle difficulty, game length and a player's overall experience.

Her business partner makes all of the costumes, the team's artist designs the shirts and logos and they scout horror con events to find "great prizes," Mater said.

"Since we don't want repeat players to have the same story every time, we work to tweak each game so it has a surprise factor each time," Mater said.

The next event scheduled on the game's Facebook page is September 28 in Cordes Lakes. But unfortunately, that game is sold out and so are October events.

But Mater said they plan to make this game a year-round event and maybe even venture outside Arizona after receiving "multiple requests" to travel to other states. It's part of their end goal, at least.

"We feel that if the niche is there, we want to cater to that niche," Mater said.

The game's Facebook page shows the team will soon be working on events for November and December. For more information on future events, you can visit the F13: Survive Jason Facebook page.

Mater said the people, from the actors to fans, in the horror genre, are some of the nicest people out there.

RELATED: You can get paid $1,300 if you watch 13 Stephen King movies by Halloween

And at the end of the day, F13: Survive Jason is a game that gives fans the chance to test their horror movie knowledge and prove themselves in a safe, real-world horror-movie survival scenario.

"It's also a chance to get killed by a machete wielding maniac but still get some s'mores afterward," Mater said.