New exhibit features 'Women and Activism on the Westside' 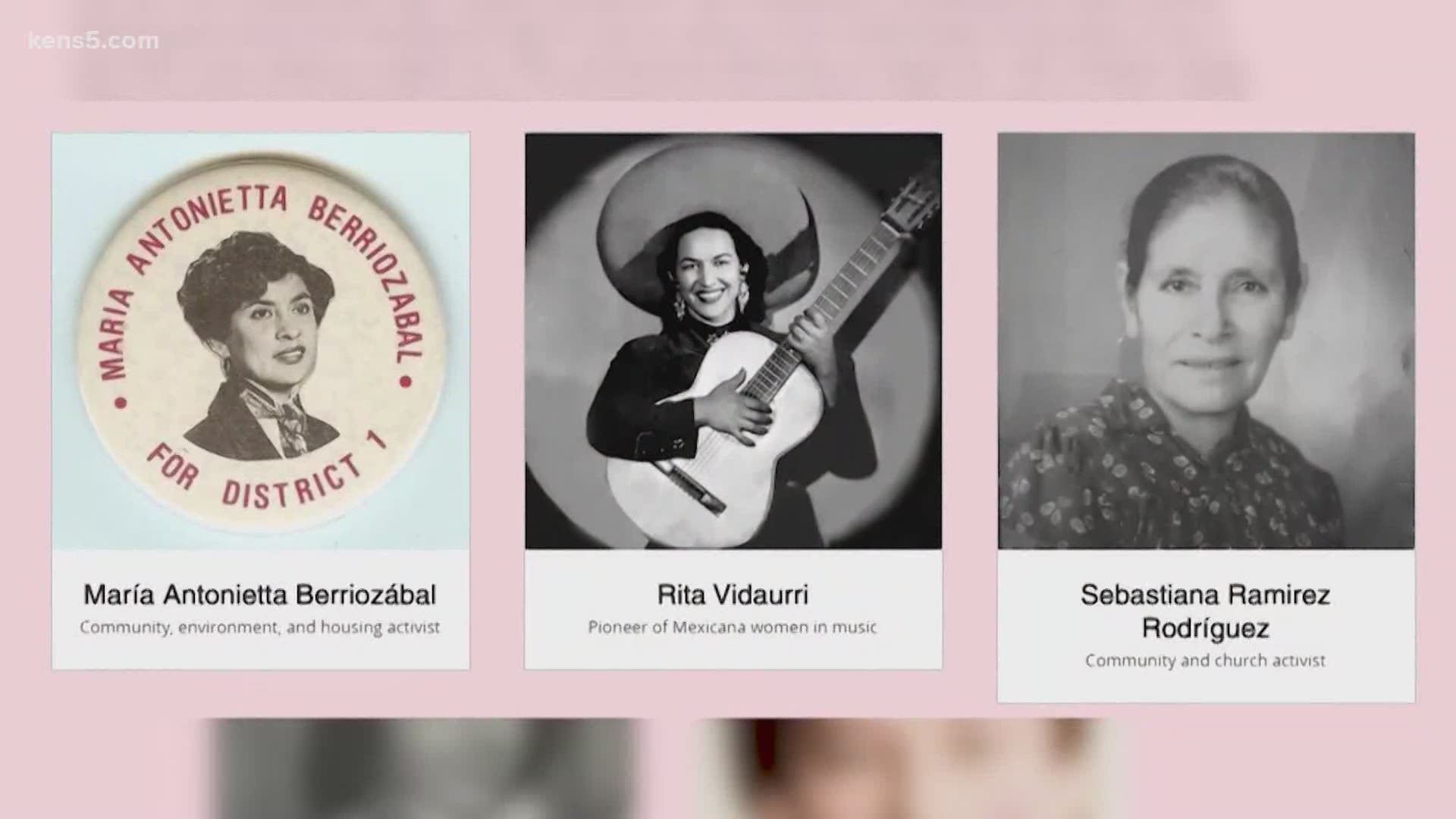 SAN ANTONIO — A new exhibit telling the stories of 'Women and Activism on San Antonio's Westside' aims to offer an inclusive, holistic picture of the roles women have played in supporting their communities and promoting dignity in a variety of ways: from the picket line, to city council chambers, to serving on Parent-Teacher-Associations and in their neighborhoods.

The Esperanza Peace and Justice center is coordinating the creation of a physical Museo del Westside in the old Ruben's Ice House building near Colorado and Guadalupe. Because of the pandemic, they're first launching the exhibit virtually; with time, the plan is to also have it in physical form.

The goal, as curators describe it, is to pay tribute to "our amigas, hermanas, madres, y abuelas who have have acted out of love for their barrios, vecinos, y patrias – who have shown commitment to preserving human dignity through canciones, protests, petitions, church groups, escritos, and in political office."

Donna Guerra, a professional archivist of 21 years who serves as a member of the Advisory Board for the Museo del Westside,a member of the Westside Preservation Alliance and a Buena Gente of the Esperanza Peace and Justice Center, says it aims to open up a conversation about the roles women have played, and continue to play,

"Because of the broad brush we’re using to define activism, most people think, you’ve gotta be marching in the street, holding political office, something like that," Guerra said. "Our idea of it is that it is much more the meaningfulness of grassroots activity. Being impactful- in the PTA, for example.

It kind of re-conceptualizes what we view as activism, and what making a difference is. We say it could be your mother, your tia, your abuela, your cousin – a female. So to think in those terms."

Esperanza Peace and Justice Center Director Graciela Sanchez says it aims to give a voice to many stories that have, historically, not been heard.

"The people that move this world, I believe, are women and girls and yet our histories are totally erased, so that’s the point of this museum," Sanchez said. "They’re not doing it for glory, they’re not doing it for fame- they’re doing it because the community matters, the family matters, the world matters. It’s not because of fame, fortune or money- it’s because of love and humanity and that’s why we do it."

Sanchez submitted her own mother -- now 97-years-old -- hoping to tell the story of her life that many who meet her now may not know.

"People just see her nowadays as a little old woman and she’s cute, and being cute’s okay, but this woman was my role model," Sanchez said. "She was out there when I was in elementary and junior high school, advocating for the children of the neighborhood. You have me, your brothers and sisters have me, but so many people in this neighborhood have no one, and I am going to represent them. And she was an advocate all her life."

She says she hopes other San Antonians will come forward to share stories of the women in their lives- and she plans to share more of hers, too.

"There are stories of my grandmother and great-grandmother that I will write later because they were the role models of my mother, and they were the ones knocking on doors asking to see electricity and water and sewage and payment take place," Sanchez said.

Laura Hernandez-Ehrisman, author of Inventing the Fiesta City: Heritage and Carnival in San Antonio and a cultural historian with a PhD in American Studies from the University of Texas at Austin, says curating stories and images for the exhibit was a unique process- and unearthed momentos the public likely hasn't seen before.

"There are some materials here that aren’t in any archive, until this one – so these are scrapbooks, these are photos that are just in peoples’ family homes, we are highlighting some pieces that are collected in various archives in the city," Hernandez-Ehrisman said. "Highlighting what’s been there, but bringing it into a public forum. I think that’s another important element- making it accessible. It’s really vital. And one of the things I was noticing is that – partly because women tend to be really shut out of political office or things like that, the way that women have engaged has been in ways that are; well, this woman started a Spanish-speaking PTA, and then she started this organization, and she was part of LULAC- some of these women are just doing all sorts of things that cross the boundaries of what we think of as activism.

Sharing those full stories- and the fullness of these women’s lives- is being showcased in this exhibit."

"To place Jovita and Emma Tenayuca, the well known ones, the superstars, and the more local ones, Maria Berriozábal, all really have been visible throughout the years – with the other women that are less well-known, I think it’s really important that the exhibit contextualizes them all together," Guerra said. "It conveys a really important sense of, well, the Westside, what it means to come from there. We can all be impactful. When we talk about the definition of an activist, part of the definition is intentionality and so we can all be intentional. It doesn’t matter your status or where you’ve arrived. People on the Westside have been impactful, we just haven’t heard about it yet. And I’m sure there are men that have been impactful, but you tend to hear about the men more."

Though the exhibit is an ongoing creation, Museo del Westside curators timed its launch to mark the centennial of the 19th Amendment, noting that although that measure declared the right to vote could not be denied on the basis of sex, it did not guarantee voting access for all women.

"We wanted to talk about this 100th anniversary of the 19th amendment but also tell a more inclusive story," Hernandez-Ehrisman said. "Because a lot of women did not really benefit from the ratification of that amendment. So to tell the story of women’s activism in the Westside means talking about the broader array of engaging with the community and defining activism really broadly."

It's one example of how the Westside exhibit aims to to tell an inclusive story highlighting women activists in the Westside- from women who participated in strikes for better working conditions to those who made sure children in their neighborhoods were cared for.

To share the story of a woman activist with ties to the Westside, email museo@esperanzacenter.org or call 210-228-0201.