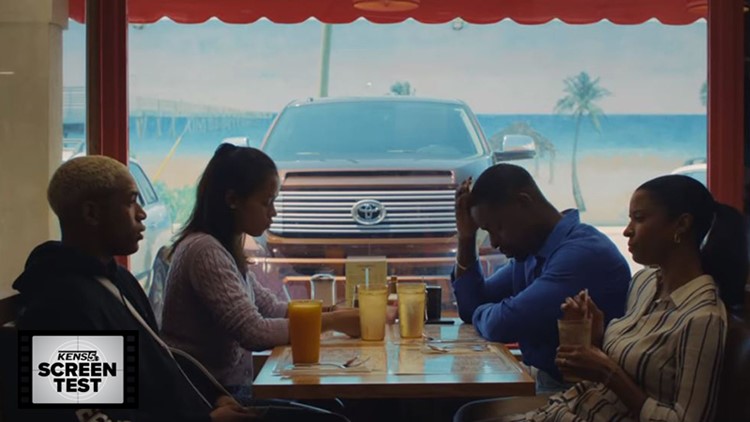 'Waves' Review: A24's new family drama will shatter you, and help put you back together

Trey Edward Shults is allegedly the director of the new A24 drama “Waves,” yet it’s impossible to imagine anyone “directing” this intensely naturalistic movie – the year’s most unbearably honest – in which storytelling agendas takes a backseat to the mysterious, often-dizzying pulse of life itself.

For those who go to the movies seeking temporary escapes from reality, “Waves” will perplex: There’s no place for traditional structure or plotting in its observations of an ostensibly ordinary black American family. Consequences and implications stretch far, far beyond its 135 minutes. And the most easily-discernible decision by Shults in guiding the movie’s events – the thing I found myself responding to with shifting loyalty before giving in during the film’s sublime final half-hour – is a complete submission to the idea that the movie’s events should actually guide him. That experimental nature, at first, feels like it limits “Waves.” Then it becomes the air under its magical wings, lifting it into something wondrous in its universality—and into the upper echelons of 2019's most memorable movie-going experiences.

“Waves” anchors its start on high school teen Tyler Williams (a stunning, go-for-broke Kelvin Harrison Jr.), though nothing about our meeting him is anchored, really. We’re lurched into the frenetic pace of life as a 17 or 18-year-old in the social media age, cinematographer Drew Daniels matching the seductive thrum-thrum-thrumming of Tame Impala with a camera that spins through cars and classrooms and adolescent impulse with such boundless energy that you may not want to eat lunch 30 minutes beforehand. Whirlwind images of wrestling practice, meeting his girlfriend’s eyes, scream-singing in a car on the highway with eyes everywhere but the road—we’re not just watching Tyler experience life. “Waves” insists we experience it with him, by forcing a bottle of cinematic Adderall down our throats. Motion and sound conspire to drown us at movie’s start – close your eyes in the first five minutes, you’ll think you’re at a concert – and it’s off-puttingly immersive. Isn’t cinema supposed to ease us into things, allow us to settle into our seats? Not so here. Because when did anything about high school life ever make you feel settled? There’s a beautiful tension and a tense beauty we have to adjust to, lest we get left behind.

Daniels’s camera (and us) is finally allowed a breath when Tyler is at home; being with family is always a bit more mundane after all. Say hi to Ronald, father (Sterling K. Brown, with immediate and foreboding presence); Catharine, stepmom (Renée Elise Goldsberry); and Emily, younger sister (Taylor Russell, the movie’s spirit lying in wait). Glimpses of familial tension connect us to parcels of information that Shults offers about these lives, but don’t expect his screenplay to serve you with explanations charting the movie’s course. This is a collection of experiences he invites us into—the more the movie goes on, the more divine it all feels.

There’s nothing mechanical about these performances or events – Tyler dozing off at church, Tyler working out with his dad, Tyler chanting “I cannot be taken down, I am new machine” with his teammates – and it often makes “Waves” feel like documentary; as if subjects are unaware they’re being filmed. So strong is the connection between the movie’s shamelessly confident aesthetic and Tyler’s mind that we’re able to glean everything we need to know about the young man through the movie’s unambiguous visual style and carefree attitude in these early scenes. But what informs us is also what limits us—and aside from a dad constantly looking for opportunities to test him, Tyler doesn’t know how horrible life is about to get.

His circumstances shift with bad decisions that initially feel tangential, pushed to the borders of “Waves” because Tyler puts them there. Shults is so good in his latest directorial effort at making us think we know what is and isn’t of concern. But consequences eventually arrive, with the eerily familiar force that shatters the fantasy of permanence that tends to be a trait of teenagerdom. Doctor’s offices are visited, as are abortion clinics, as are the questioning of romantic relationships.

Tyler makes just about every bad decision he can – Kendrick and Kanye and another masterfully discordant Trent Reznor/Atticus Ross accentuating every one – while being driven only by his feelings. Imagine the social anxiety Bo Burnham so acutely created last year with “Eighth Grade,” and shape those to the apocalyptic fallouts of high school choices. So devoted is “Waves” to shape-shifting to what’s transpiring on-screen (literally shifting the aspect ratio at times) that it eventually takes on the visage of a horror – the visual palette suddenly knowing nothing beyond neon reds, strobing whites and shadows – because that’s what Tyler’s life eventually becomes. Shults is uber-effective at drawing out the finality of things that dominate our teenage existence, and “Waves” – a movie driven not just by emotions, but by their hold over our relationships – becomes a maelstrom of moods when Tyler’s life as he knows it becomes a blend of rage, confusion and selfishness.

It’s a testament to how grandiose “Waves” feels through its first half that I mistook the second for a coda. A shift in perspective to Emily returns the movie to less turbulent waters, but waters that are still constantly rippling due to what’s come before. Shults’s pathos-driven storytelling never relinquishes control; the relationship that slowly blooms from a meet-cute between Emily and schoolmate Luke (Lucas Hedges, adorably awkward and stuttery) feels like it’s headed towards inevitably bleak conclusions. Because, surely, we know better by now. And hasn’t Shults put us through enough turmoil?

Casting director Avy Kaufman, whose fingerprints are over several of this fall's films, should be commended here; the family at the heart of “Waves” feels plucked from reality, thanks in no small part to each incredible performance. (Trey Edward Shults told The Ringer's Sean Fennessey the cast didn't meet until the day before shooting, making the product all a bit more miraculous.) But as Ronald, Brown – in a performance that slowly morphs from leader-of-the-pack fortitude to strained vulnerability – does the most to explicitly voice the urges we have for the Williams clan. By the time we’ve seen how an inability to confide and connect with others dooms us, Ronald’s desperate attempts to keep his family pushing forward together becomes the stuff of unavoidable heartbreak. The actor does just enough to show how Brown, the one we’ve come to recognize as most in control, doesn’t quite have everything under control. Generational divides between child and parent ring achingly true in their portrayal. There’s no stopping the tide of life—there’s only trying to stay upright in it.

It’s difficult to imagine movies being more malleable than “Waves.” Consistency of tone holds no importance for what Shults is doing, making it a literal mess at times of incongruent colors and styles. It all feels deliberate—Shults is making as bold an attempt to get at the heart of life as any movie in recent memory, so it has to be messy. “Waves” doesn’t make the mistake of thinking it has answers for fixing shattered families, and that not-knowing brings its search for them down to the viewer’s level in overwhelmingly intimate ways. Cinema rarely feels as penetrating as “Waves” does in its startlingly human final moments. Mind you, there’s no resolution; creating that extends to us. I imagine that, for most people, that comes in the form of a call to mom or dad immediately upon leaving the theater.

It’s certainly not the most successful attempt at getting to what makes us human. But it’s the recognition of precisely that that may make “Waves” a more authentic one.

"Waves" releases in San Antonio Dec. 6, and is rated R for language throughout, drug and alcohol use, some sexual content, and brief violence - all involving teens

RELATED: 'Knives Out' Review: Rian Johnson's clever, caustic whodunnit rips into the uber-entitled as it subverts a classic genre