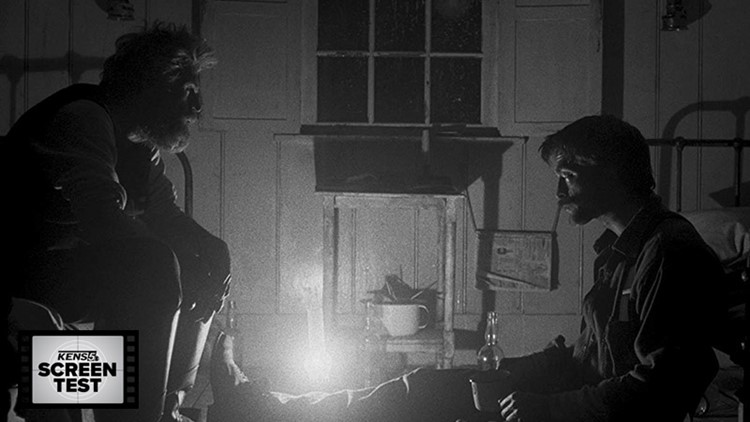 Often the centerpiece of colorful postcards, snowglobes and Instagram aesthetics, you wouldn’t inherently imagine lighthouses as a stage for psychological anarchy. Not so in the mind of Robert Eggers, the director of 2017’s dazzlingly meticulous “The Witch” returning with another plunge into isolated hysteria—this time making victims out of the insatiable pairing of Willem Dafoe and Robert Pattinson’s lighthouse keepers, Thomas Wake and Ephraim Winslow, against a colorless canvas of charcoal, lead and oil.

Eggers’s “The Lighthouse” solidifies much of what apparently interests the sadist-as-filmmaker – dubious wildlife, a rigid devotion to atmosphere, seeking the realistic in the outrageous, unsettling the hell out of his audience – and what interests him makes for a fascinating rejiggering of the horror genre’s capacity to mesmerize. His second movie is a smirk that slowly and uneasily morphs into a diabolical grin, all while stretching Dafoe and Pattinson to their wits’ ends within the constraints of a 4:3 aspect ratio. It’s bonkers, constantly high on itself and inarguably one of the year’s most memorable watches. Especially when you can’t bear watching any more.

It also proves the malleability of Eggers’s style. “The Witch” was more period drama than outright horror—its most tangible form of evil, a naked hag who mortar-and-pestles a kidnapped baby to death in the first 15 minutes, was tangential to the central family paranoia-ing itself into the submission of the woods surrounding them (and to a certain now-iconic goat). “The Lighthouse” fits the genre’s mainstream parameters to an even lesser extent. Like his debut, Eggers holds no allegiances to the audience; his goal is incredulousness, his drive unrelenting.

He once again displays a startling level of acuity – like a sixth sense – in knowing exactly when, and how, to shatter whatever barriers of comfort we talk ourselves into believing the screen in front of us represents. But this time around, it is seldom with morbid dread, and less so unmasked devil-among-us tension.

Where “The Witch” reveled in suspicion, “The Lighthouse” luxuriates in the ambiguous, marinating the edges of reality with the salty mystery of seafaring mythology. When Ephraim isn’t bickering with cocksure seagulls nor Thomas getting strangely intimate with the light they’re guarding, the wrath of the seven seas is being volleyed between them via drunken provocations typically followed up by immediate repentance. You never know if Poseidon himself will make an appearance, but the possibility never withers; Eggers has graduated from confronting the unknown with reservation to embracing it wholeheartedly, and with a darkly humorous glee. What’s sacred in “The Lighthouse” is also what is perilous, and the divine is often rooted in the unconscionable.

The director here continues his collaboration with cinematographer Jarin Blaschke, and the duo’s obsession at creating unease often leads to the camera holding static on specific shots for what feels like days longer than we can comfortably manage. Even when the movie proffers a fleeting bit of outrageous imagery – explicit weirdness we hope we can use to justify the insanity that is only implied before the movie reaches drunken levels of delirium – there’s never truly a way of knowing if it was real or an effect of the mind as we are overtaken by the same wave of madness as our lighthouse keepers.

The keystone of what makes this second feature an experience worth having, despite the fact some moviegoers are sure to view its ultra-refined direction as nonsensical crudeness, is one-part Eggers’s screenplay – with which he shares writing credit with his brother, Max – and one-part the dynamo performances of the only two humans at the movie’s center. As the “The Lighthouse” increasingly resembles an experience where everything is worth questioning, the greater the degree to which Eggers erases any possibility that Thomas and Ephraim can be looked to for a hint.

Not that Dafoe and Pattinson don’t look like they’re trying. The movie reveals both everything we should know about them and nothing at all. That is, they have no relationship before landing on this scraggly piece of rock, but their individual pasts – Dafoe’s Thomas as someone whose apprentices have lost their minds, Pattinson’s Ephraim as a “timber man” on the run from…something – may as well be apparitions. Motivations, ambitions, suspicions—they’re stumbling around the dark searching for them in the eyes of the other, unsure if there’s anything even in there.

And neither are we. What Eggers has managed to do is place us on the same playing field as his protagonists; we never know what’s really happening, and it’s at the same bewildering frequency as the people these things are happening to.

The only sure thing we can go off of is here are two men occupied only with work and each other who are ostensibly separated by a difference in authority, and mysterious recent pasts. Movies have taught us that those hierarchical characteristics are one-in-the-same with superiority, and Eggers is having none of it, smashing the preconception – held by ourselves and his ill-fated landlubbers, perpetuated by the inexplicable attraction to whatever salvation is stored in the lighthouse’s heavens – with the force of two men losing their minds together, dispensing of their flimsy facades in masculine construction.

In “The Witch,” madness seeped in from the woods around a Puritan family. In “The Lighthouse,” it comes from within, filling the tiny rooms that Thomas and Ephraim work, sleep and piss in with a wildness that the constantly-blaring horn is counting down to.

Dafoe and Pattinson indeed go mad with an apocalyptic fervor. I cannot recall a movie this year in which its two actors feed off each other to such a ferocious degree. They both tap into something that’s almost atavistically America, imbue it with the hysterical effects of cabin fever and use it as a weapon of desperation at outdoing each other in a psychological game neither of them know the rules.

Iconic performances and immaculate stage production aside, “The Lighthouse” is proof that in an age when most movies are spoiled before you reach the theater, there can still be those wholly impossible to prepare yourself for. Between Jordan Peele (“Us”), Ari Aster (“Midsommar”) and now Eggers’s blend of deathly machismo, 2019 has been a riot for young horror auteurs taking command of the genre with wholly original visions, making the next decade look that much brighter (and bloodier) with their bleakly glorious stories.

So long as no nefarious seabirds stand in our way.