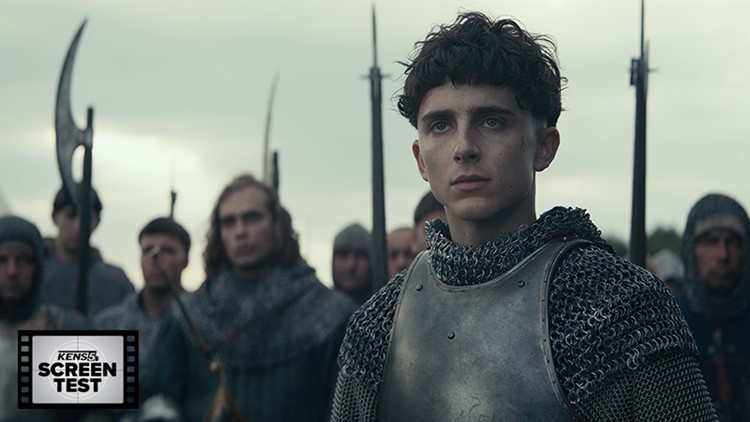 Following the tempo of the brooding masculine personalities at its center, David Michôd’s “The King” is 140 minutes of purposeful mundanity; a movie about the façade of rightful rule, rooted both in Shakespearean works and in history, with a cinematic pulse that rarely quickens to the level we’d expect of sword-and-chainmail epics. Betrayals, battles, duels, triumphs, death—Michôd’s movie takes on all of it, but with an attitude so straight-faced that you could mistake it for a lack of interest.

As sure as I am that I’ll forget about “The King” by next week, I don’t think Michôd is uninterested in the story of King Henry V’s rise so much as his desire to subvert genre norms – the stuff of rousing speeches and emotional crescendos topped with brutal acts of violence – overwhelms anything that is particularly memorable about his new Netflix movie. There’s a reason Mel Gibson’s guttural “FREEEDOMMMMM” scream has endured; for better or worse, Michôd doesn’t intend to have any part in creating that same thrill of high-stakes drama, where the results become the stuff of myth, within the movie and without.

His movie – which he wrote in collaboration with Joel Edgerton, who also has a role in the film – is instead trying to be more poignant in nature, if poignancy could be equated with grimy battlefields and the occasional beheading.

“The King” begins in wartime. As the sun rises over remnants of a clash in which England has emerged victorious, Adam Arkapaw’s camera wanders over a scene that could be called serene if not for the bodies littering the ground. Lone soldiers roam around in a daze, extinguishing final breaths with plunges of their swords. War may be hell, but it’s clear that in this iteration of 15th-century Europe, Michôd is intent on showing that war is an omnipresent hell; there’s no time to savor survival.

That lesson will soon be learned by Timothée Chalamet’s Hal, whose initial reluctance to succeed his dying father as king gives way to duty when the war he began leads to the death of his brother in battle.

As Hal – who in the span of about 15 minutes goes from lazy drunkard to King Henry V, ruler of the land – Chalamet gives a tenaciously, almost frustratingly understated performance, a physical embodiment of Michôd’s tranquil sense of direction. And while the role is clearly unlike anything he’s taken on before, it’s just as clear from early on that “The King” is an apt showcase for Chalamet’s atavistic physicality—his starved lankiness mirrors the absence of regal prosperity in “The King,” the massive bags under his eyes fitting for the sleepless position he’s vowed to take on.

Nothing about his turn, though, is more apt for “The King” than his soft voice. It doesn’t matter if he’s making a threat, an offer or a plea; Chalamet’s whispers, ruptured only occasionally by rage that has slipped through his firm countenance, have a sort of fragile confidence that harmonizes more with the themes of Michôd’s story the more those themes become clear.

Hal barely begins to warm the throne as King Henry V when he must suddenly reconcile his desire to preside over a peaceful land – a desire his father didn’t share – with clear and present provocations from France, in the form of a would-be assassin and the gift of a simple ball when other nations have welcomed the new ruler with ornate goblets and fanciful trinkets. Before it seems like he’s had the new gig for even a week, he is convinced by his advisors that peace can never exist when France is seemingly prodding the king into conflict, and he submits to amassing his forces and setting sail towards something he swore to avoid.

“The King” is a brooding piece of atmospheric work, one which Arkapaw drenches in somber shadows, as if already cementing the fates of its characters as grim ones. So it’s a minor miracle that the movie itself is never a slog. Edgerton and Michôd are diligent in restraining themselves from complicating matters with overlong bits of exposition, yet once you realize nearly two-and-a-half hours have gone by when the credits roll, you almost wonder where all the time has gone. It’s largely thanks to a pervasive score from the Oscar-nominated Nicholas Britell that individuals scenes feel seamlessly stitched together. It is, by far, the element of the movie that indulges the most in its period and aesthetic, doubling as a disguise for how straightforward the plot of “The King” actually is.

Meanwhile, the last of Robert Pattinson’s three major 2019 roles is vastly different from his paranoid lighthouse keeper or pensive space castaway. His charisma – gushing over in every second of his limited role as the French prince establishing himself as King Henry’s foe – is an exercise in one actor choosing to gleefully break out of a movie’s low-key contours. If Chalamet speaks softly and carries a big stick, Pattinson’s Dauphin yells boastfully, and carries the movie into more interesting territory.

Scenes of war – the preparation, the carnage, the fallout – are depicted as such matter-of-fact images in the world of “The King” that you’re almost startled to life when massive trebuchets begin hurtling hellfire at castle walls. There is ostensibly little fanfare getting to this point – like Darth Vader striding in to silence instead of “Imperial March” – something the movie itself makes explicit note of. “War is bloody and soulless,” says Edgerton’s Falstaff at one point, and “The King” seems to take that to heart.

But if Michôd wants to hammer home the meaninglessness of it all, he does so bluntly. His juxtaposition of uneasily calm direction with scenes of violence doesn’t have the discomforting effect that it should, and when the movie bisects an exhilarating battle sequences with a tone that is strangely hallucinatory – dreamy, even – you find yourself wishing he would go all in, for once, on the brutality his story calls for.

"The King" is available on Netflix now, and is rated R for some strong violence and language.

RELATED: Review: 'Lucy in the Sky' is a miscalculated disaster of an astronaut drama