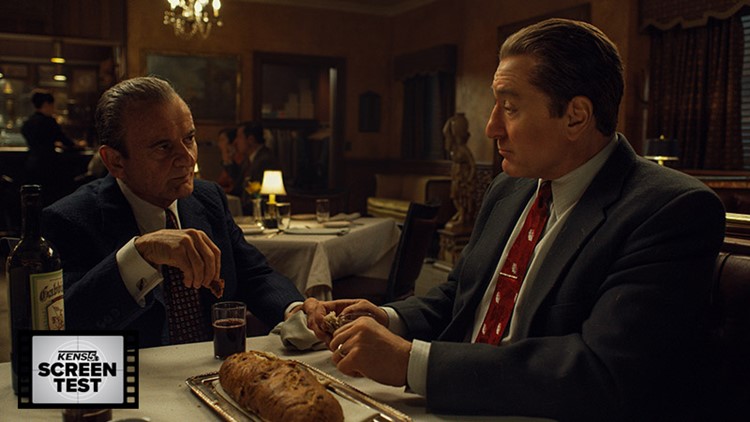 'The Irishman' Review: Scorsese's crime epic is a sobering account of gangsters and impermanence

“The Irishman” might be the year’s most deceptive movie. Leave it to Martin Scorsese to continue surprising us as he enters his seventh decade bending the rules of American cinema.

This time, he does it by bending over his own oeuvre, turning a kinetic piece of bloody moviemaking into a sobering meditation of impermanence while reflecting on how the kind of gangster movie he helped popularize is absorbed by 2019 audiences—showing, in the process, that he remains one step ahead of them, even if he’s misunderstood as the product of a bygone era where movies are “pictures” and cinema is still primarily driven by individual artistry.

Featuring the enticing trio of Al Pacino, Robert De Niro and the long-missed Joe Pesci returning to the kind of awards-worthy roles that helped them dominate the second half of the last century, “The Irishman” feels like a melding of Scorsese’s last two narrative features, which is a hell of a trick considering the explosive “The Wolf of Wall Street” and achingly ruminative “Silence” couldn’t be more different. But the director – working off a script by industry titan Steven Zaillian, who won an Oscar for “Schindler’s List” – makes the juxtaposition of styles his method and his meaning. “The Irishman” is both Scorsese providing exactly the high-precision filmmaking we expect of him – a simply tracking shot of a slow-moving car is filled with more graceful tension than most modern thrillers –and also what feels like the thesis of a legacy, and of a career matched by scant few American filmmakers.

The movie centers on De Niro’s Frank Sheeran, whose time as a hitman and mobster eventually overlaps with Pacino’s Jimmy Hoffa, the big-time union boss who “The Irishman” explicitly suggests the young people in the crowd won’t recognize, by way of Pesci, whose performance as gangster Russell Bufalino is the movie’s quietest, and best. As in "GoodFellas," Scorsese frames the protagonist's foray into high-stakes, organized crime as a thing of chance, of being at the right place at the right time. Unlike "GoodFellas," it's a friendship that is the conduit, not a blind fascination with the stuff of mobs and offers that can't be refused. Frank and Russell's first encounter is founded purely on charity; it's the first sign that Scorsese's latest crime epic is his most tender.

In a fashion typical of the legendary filmmaker, these narrated flashbacks – told from Frank’s perspective – are ballads of violence, black comedy and frenetic political maneuvering involving an overwhelming lot of characters. This being Scorsese, “The Irishman” never gets bogged down in the details, because attention to detail is precisely what makes the movie so lively and propulsive. Gunshots that rattle the senses punctuate Frank’s steady – and bloody – rise to power, as do occasional images of a home life that isn’t turbulent, but isn’t the stuff of domestic bliss, either.

In these bits, particularly, Scorsese proves how remarkably in-tune he is with 2019 audiences, and with how we approach his works. Pay close attention to Lucy Gallina, who plays Frank’s young daughter, Peggy, and her attitude towards things that go unsaid in the Sheeran household. Anna Paquin steps into the character’s shoes later, in a mostly-mute role that becomes of vital importance, and of heartbreak.

Zaillian’s screenplay is sneakily one of the year’s best, boasting quips as memorable as any Marvel movie while never relinquishing how unrelenting Frank, Russell and Jimmy must be to stay on top in a world where the only thing surer than the rising number of figures seeking power is the violence that will be carried out for them to ascend to the throne, or to be permanently put out of its reach.

Scorsese’s reliance on modern de-aging effects – the expensive reason that the movie will be on Netflix after only a few weeks in theaters – becomes clear when taking into consideration the movie’s scale: While notably not distinguished by time cards, the varying degrees of aging in the faces of the movie’s actors, the amount of gray in hair, is the clever marker being used to imbue “The Irishman” with the sensation that it’s the stuff of epic, even historic proportions. That those histories are manifested the deepest in relationships between characters, and our evolving perceptions of them, is pure Scorsese.

Of course, the runtime itself is the stuff of epics. Even in an age when theaters organize “Star Wars” and Marvel marathons that feel akin to Rip Van Winkle-level departures from the real world, the fact that “The Irishman” is three-and-a-half hours long (or, roughly, a Monday’s worth of impeachment hearings) would feel like a pure flex on Scorsese’s part if it didn’t make the final act – the keystone of movie’s intentions – all the more effective.

Not that the staggering runtime is anything to worry about; every minute feels completely lived in, even if a few aren’t totally vital. Editor Thelma Schoonmaker – a frequent Scorsese collaborator – does some of the best work of her career (a career that has garnered her three Oscars) in stitching together more than 200 minutes of footage with near-total seamlessness. It helps when it’s Rodrigo Prieto behind the camera; his eye dances through cavernous rowdy union rallies, claustrophobic diners and impending murders, often only pausing for De Niro, Pesci or Pacino to take the reins.

As he approaches 80 years of life, the director is still better than most of his contemporaries – his contemporaries at this stage of his career, that is – at not letting his ambitions get the better of him. In most filmmakers’ hands, the slices of “The Irishman” that feel like wily untamed beasts (the amount of stuff happening on screen in some shots is staggering) would dominate them. Scorsese, on the other hand, is able to wrangle them into exhilarating monsoons of loyalties and legacies; of brotherhoods baptized in blood and patriarchal world orders.

And the larger story of union politics and cross-country rabble-rousing isn’t as important as the brotherhood fueling the movie. It’s already a treat of the highest order seeing Pacino and De Niro doing something that isn’t “Dirty Grandpa” – and their performances themselves echo the era of film that made them famous – but having Pesci along for the ride in what’s easily his biggest movie in 24 years is due cause for cinephiles to call into work when the film hits Netflix. It’s a bit ironic that the man who has had the least amount of work in recent years does the best work in “The Irishman,” but the multitudes of emotions Pesci conveys in an unbroken stare can’t be overstated. At times he seems like he doesn’t blink; his performance certainly doesn’t. It’s titanic acting from a titanic actor commanding sympathy and intimidation—often at the same time.

One of my favorite things about Scorsese is his consistent ability to turn dialogue-fueled interactions into exhilarating set pieces. Not in the way of weaponized screenplays a la Tarantino or Sorkin, mind you, but by empowering his actors to fully give themselves over to the organic power of conversation—profane outbursts, nervous stutters, strained silences. Some of my favorite scenes in “The Irishman” are built on these moments – like a pathos-infused scene where Frank explains to Russell how he learned Italian, or a deliciously tense interaction between Jimmy and rival Tony Pro over proper meeting attire in Florida – which help establish the viewer’s loyalties, before causing us to question them.

Then there's the occasional sojourn to the near-present, in which Frank and Russell hit the road with their wives in what becomes a monumental trip. These moments are comparatively quieter and more drawn-out, effectively pausing the movie so we can recognize just how much history the characters endured. When Frank and Russell start discussing writing one more chapter of it by their own hand, so begins "The Irishman's" darkly pensive final hour.

What lingers in the mind after the credits roll is anchored in the dichotomy of the movie’s blood-stained spirit; the multiple timelines eventually blend in a surreal way that speaks to the power of the medium. It’s never explicitly acknowledged by Scorsese—there is no before and after in his film. Only a haunting bleeding of time through open wounds, and our uneasy recognition – at once sudden yet also inevitable – of the impermanence Frank, Russell and Jimmy must eventually contend with. Masculine rules of order don’t add years to our lives and legacies; only regrets. We witness our main trio contend with the forces of big government, big business and big ego, but time is a whole different antagonist.

And time is a very real factor in the lives of the movie’s four drawing cards, a fascinating lens through which to consider how they may have approached “The Irishman," in turn enriching our appreciation of them. The fact that this quartet is collaborating for the first time, at what feels like the twilight of their careers, has a poetic quality worthy of their influence. “The Irishman” has a poetic quality to it, too; the stanzas may begin with bullets and F-bombs setting the rhyme, but they end with an ominous melancholy. We see lives lived. At the same time, we’re seeing lives being lost.

"The Irishman" is in select San Antonio theaters now, and begins streaming on Netflix Nov. 27. It is rated R for pervasive language and strong violence.