‘Pig’ Review: Whatever you expect this Nic Cage thriller to be, it isn’t

Michael Sarnoski's feature debut is defiant in its moods and captivating in its sadness as Cage delivers an exemplary performance. 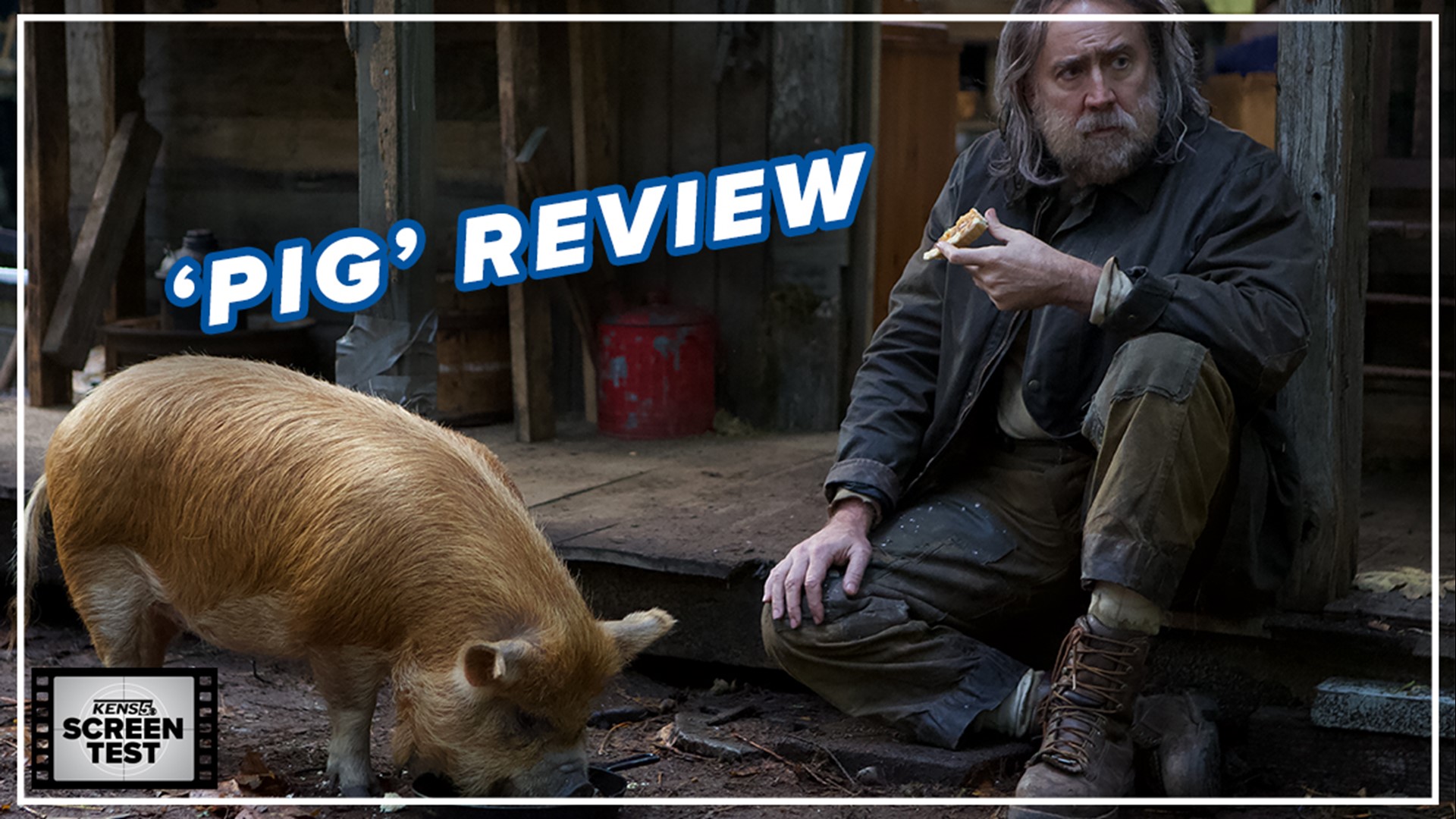 The most curious thing about Neon’s deliberate new drama “Pig” isn’t the premise of a man desperately searching for his stolen swine, nor is it the way his journey unfolds – discreetly but sharply – as an unexpected contemplation of masculine fulfillment. No, the most curious thing about “Pig” is that it represents the feature debut of its writer-director, Michael Sarnoski, and not a storyteller’s long-awaited return years after accepting the world has moved past everything he can offer.

The movie has a surprising, almost shocking emotional candor to it. Perhaps it’s because we see the name of its star, Nicolas Cage, and we hear that ridiculous-sounding utterance in the trailer, “Who has my pig?”, and we imagine something loud and brash and violent and making excuses for itself from the opening frame to the last. There will be people who watch this movie’s trailer, dreamy piano twinkles and all, and give a chuckle, shake their head, at the seeming irony of what’s being presented. The reality is “Pig,” a genuinely marvelous debut that stands out in a year of genuinely marvelous debuts, defies at every turn, giving those who were expecting a movie throwing them with a thumbs-up “go ahead” to snicker at its incredulities a serious run for their money. It’s closer to “Nomadland” than it is to “John Wick,” and if that’s a beguiling sentence to read, well, “Pig” is a beguiling movie.

And also a no-nonsense one. Sarnoski’s screenplay (co-written by Vanessa Block) gives Cage’s mysterious backwoods loner, Rob, and his talented truffle-hunting hog all but 10 minutes of peace and quiet before a nighttime invasion leaves him bloodied and pigless. The jarringly brief intrusion might remind you of a previous Cage vehicle, “Mandy,” and if I were a betting man I’d say Sarnoski is also putting his chips on the audience expecting “Pig” to unfold in similar rhymes and rhythms as that psychedelic revenge saga in which the actor battles a hellish demon with a chainsaw.

Rob doesn’t pick up a chainsaw, nor any weapon in “Pig” for that matter, instead dutifully accepting violence or disdain as the momentum to push forward, exhibited by an at-first undefinable mix of quiet persistence, muted rage and solemn ritual. We’ll come to learn who Rob is and we also won’t; there’s a bold confidence to Sarnoski’s character-first storytelling which weaponizes our decades-strong familiarity of Cage, a ticking time bomb of an actor. He’s always had a shaggy underdog quality and there’s a potent tension that underscores the first act of “Pig” as we anticipate how far Rob will go. In other words, how long it will take for the chaos of Cage to emerge from under that mane of matted hair.

But as his search takes him from his wooded abode to urban jungles, Rob looks increasingly like a man displaced from time. And when it seems we’re the only ones to notice how he stands out in a prestigious Portland restaurant like a dollop of mud on a pristine white suit, the lack of acknowledgement somehow cuts sharper than if anyone around were to throw a raised eyebrow his way. More accurately, it cuts us—the mysteries of “Pig” begin to reveal themselves when we realize it’s as much a story about returning as regaining, about how Rob better understands how the world operates than most of the people around him.

That includes his partner of sorts, Alex Wolff’s white-collar bully Amir, introduced as the overinsistent foil to the carefully calculating Rob as the latter sheds the skin of a cipher and becomes a symbol of rare authenticity in a place where artifice reigns. It’s through Amir that the audience begins to suspect Rob is more than we initially assumed, but it’s also through him that Sarnoski and Block’s ideas – grief, craft, disillusionment – begin to swirl into a complex but mighty fulfilling dish. Driving around in a mustard-yellow Mustang that fashions him a 9-year-old in a train’s massive conductor’s wagon, there’s something revolting and antagonistic and fake about Amir when we first meet him. Surely, he knows more than he lets on when Rob comes calling for help, right?

Well, again, yes and no. “Pig” is a mischievous little thing in that way, revealing worldviews both fuzzy and crystal-clear not in ways that make us feel like information is being withheld so much as being prepared for presentation at the right moment. That sounds like an obvious thing, but movies rarely accomplish it in so naturally and intriguing a manner as here, when we’re left wanting to learn even more, such as how the burden of expectations and quiet resentment have turned Amir into something Rob never allowed himself to be. Among this movie’s many contrasts – juxtaposition is Sarnoski’s most utilized device, and it’s rarely ineffective – is how Rob has liberated himself from these modern trifles while Amir, who becomes wholly sympathetic, thanks to Wolff’s excellent work, still believes in a far-gone promise. To ruminate on the film’s relationships and consequences is to fully savor it, but “Pig” offers in-the-moment delicacies too; a more familiar Cage occasionally pops up in Rob’s amusingly sardonic view of “progressed” society, and I don’t have much faith in anyone who’s heart isn’t shattered by one expertly deployed Bruce Springsteen cover.

This is undoubtedly one of Cage’s most significant performances, a sterling turn rising from the foundations of his character’s in-movie history and reputation. Are we sure the actor didn’t spend a year in isolation to prepare for this role? Rob feels like a stationary presence in a rapidly moving world even before an old acquaintance tells him “You have no value anymore,” and I’m sure there are moviegoers somewhere who would wrongfully say the same to the actor filling Rob’s shoes. Here even Cage’s shouts feel like whispers, as if he were someone saving his breath and biding his time, and Sarnoski adapts the pacing of his direction to that of his star. It’s smooth, but not languid, its melancholy strikingly composed with a veteran filmmaker’s patience. “Pig” at times feels borne out of a place of weariness, as if the director arrived at the set every day with a sigh and a limp shrug of his shoulders before getting out of the car. That isn’t to say the movie is passionless—far from it. But it puts into stark relief what today’s movies increasingly aren’t, or at least the kinds which collect mainstream pop cultural currency. And it brings intriguing new purpose to movies beyond mere entertainment at a point in time when it seems suggesting movies can transcend mere entertainment would get your ratio’d on Twitter.

Against all odds, this relatively “quiet,” “small-scale” and “minor” movie – words that will be used by folks who understand and also don’t understand what they mean by them – was made for the same size a screen as an “F9” or a “Black Widow.” Its enormity of feeling is simply too much for a living room or laptop. As Cage’s Rob understands from an unspecified section of the Pacific Northwest forest, it demands what the dark affords. And it leaves it up to us to decipher whether its closing moments ultimately reverberate with sadness, regret or closure.

"Pig" is rated R for language and some violence. It's available in theaters and on VOD Friday.