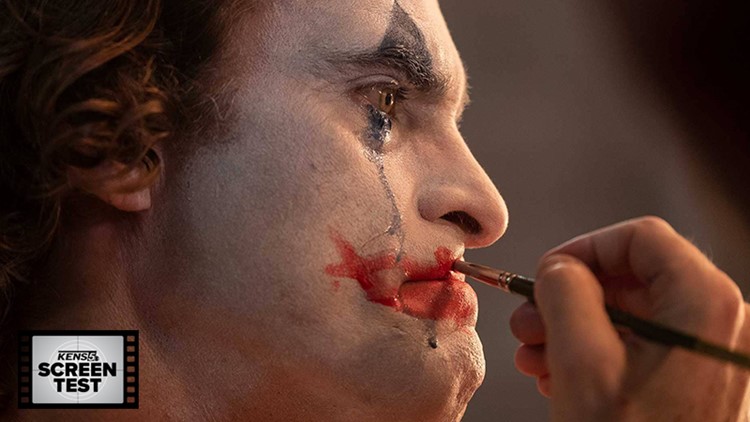 Review: 'Joker' reimagining is an artificial, bloody circus without a punchline

The humble beginnings of “Joker” invite us to get unnervingly close to a lanky-as-a-corpse, long-haired Joaquin Phoenix. Here he’s Arthur Fleck, a pseudo-everyman unable to keep his frown hooked into a smile as a tear smears his clown makeup. The man who will eventually become director Todd Phillips’s stripped-down version of the Clown Prince of Crime has clearly been doomed from the start, but we never really learn what is contained in that tear—nor how it evolves into flashes of violence as brutish as anything we’ve seen in comic book movies since 2009’s “Watchmen” as they are empty in meaning.

“Joker” would love for you to believe it’s a story mirroring what is happening, in isolated spaces, outside our walls. The product of a seeming thought experiment – “What if a comic book supervillain movie, but without the comic booky-ness?” –this gleefully cruel film from the director of the “Hangover” movies is supposedly set in a version of Gotham City that lives in the 1970s, though that detail’s impact extends only so far as to pay homage to the world of the cinematic inspiration it tries so hard to honor that it ends up parodying: Martin Scorsese’s 1976 drama, “Taxi Driver.”

But no—if you make the mistake “Joker” is interested in the era of Watergate and Vietnam and Travis Bickle, you’d be corrected early on. We only get a single real glimpse of Phillips’s world – another moment of vulnerability for Arthur when a group of teen rascals baits him into a spontaneous beat-down in a back alley –  before he wonders aloud to a social worker, “Is it just me, or is it getting crazier out there?”

It’s more a declaration than a curiosity. Phoenix’s delivery, however contemplative it may read, is as knowing in the movie as when we first heard it uttered in early trailers, and what it’s suggesting is based not as much in what little we’ve seen of the “out there” of this Gotham as our own realities blend with it: The story about to unfold is, to Phillips, and also to the movie’s co-writer, Scott Silver, meant to be a seemingly populist view of 2019.

And Phillips’s view of our world – shot cavernously and adoringly, like a hesitant elegy, by Lawrence Sher – is awash in pestilence. There’s an abrasiveness that has seeped into the walls and subway cars and class dynamics that you wonder how Gotham is still standing under the weight of it all. If this is a world not yet dominated by the Joker's order-upending rhetoric, how could it ever stand a chance? More importantly, in the movie’s mind, how could Arthur? Everyone surrounding him – aside, seemingly, from his mother – seems to have caught the airborne selfishness like the flu. He’s disposed of at every turn, the inferior in every interaction—someone whose infantile personality and lack of control over any given situation is a strength only in his fantasies of being received like a son by Robert De Niro’s Murray Franklin, a late night talk show host and funnyman Arthur idolizes (and also a parallel-universe version of another Scorsese antihero, Rupert Pupkin).

But Murray is clearly as in on the inescapable joke of this slippery world as anyone, something we yearn for Arthur to see before he becomes a punchline in it.

When he finally is, it’s Gotham that has built the capacity for Arthur to act the only way he believes he can—its denizens, its power structure, its morally binary nature. A trigger is pulled, a madness is sparked…and a city perpetually on the edge of tipping over into it is engulfed.

“Joker” isn’t a character study so much as the grime-soaked portrayal of a society so unfeeling and drone-like that its tethers to familiarity are broken by an unwillingness to actually comment on what's unfolding on its streets. The movie would have us believe that Arthur is undergoing a transformation from urban castaway to pariah ringleader, but there’s already so little care taken to codify his origins aside from labeling him as someone with a mental illness.

Even then, it’s to the extent of diary diatribes and typewritten diagnoses; the only thing we have to recognize Arthur as a mentally ill person who his world has written off is his handing cards to strangers informing that his inability to stop himself from laughing in the worst of situations is a symptom, and their turning the other way.

It’s difficult to reconcile the gravity of such a character choice, one so plain-faced in its genre-breaking conventions, when Phillips and Silver don’t give a hint that they're even aware Pseudobulbar effect is a real condition; in practice, “Joker” is drawn to utilizing Arthur’s affliction for the most awkward of moments meant to make us laugh. He isn’t someone not only misunderstood by the world, but, more acutely, someone the world makes no effort to understand—the movie’s writers exhibit the same indifference.

As Arthur’s situation leads him further down the road of no return – including a recognition of the power imbalance dominating his life and the film succumbing to making the Waynes more than just paint on this world's peeling walls – the more it feels like Phillips is making a farce of his own intentions, and an unconvincing imitation of his supposed influences. Much like the altar ego Arthur takes on, “Joker” feels increasingly like a façade—a construction of familiarly grimy aesthetics and attitudes that don’t manifest anything memorable beyond the blaring, violent string medleys of Hildur Guðnadóttir's anthemic score.

The world of “Joker” may be more at fault for its eventual going up in flames than Arthur is, but Phillips’s determination at painting a familiar environment of moral dubiousness and pent-up frustration doesn’t succeed at breaking free from the over-stylistic attraction of its comic book shackles. The movie is not as disruptive as it thinks it is, nor as provocative, and that’s mainly because Gotham’s boiling-over ends up being much more black-and-white than anything hoping to mirror the complexities of our America.

Arthur’s first act of violence – one of seeming self-defense that he follows up with a solitary ballet and curtain call to no one but himself – bornes not just the Joker, but also newspaper headlines of anti-rich sentiments. Riots of clown-faced protesters overtake the city overnight. Forget about lighting the match—this world has shoved a firecracker inside a tinderbox, and it doesn’t feel like Arthur helped light it so much as nab a front seat to it. The contours of the movie’s ill-fated intentions to bred serious conversation are seriously narrow; because of that, Phillips and Phoenix’s “Joker” doesn’t so much resemble an agent of chaos so much as a jester in the court of inevitable social upheaval.

Perhaps predictably, Joker” feels most confident as a showcase for one of our greatest living actors lathering on the makeup of one of our greatest pop culture villains. It’s a performance that is as delectably grim as we allow ourselves to believe it is. Phoenix lays bare Arthur’s pain under the smile he wears like a prescriptive mask, but it’s seemingly all he’s asked to do. His Arthur is never not believably resolute in wanting a mark on the world, preferably through “bringing cheer and joy to the world,” as his mother has prophesied to him all his life. But there’s also an omnipresent inkling of a feeling in his eyes that it can only ever happen in his mind—the tension fuels his performance and gives it a levity the movie’s writers can’t hope to sustain when Gotham erupts.

Heath Ledger’s Joker dubiously dismissed the suggestion that he’s a guy with a plan. Phoenix’s Arthur limps through dark hallways and haphazardly scrawls ominous thoughts in his diary like someone searching for one, but the more he cackles with joyless laughter, the more that search extends to Phoenix himself in what is written as a fairly static role.

If there is any crescendo that Phillips builds towards with his lopsided direction, it’s how the rabbit hole of delirium Arthur eventually plunges into manifests in the viscerally shocking. The man whose triumph of being recognized in some way by the world around him – even if indirectly – now decides to act on his own dark intuitions through the only way the world has now seemingly granted him a license to: Violence.

RELATED: Review: 'The Death of Dick Long' is a poignantly ridiculous Southern-set thriller

Ledger’s Joker was driven by anarchy; Arthur is fueled by a powerlessness that renders him a Messiah for Gotham’s population of cast-aside faceless by movie’s end. But Arthur never wields a machine gun or rocket launcher on the road there; his violent actions (which can be counted on one hand) are intimate affairs that lie on a strange spectrum of tension.

One killing is directed by Phillips like a horror movie; the apex of a figure who has jumped ship from tragedy into the depths of monstrosity, and firmly cementing him as a figure on a personal crusade.

Another is a cartoonish outburst manifested in spurts of blood and played like a jump-scare before devolving into incredulous dark comedy—of the bizarre and off-putting kind. There’s a bloodlust in “Joker” that ends up feeling horrific for the sake of being horrific, as if the entire movie was building up to capitalizing on our expectation and knowledge that DC movies is supposedly the dark antithetical to Marvel—I don’t know what one specific act of murder and subsequent dark irony is meant to manifest for us other than agape jaws and a confirmation that comic book movies can, indeed, occasionally act on R-rated fantasies. Haven't "Deadpool" and "Logan" already done so?

What Phillips forgets with the violence in his movie, and which ultimately betrays the side of "Joker" wanting so much to do what other genre offerings past haven’t, is that horrible acts are only as scrutable as their consequences. The only semblance of consequence in the movie is its abrupt plop of a finale, a shrug from Phillips of what he seemingly set out to do, and an insistence that he never really meant to trod down the road he takes, and abandons. “Joker” ends up being risky in the way a grade-schooler giving their principal the finger behind their back feels risky—it’s dismissive of both what it set out to be, and, almost impressively, what everyone pre-ordained it to be.

By the time “Joker” shakes its fists to the heavens, spewing its rage against economic and sociopolitical mechanisms in the same motion as the Joker commandeering the gun that Arthur was provided, Phillips’s movie has blundered itself into being so detached from our reality that you’re left wondering who its audience even is. The real punchline? We’ve heard it all before.

"Joker" is rated R for strong bloody violence, disturbing behavior, language and brief sexual images. "Avengers," this is not.