Amid the forced gags and disorienting battles are glimpses of an emotional depth which the world's biggest franchise has typically shrunk away from. 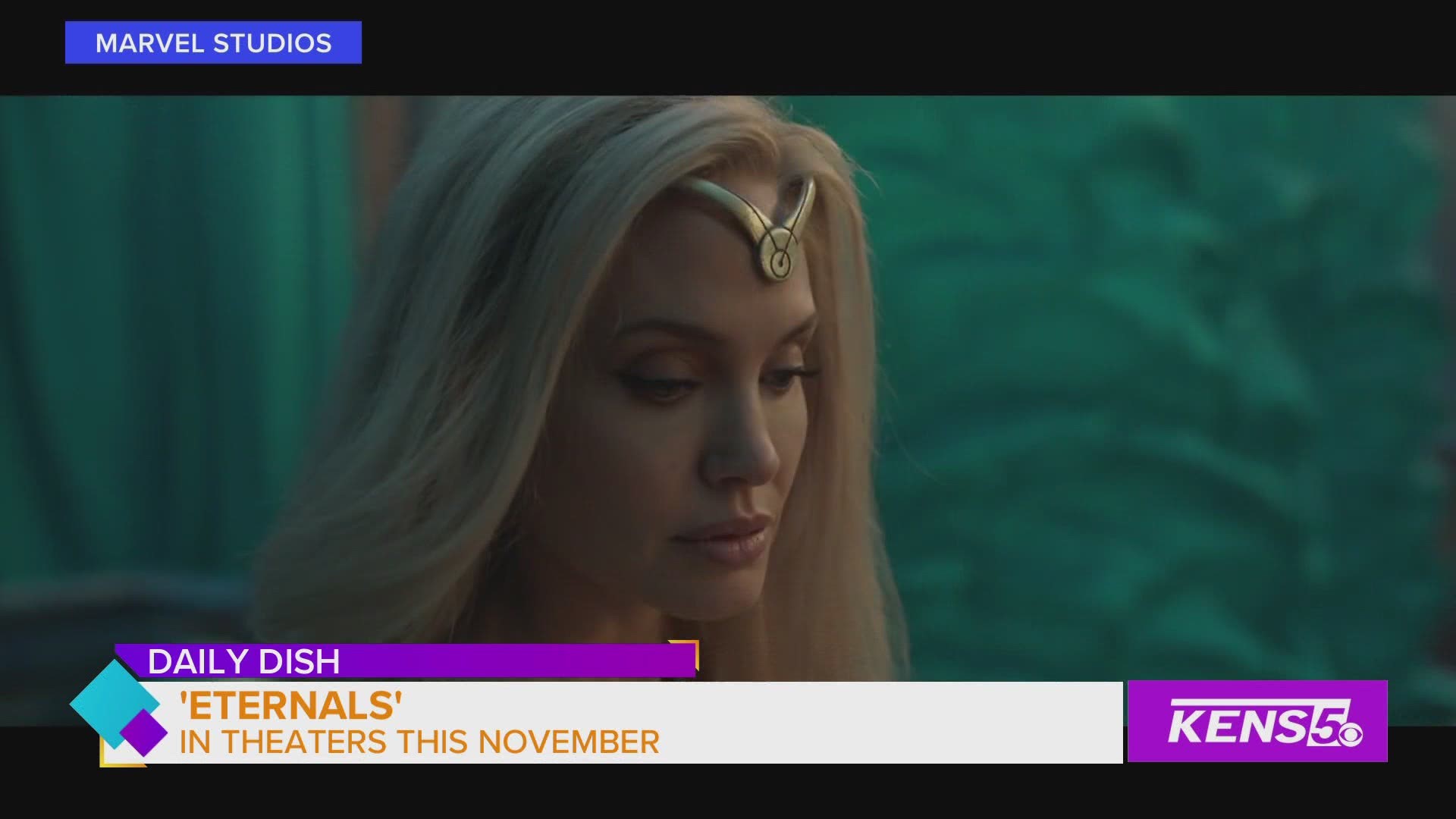 It’s no small feat of irony that “Eternals,” the 26th Marvel Cinematic Universe chapter, opens with talk of cosmic balance. A nod to when the box office’s favorite genocidal alien was waxing poetic about his world galaxyview? Maybe. But it’s also hard not to consider cosmic balance in the context of the movie’s director, Chloé Zhao, an Oscar-winning arthouse titan in her own right who up to this point has worked to expand American cinema during a time when the MCU has succeeded by streamlining it. Many an indie filmmaker has been welcomed into franchise architect Kevin Feige’s embrace only for their idiosyncrasies to vanish within his grand designs.

Perhaps reflective of its own kind of triumph, “Eternals” provides a comparatively clear view of Zhao reaching to pull the MCU to more contemplative places than spandexed showdowns and rollicking set pieces. But her grip is tenuous, and you can almost imagine Feige pointing the industrial-sized fan in her direction, tossing in handfuls of colorful confetti whenever he worries that audiences won’t recognize the series’s jaunty painlessness amid the naturally lit pondering Zhao prefers. The result is a two-and-a-half-hour epic which unfolds across centuries, civilizations and tonal commitments, doing more than the last several franchise entries combined but accomplishing very little as it slots itself alongside this year’s “Black Widow” and “Shang-Chi and the Legend of the Ten Rings” as another pseudo-family reunion story.

The titular family here is bound not by blood but by directive. Created several thousand years ago – at the dawn of time, you might say – by a great galactic being, Arishem, the Eternals are superhoic beings dispatched to Earth as humanity’s guardian angels. They’re a dutiful posse as distinct in their powers as they are ambiguous in personality. Thankfully for our human ancestors, it’s the laser beam-shooting eyes of Ikaris (Richard Madden), the speedster trickery of Makkari (Lauren Ridloff) and the violent swagger of Thena (Angelina Jolie) that prove useful in taking down the monstrous Deviants during Mesopotamian times, not personality. That doesn’t stop sparks from flying between Ikaris and Gemma Chan’s matter-manipulating Sersi, however, and in their MCU-rare moment of sexual consummation (don’t worry, parents, your kids have seen steamier TV ads) resides the seeds of “Eternals” as a halfway-fruitful and pop culturally relevant exploration about what happens when creations take on a life of their own.

You can feel Zhao’s eagerness to expand on those ideas come the present day, when centuries of bearing witness to Earth’s population growing on parallel tracks of capability and viciousness while being forbidden to stop the bloodshed has made the immortal Eternals a sympathetic but passive bunch (the apocalyptic skirmish between Thanos and the Avengers is below-the-fold news to these gods). Sersi is now a lecturer on the ancient arts and dating a different Stark brother, Kit Harrington’s Dane, but when a Deviant surfaces for the first time in centuries it isn’t as much a shock to her system as when Ikaris blasts in to save the day.

So begins a road trip to bring the Eternals back under one roof after the loss of their commander, a regal Salma Hayek’s Ajak, leaves the group rudderless about what their mission on Earth was in the first place and who it makes them now. In that muted suspense, the movie manages to be one of the scant MCU entries to acknowledge the existence of emotional conflict. What’s lacking is enough self-awareness to bring the best out of the paradoxical partnership between Zhao’s textured melancholy and Feige’s two-dimensional sense of spectacle. In the spirit of the Russo brothers dubiously citing “The Parallax View” and “Three Days of the Condor” as inspiration for their own MCU efforts, “Eternals” might very well be the MCU’s biblical epic. Only I don’t recall Pontius Pilate cracking wise before ordering Christ to the cross.

On paper, “Eternals” represents a union of director to material as inspired as it is surprising. Perhaps the most philosophical MCU entry to date and certainly the most existential, “Eternals” makes a bid at externalizing the enormity which underscores “The Rider” and “Nomadland,” turning Zhao’s contemplative protagonists into humbled wanderers. She excels at fashioning time’s ceaseless passage into its own kind of cataclysm, and in a story which echoes “Pinocchio” when the Eternals begin to think, dream and act for themselves, one sees how she might be well suited to take the source material’s gargantuan canvas and give it a depth to justify the heaps of dry exposition.

The problem is that in order to maintain a semblance of momentum, “Eternals” employs a momentum-stifling boomerang narrative structure; that, combined with a cast bigger than all of Zhao’s prior features combined, neutralizes the emotional intensity of this cosmic melodrama. The line between self-awareness and self-parody turns fuzzier than the army of roaring, rubbery Deviants the conflicted heroes were ostensibly created to pick off so many millennia ago. Sersi is the closest thing to being an audience proxy, but Kumail Nanjiani’s cosmic gunslinger Kingo makes for a distractingly unfunny audience tour guide.

That “Eternals” co-opts Nanjiani’s tempered but here ill-advised brand of absurdity only further muddles priorities when Kingo’s bits force the arcs of his vastly more tortured companions to be compressed. This is how the movie arrives so suddenly at the moment of one of humanity’s greatest atrocities without justifying a harrowing, imagined connection to genius inventor Phastos (a brilliant, underused Brian Tyree Henry), and how it so startlingly asks that we buy into the youngest Eternal’s suppressed adoration which stretches a love triangle into a trapezoid. In light of Marvel recently capping an impressive – and it is impressive, no matter what your investment in these movies – “Infinity Saga” culminating in Iron Man’s aptly emotional sacrifice, it’s mighty off kilter and slightly disorienting how “Eternals” asks that we invest wholeheartedly in its carousel of protagonists via a single movie. Then again, there are moments when two characters share a quiet space just long enough for Zhao to unearth some unspoken, powerful reckoning, and the fascinating, flawed experiment is almost made worthwhile. A magnetic Jolie, for her part, and in a role written in hardscrabble, injects a subdued gravitas the likes of which only a handful of actors have been able to gift the MCU, even as her part feels merely outlined.

Like many movies before it – though unlike most every movie in the MCU – “Eternals” is a vastly more interesting movie to ponder and talk about than to watch. Where it falls short isn’t a matter of whether or not the MCU should stay in its lane; that Feige is willing to explore what these movies can be is an exciting proposition after two dozen movies of just-good-enough superhero sameness. But the harder this intermediary, conceptually fascinating Marvel chapter veers from the familiar, the harder it collides with the guardrails of frustrating MCU formula. In her magnificently messy story about puppeteered, all-powerful beings snapping their strings, it’s a considerable achievement that Zhao at least manages to bring some tension to her own.

"Eternals" is rated PG-13 for fantasy violence and action, some language and brief sexuality. It opens in theaters Friday.