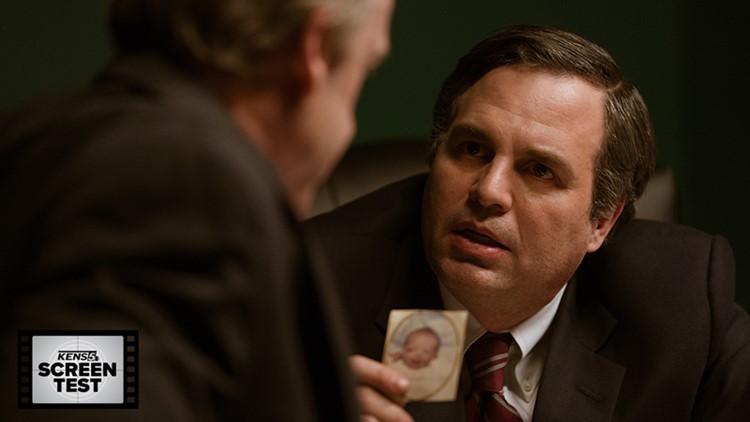 “Dark Waters” spends its two-hour runtime desperately searching for something to be hopeful for. Many scenes early in Todd Haynes’s enraging, dispiriting corporate-greed-run-amok truth-teller of a story have the feel of an ecological horror – the teeth of an American heartland town’s denizens are blackened, a cow inexplicably turns on its owner, a chemical plant lingers like a beast of steel and steam – in which hope extends as far as putting up a fight for as long as you can.

Robert Bilott (Mark Ruffalo) knows all about refusing to put down the sword. As the events of “Dark Waters” depict with slow-burn intensity – and as the details of the Nathanial Rich-penned New York Times article on which the screenplay is based show – a substantial part of the lawyer’s career was devoted to holding the American company of DuPont to account, after discovering it had for years knowingly contaminated water resources. Lives were endangered for the sake of that common American drug: Profit.

It’s one of the movie’s many ironies that Robert, up to the start of his crusade (1998, sparking an in-movie chronology that stretches unbearably close to present-day), started his career defending chemical companies like DuPont, which is presented as less a company and more a harbinger of American essence—and excess. It isn't a stretch to say that his life – professional and personal – is turned around after a farmer with loose familial connections seeks him out with concerns that something is wrong on his property. “Dark Waters,” written by Mario Correa working off an earlier script from Matthew Michael Carnahan, tightly embraces the implication of the facts if not for the facts themselves; and so while Rich’s article describes videos shown to the real-life Robert of the strange green water and “malformed” cattle on Wilbur Tennant’s property as having “the quality of a horror movie,” Ruffalo’s Robert visits and witnesses the horror for himself: Dozens of mounds making up a cattle graveyard on the Tennant farm.

Robert’s suit and tidy comb-over makes him look distractedly out of place in the scene—he isn’t supposed to be seeing this, during a visit that is essentially a favor. But despite their differences in class and attire, Robert and Wilbur both have the spirit of everymen (Ruffalo, purposefully, feels like a vulnerable mortal among titans in DuPont meeting room). And so the lawyer’s transition from defender of the gods to defender of the meek begins in earnest, feeling natural in its deep-seeded heroism. He agrees to represent the Tennants and sue the company he’s chummy with, and “Dark Waters” morphs into a familiar procedural of rifling through documents, sorting out history, questioning authority and seeking the justice that so often lands wide left of American corporations with the influence of small nations.

DuPont as depicted by Haynes has an ominous dedication to inevitability that would make Thanos proud, a refusal to surrender its power that would make the Lannister clan envious. Empowered by profit and trusted by the working-class livelihoods it employs, the company – which over the course of “Dark Waters” transcends representation by white men in expensive clothes to become a kind of shapeless force of steadfast amorality – has an uncanny ability to make every swing (EPA fines, scientific studies, etc. etc.) land with the impact of a gnat, in turn leading the viewer to wonder if Robert’s continued efforts are even worth the eventual toll on his home life and health.

RELATED: 'The Irishman' Review: Scorsese's crime epic is a sobering account of gangsters and impermanence

Correa’s screenplay suggests a natural order of things that will naturally always end up favoring systemic white-collar crime—that DuPont is constantly waiting for Robert to wear himself out in the boxing ring of what is right and wrong feels like Haynes’s movie wondering out loud: What is more innately American, standing up for the little man or growing so mighty that you never have to?

Whether the result of Haynes's nihilism-tinged storytelling is intentional or an inevitable byproduct of sticking closely to harrowing truths is a legitimate question. Grimy blue and greys dominate the cityscapes of “Dark Waters,” as if corruption has polluted the world to a point of no return. The movie takes us to meetings of “chemical alliances,” which sound like the domineers of dystopian worlds.

At one point towards the movie’s middle, a sweat-streaked, exhausted Robert narrates the historic travesties DuPont has wrought to his wife (Anne Hathaway), and his matter-of-fact tone feels of apiece with how future species will recount how we brought upon our doom. “Spotlight” – a similar Mark Ruffalo vehicle – has an uplifting coda despite the paradigm-shifting truths its journalists uncover, and this month’s “The Report” is fueled by a frenetic urgency to take up arms against corrupted ambition; by comparison, “Dark Waters” feels three inches from the cliff’s edge. What makes it a bleak portrait of corruption is that the movie seems to shrug that fact off, despite the hell we see Ruffalo going through.

Of course, the feeling that it’s all a bit overbearing is justified by how truthful it is. As we near the end of the 2010s, the institutionalized greed that has fortified capitalistic battle lines is clear in headlines and Twitter feeds. Through a slower cinematic speed that forces us to empathize with how dedicated Robert remains to finishing the fight he started (the movie feels about a half-hour longer than it is, and makes me wonder if it couldn’t be more effective as a five-part TV series) as the calendar flips to new decades, “Dark Waters” is unable to capture the sense of urgency I imagine Haynes was striving for. This fight, his movie ends up saying more often than not, is one that can’t be won.

And yet the film remains an engrossing watch from beginning to end, housing its nuance in the micro rather than the macro. A tension naturally arises from Robert planting a target on the people who typically pay him to plant the target on others, but the Nightly News-sized enormity of that drama trickles into his personal life. The years-long battle is an unhealthy one; you can spot his will gasping for breath in the hands he can’t stop from shaking.

The most fascinating of these smaller tensions exists in his evolving relationship with the community that DuPont practically laid the bricks for—glances thrown in the direction of Robert’s family from rural Americans in the unemployment line under DuPont’s shadow say more than words ever could. These too-rare scenes are fueled by the grimmest reality procured by Haynes’s movie: Disrupt the status quo, and everyone takes the fall.

Only we can help ourselves is a motif that echoes throughout “Dark Waters,” and it’s a true one. Robert may have enlisted himself in the fight against the Man, but Wilbur Tennant was the first to take up arms by approaching him. But there’s another truth which rises to the surface of the movie’s slimy politics with even more clarity, punctuated by the movie's triumphant final moments that are really anything but triumphant: We will be our own undoing.