'Always have a plan B, C and D': Alejandro Montoya Marin on the production of his 2021 SA Film Festival selections 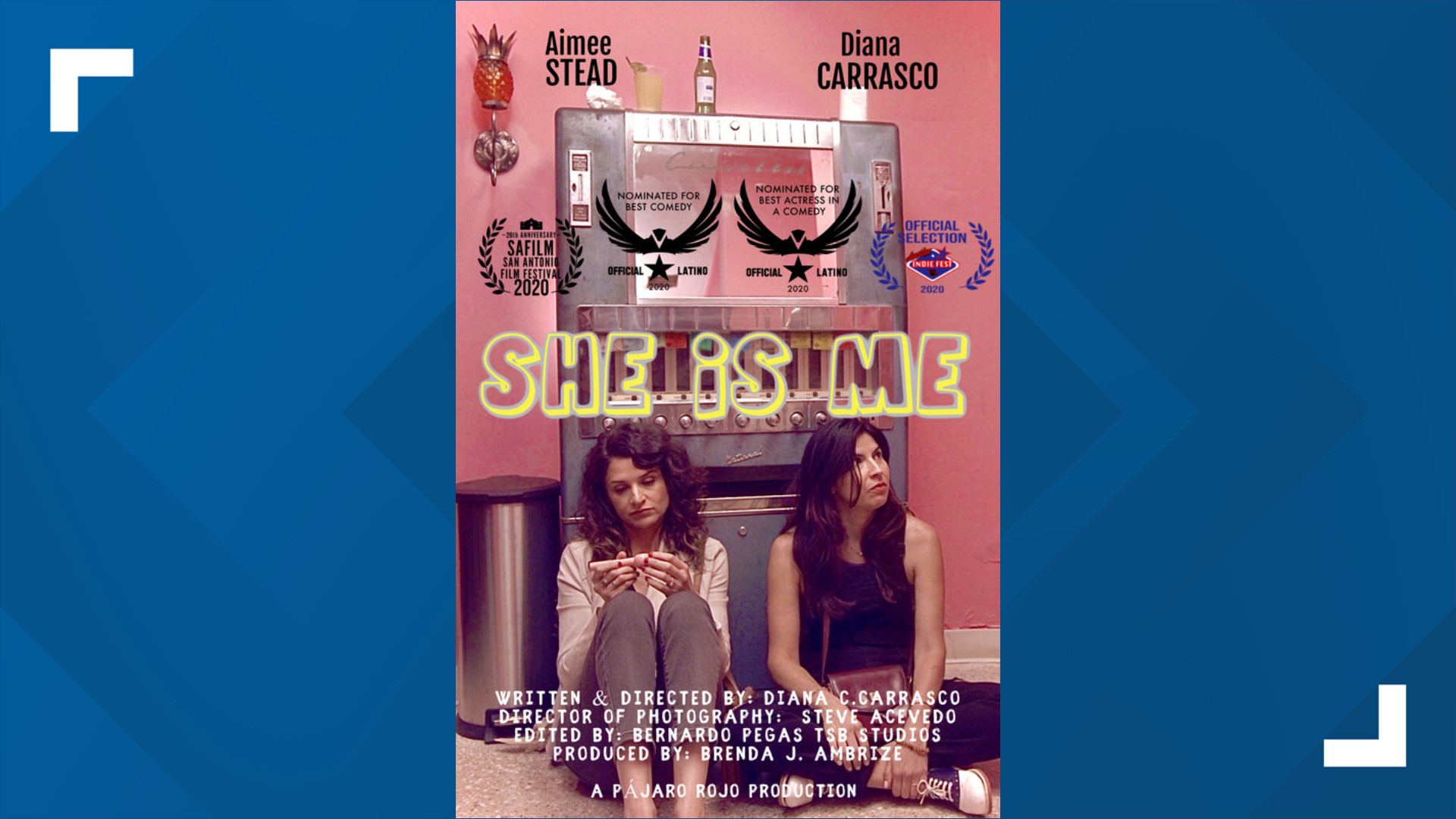 SAN ANTONIO — The spirit of the ‘90s is alive and well in “Millennium Bugs,” a high-energy dramedy from writer-director Alejandro Montoya Marin screening this weekend as part of the San Antonio Film Festival slate. The filmmaker remembers the era well. After all, he came of age during it.

But it isn’t just Game Boys, punk music and iMac G3s which form the movie’s late-1999 aesthetic. There’s also Y2K-era anxieties, a sense of deadlines for personal reckonings lingering just around the corner. Marin – leaning into the ‘90s nostalgia for our Zoom interview with a Smashing Pumpkins T-shirt – said he was 18 at the time, and recalls the atmosphere of uncertainty like it was yesterday.

“We were at a party at New Year’s (Eve) in Mexico, and at 11:55 and 10 seconds everyone's phones start screaming,” he said. “It was the most eerie thing, cause it’s like a ballroom and everyone’s like troo-troo-troo, traa-traa-traa, everyone starts calling. And we’re all like, ‘Oh my God.’”

As we now know, and as everyone at that party would discover five minutes later, 2000 would be welcomed with a relieving whimper instead of a computer-disruptive bang. Despite the Y2K scare ultimately going for naught, it was potent enough that one would think Hollywood would toy with the memory of it.

Fast-forward about 20 years, to Marin watching a documentary about the ‘90s and realizing how, despite a long and storied history of disaster movies, there hadn’t been a memorable one centered on perhaps the most famous historical disaster which ultimately never came to be. That’s when the idea of “Millennium Bugs,” set against the backdrop of what was known as the Millenium bug, was born.

“It’s like, ‘I’m pretty sick and tired of the laser shooting up in the sky, cars going crazy. We should make a movie (where) it’s in the background, but there are problems of fitting into the world and with friendship being at the center of it,’” Marin said. “That, to me, felt like something nicer and something more like the ‘90s with the tone of today’s movies being such a big spectacle.”

The result – a funny, frenetic and ultimately sincere portrait of two stuck-in-emotional-limbo twentysomethings struggling to un-stuck themselves at the potential end of the world – is Marin’s second feature-length effort, and though this weekend won’t be its world premiere, the San Antonio Film Festival is hosting its first in-person screening.

Of course, setting his movie in the final days of the decade doesn’t just allow for the natural creation of potentially cataclysmic stakes, but also for playing around in a ‘90s sandbox viewed more and more with nostalgia each day.

And play around Marin did: Keen-eyed viewers will find plenty of references to the times, not just in the frame but in the soundtrack as well. He was even able to get original music from the band Please, which got its start in the ‘90s.

“I’d been working with one of their members, Charles Newman, for four or five years. And we were going to get a very, very big song from the ‘90s, but they wanted more money than the movie cost to be made,” Marin said. “He was able to put the band or the group together to make a song and we actually shot a music video that will come out as soon as we start promoting the movie, which is very soon.”

One of the first sights that will transport streaming-era viewers is the video store where Miguel works—that’s Austin-based Vulcan Video, which was forced to shutter its doors for good in April of 2020.

“When we shot ‘Monday’ (Marin’s first feature), across the freeway was Vulcan Video store. So we went in, we talked to the owner, he was super supportive. We had to move around DVDs and tapes because in 1999, I mean, there were DVDs but there weren’t as much as we have.”

Marin also recognizes the irony of “Millennium Bugs” being set against the uncertainty of 1999’s final days when there is still so much uncertainty during a prolonged COVID-19 pandemic. Both he and producer John Kaler, however, emphasized it’s purely coincidental; they say the idea was conceived and the film shot long before “coronavirus” became a part of our daily lexicon.

“It has that same context of no one knew in ‘99 what was going to happen—and that’s how we still feel today with everything going on,” Kaler said. “There’s still a lot of unknowns. It does relate to this moment, but we didn’t write it around COVID because we had no idea this was coming.”

“Last year, by fall, I was just like, ‘Why is this happening? Is this a sign to not keep pushing it?'" Marin added. “The coincidence is just funny. But how much does that say, that we’re kind of like in the same boat that we were 20 years ago?”

“Millennium Bugs” may unfold against Y2K anxieties, but that context is just that: Context. The true essence of the story is the bumpy friendship between Kelly (Katy Erin) and Miguel (Michael Lovato), and the chemistry between the two leads is its most endearing element.

Erin in particular embodies an energy which splits the difference between Emma Stone and Mary Elizabeth Winstead; Marin was so taken by that energy after meeting the actress that he tailored the character to her charisma.

Lovato, meanwhile, was enlisted after Marin had auditioned several others for a part which grounds Kelly’s livewire energy with deeply rooted young-adult ennui. It was his eagerness to impress the director that won him the role.

With his leads and an extended ensemble of zany character actors in tow, Marin and his team shipped out to Albuquerque, New Mexico. The Duke City is a familiar place for the filmmaker; he's been living there for about a decade, steadily planting his roots in a state that, between the stark vistas glimpsed in “No Country For Old Men” and the “Breaking Bad” phenomenon (along with favorable tax incentives), is increasingly proving its Hollywood bona fides.

Though the production would travel to Austin for a few scenes, Albuquerque is where most of “Millennium Bugs” was shot, and where it took on the spirit of a true indie. Not only was it entirely crowdfunded (Marin estimates the final budget at around $60,000), but the filmmaker turned down would-be investors whose wallets could smoothen out the shoot’s rough edges in order to retain his original vision.

For one thing: It was important to him that Kelly and Miguel’s relationship remained a purely platonic one, a rarity in today’s stories whether they’re told on the big screen or the small one.

“To me that was more important: To do a personal project about friendship and how differences between people can compliment them,” he said.

Marin might liken himself to the one-day-at-a-time mentality that drives Kelly and Miguel at the point in their lives when we meet them in the movie. He says “every problem was presented” during the shoot, and it was his experience on Robert Rodriguez’s reality competition show “Rebel Without a Crew,” where he created “Monday,” which illustrated how far a problem-solving mentality could take him.

“I don’t have the millions of dollars of budget, so I have to think off the cuff. I have to always be problem-solving, always having a plan B, C and D,” Marin said. “Because at any moment, anything may shift and you may have to adjust, and (you have to) also give yourself the opportunity to roll with spontaneity.”

That enthusiasm for improvisation is what made Marin stand out to Kaler in the first place.

“The one thing I know about Alejandro is he wants to tell the story, and he wants everyone to be able to relate,” the San Antonio native said. “He doesn’t want to sell his soul just to make an investor happy. He wants to bring the most organic truth to the screen.”

Their young partnership has proven fruitful so far. In addition to producing “Millennium Bugs,” Kaler also produced and starred in Marin’s short film “Perps,” a higher-energy farce about two stoners’ run-in with a cop.

That short plays at the San Antonio Film Festival Saturday afternoon, before the feature's 6 p.m. showing. The scheduling is appropriate; the heartfelt melancholy of "Millennium Bugs" plays like a soothing chaser to the quick shot of kinetic filmmaking that is "Perps."

Audiences who make it out to the festival and like what they see from Marin’s projects can expect more to come; he and Kaler have started Push Start Films as a way to collaborate on future projects.

For now, though, the up-and-coming filmmaker is looking forward to the San Antonio Film Festival screening, as well as a potential showing in Albuquerque later this year.

“I’ve never seen ‘Millenium Bugs’ on the big screen, and it’s a big movie,” Marin said. “So I’m very much looking forward to seeing reactions from people—good or bad.”