Call it beauties and a beast. 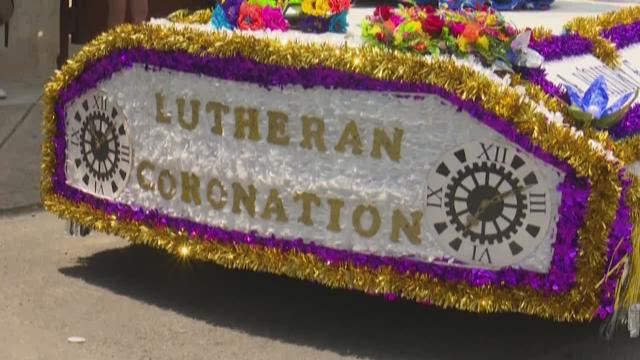 Call it beauties and a beast.

When members of the Royal Court of the 20th Century showed up to claim their float before Friday's Battle of Flowers parade, the royalty found they were the victims of theft.

The 25-foot trailer used by the Lutheran Coronation Group to tote their float had been stolen from the parking lot of a downtown church.

"We're a small, non-profit, volunteer organization and it's a really big deal for us to try to recover from," coordinator Sandy Liwang said.

The group uses the trailer to travel around Texas, appearing in parades in about 20 small towns during the year. Next week, they are scheduled to participate in a parade in Corpus Christi, so Liwang said they are scrambling to find a solution.

The two-part float is towed by an ancient bus frame with a 1967 Chrysler engine. Liwang said the tow vehicle is perfect for parades but cannot be used on the open road.

"Can we just please have our trailer back? We do a lot of parades and it's really important to us," Queen Briden McGraw said.

McGraw said if she had regal powers, she would use them to compel the thief to return the trailer.

Princess Catherine Classen said discovering the theft while trying to make it to Friday's parade produced a lot of anxiety.

"It was just chaos because it was already a chaotic morning so we are praying, all of us, right now," Classen said.

Princess Kaitlin Jowers said if she had her royal scepter with her, she would issue a royal decree to the person who stole something from the non-profit organization.

"Please, please bring it back. It would really mean a lot to us because we want to be able to go to the next 17 parades," Jowers said.

Duchess Raquel Whitmire said everyone in the group is praying for the thieves in the hope that they will have a change of heart and do the right thing.

"I don't know what they're going to do with it, but they should just return it because we need it," Whitmire said.

"It makes me really upset to know they would steal from such a holy sanction, they would take something from someone that didn't belong to them, especially from a church," Duchess Shelby Robertson said

Duchess Katherine Rupp said everyone finds it hard to believe that the tradition of finding safety in a church parking lot every year has been violated.

Liwang said the theft is a loss of about $7,000 because the trailer was a custom fabricated item.

"First of all, we'd really like it back. No questions asked. This is something that we don't have insurance for because insurance normally goes with a vehicle, so we only have liability on the float, not the trailer," Liwang said.

For more information, you can visit their GoFundMe at https://www.gofundme.com/3plhqs0.

Here is the message posted on the fund-raising appeal:

"San Antonio Lutheran coronation is a volunteer non-profit organization. On the evening of April 27th the trailer that we use to transport our association float was stolen from the parking lot of Grace Lutheran in downtown San Antonio. Without this trailer we are not able to transport our float to the 17 other parade that we participate in throughout the region. Please help us raise the money to replace our trailer and continue our parade season.

The trailer we lost was a 25 foot long dual axle vehicle trailer modified to accommodate our Fiesta float, along with the custom strapping used to secure the vehicle to the trailer."