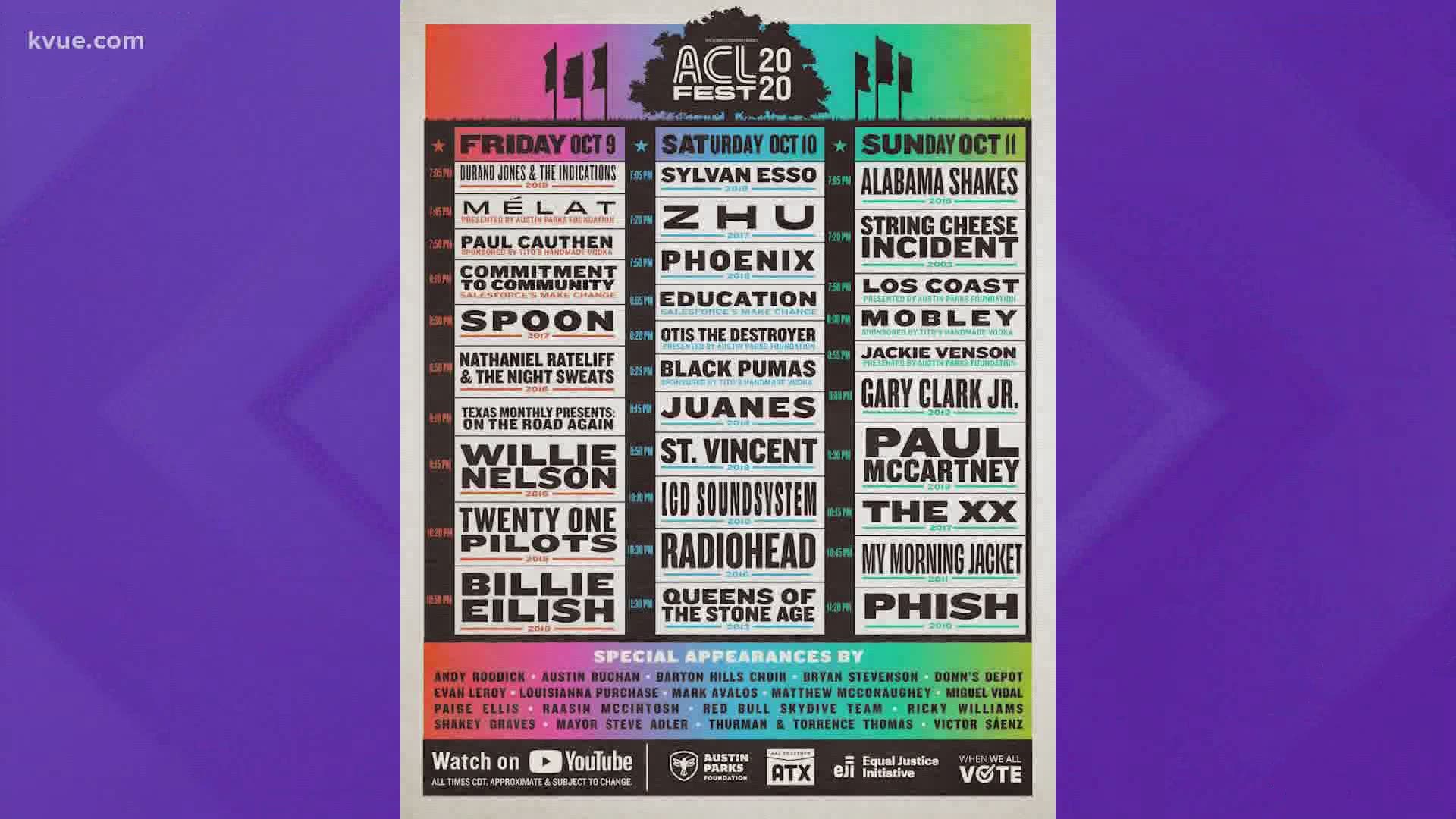 During a livestream event on Tuesday morning for HAAM Day (Health Alliance for Austin Musicians), a spokesperson for C3 Presents announced that the company is working on a virtual festival.

According to KVUE's news partners at the Austin American-Statesman, Emmett Beliveau of C3 said to keep an eye on the ACL website for the latest news.

In September, ACL announced the festival would be held Oct. 9-11. No other details were released, however, except to say the broadcast will be free.

"A year without Austin City Limits Music Festival is hard to imagine," ACL said. "Since 2002, we haven’t let rain, heat, cold, dust or mud stop us from gathering for a weekend of live music in Zilker Park. This year, the safest place to be is at home."

The Official #ACLFest 2020 Schedule is out now! ✨ Set your reminder on YouTube and watch for free starting Friday at 7pm CT: https://t.co/52dy5jprCA 👈 pic.twitter.com/kNms8LQpZr

The Twitter announcement said the festival would be free on YouTube, starting Friday Oct. 6 at 7 p.m. CST.

This wouldn't be the first virtual festival C3 has helped produce. A virtual version of Lollapalooza took place July 30 through Aug. 2, featuring streamed performances by Paul McCartney, Chance the Rapper, Alabama Shakes and even Austin's own Gary Clark Jr.

A statement on the ACL site announcing this year's cancellation reads:

"Austin City Limits Music Festival will no longer take place in 2020. We would have loved to put on another memorable show this year, however, with the uncertainty surrounding the current situation in Texas, this decision is the only responsible solution. The health and safety of our fans, artists, partners, staff and the entire Austin community remains our highest priority.

"ACL Fest has always been rooted in tradition, our common love of live music, and our community. This includes supporting Austin Parks Foundation for the past 15 years to improve parks and green spaces across the city. Take this time to maintain your personal health and wellness by visiting www.austinparks.org to learn how you can safely enjoy and support parks in our area, and please continue to follow the advice of local officials, look out for each other, and stay safe."