Can you solve the Art Heist at the Tobin?

Several interactive shows are being held outdoors and socially distanced due to the coronavirus pandemic. 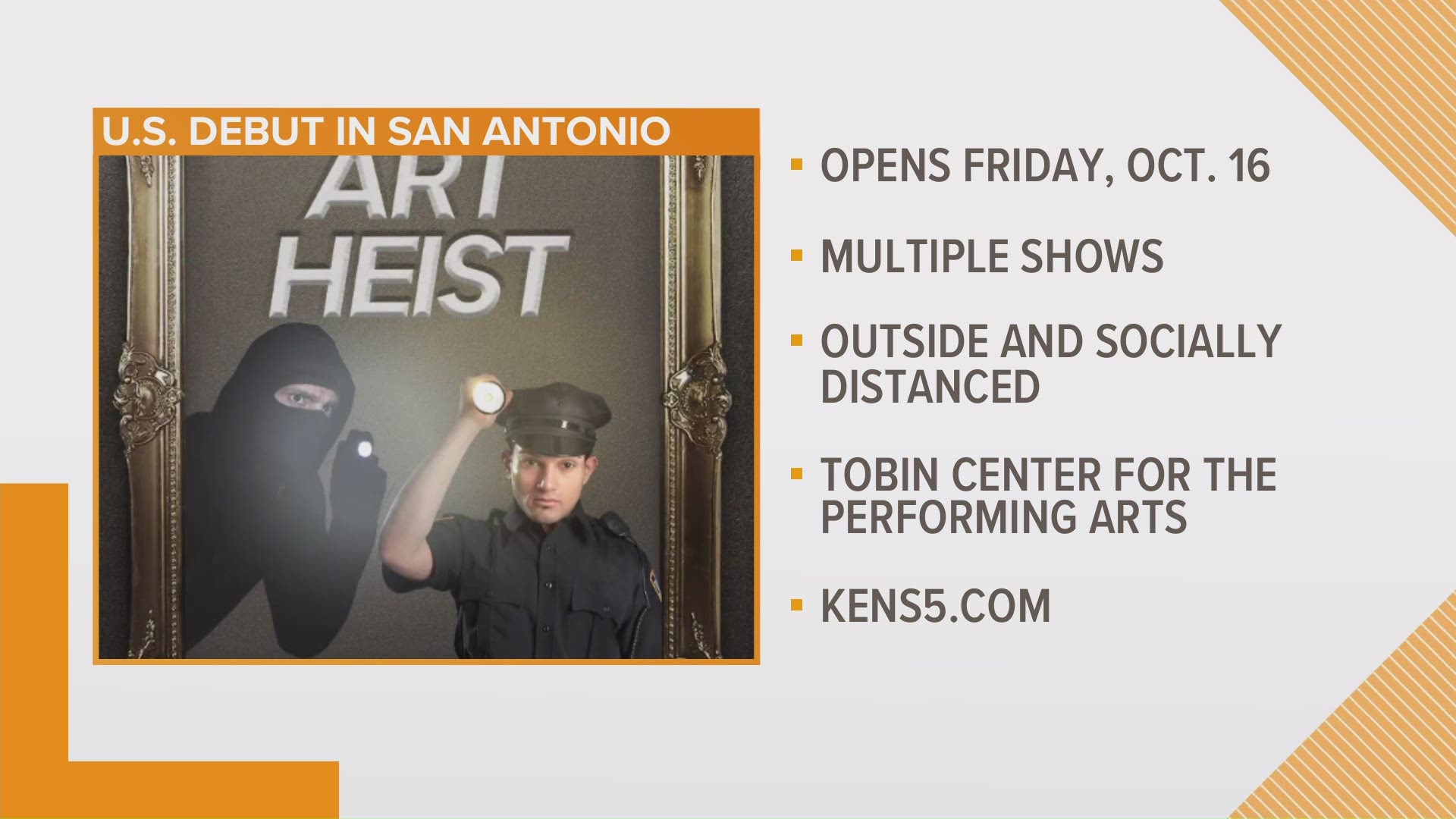 SAN ANTONIO — If escape rooms are your thing, or solving a mystery that’s actually based on a true story sounds intriguing - you may want to check out a new show coming to the Tobin Center.

“Art Heist” is being held as an outdoor event, socially distanced of course, because of the ongoing coronavirus pandemic. The show was originally scheduled to run for 10 days from Friday, October 16 to Sunday, October 25 - but now it's been extended to end on November 1.

It’s pegged as a “true crime walking show” where socially distanced groups can “walk off the quarantine poundage” by moving through five walkable locations to gather clues. The goal? To use your detective skills to search for a criminal mastermind in the all-new interactive theater show.

"The audience will get to interact with the characters, ask questions, come up with their own conclusions," said Marisela Barrera, an actor in the San Antonio production.

Art Heist’s San Antonio stop is the first in the U.S. It comes after a sold-out run at the Vancouver Fringe Festival. Participants will aim to crack the case of the world’s biggest art caper who made off with 13 works of art, valued at $500 million.

Thirteen works of art stolen. Worth half a billion dollars. Not one item recovered. Not one arrest made. Can you crack...

In a news release, the Tobin Center summed up the back story and what people can expect:

The story is based on the biggest art heist in history that took place on March 18, 1990, when two thieves disguised as police officers entered Boston’s Isabella Stewart Gardner Museum in the middle of the night, telling guards they were investigating a disturbance. Valued at a half a billion dollars, 13 works of art, including paintings by Rembrandt, Vermeer and Manet were stolen. The $500 million pieces as well as the robbers remain at large today.

"It's based on one of the greatest art heist of all time," said Barrera.  This crime has not actually been solved, so we challenge the audience to come up with their own conclusions."

Actors, through conversations along the way, will reveal clues to the detective audience but then again, a red herring or two might present itself. Sharp sleuths will guess who the liars are and ultimately solve the enigma. No two performances will ever be the same as the actors improvise with every interaction.

Some of the characters, or shall we say, “suspects” - are a wild group of wily career criminals, slimy con men, rumpled art recovery specialists, a possible inside man, a gentle psychopath and the larger-than-life, but definitely real self-proclaimed, "Greatest Art Thief of All Time."

Art Heist was born out of the pivoting the theatre arts community has had to do to survive the pandemic.

"In these times, we're looking to create new opportunities, not only for audiences to enjoy theatre experiences, but also for the local actors and crew members out there who have found themselves out of work. It's been a very tough time for our industry,” Justin Sudds, one of the show’s producers, said.

Art Heist’s director, TJ Dawe, agrees, but is hopeful the artists’ drive and flexibility will make all the difference.

“COVID-19 has changed the game for everyone in the arts,” Dawe added. “Many of the elements we took for granted are gone, or at least on hold for the foreseeable future. Fortunately, there’s nothing like a career as a freelancing artist working in new theatre to cultivate adaptability and openness to innovation. With that mentality, every project is a unique challenge already.”

The Tobin Center for the Performing Arts says, “each show group is limited to assure appropriate social distancing and safety.”